How to deploy the latest Internet Explorer with updates

Home Blog How to deploy the latest Internet Explorer with updates

Kyle Beckman  Wed, Aug 28 2013Wed, Aug 28 2013  browser, deployment, password  3
Updating to the latest Internet Explorer as soon as it is released isn’t always feasible for every organization. In this article, I’ll cover how to update your PC’s to the latest version or IE with the latest patches when you are ready to upgrade.

If your organization is like mine, you probably aren’t running out to install the latest version of Internet Explorer on all your computers as soon as it is available for download. Chances are, you have internal web-based applications that are either developed in-house or by a 3rd party vendor that, at the very least, will need testing and possibly updates so that they will be fully compatible.

So, fast forward a few months and your applications are ready to support the latest IE! There’s only one problem, Microsoft has now released several updates and you need to make sure that all your computers have the latest and greatest updates when you deploy IE.

Yeah right, huh? For a handful of computers, this is probably feasible (especially for your testing group). But, if you support more than a couple of dozen, you’ll probably want a more automated process.

Method 1 for updating manually is to run Windows Update to install the update. Just remember, if you’ve hidden IE updates, you’ll need to go into ‘Restore hidden updates’ to make them appear again. 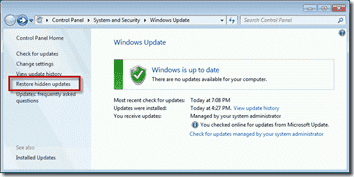 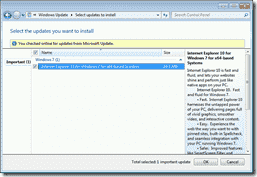 After running the update, you’re done! 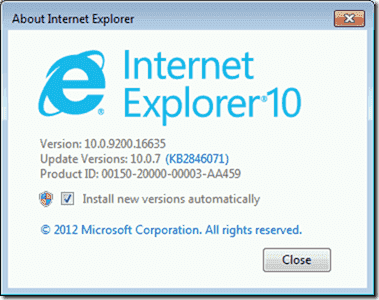 Method 2 involves downloading IE manually and running the executable. In the event that Windows Update is disabled in your environment or otherwise not a viable way to install an IE update manually, IE 9 can be downloaded here and IE 10 can be downloaded here. Future versions will be listed on the main IE download page.

In both of these scenarios, the installer accesses Microsoft update servers, downloads the latest updates, and includes them as part of the install process.

Deploy with a system management tool ^

If you’re using a systems management product like System Center Configuration Manager, LANDesk, Altiris, or PDQ Deploy, to deploy software, you can use also it to push out an install Internet Explorer.

First, we’ll need to download the installer from Microsoft (see the Update Manually section). Running the installer with the /? switch will show you all of the options that are available for installing IE. 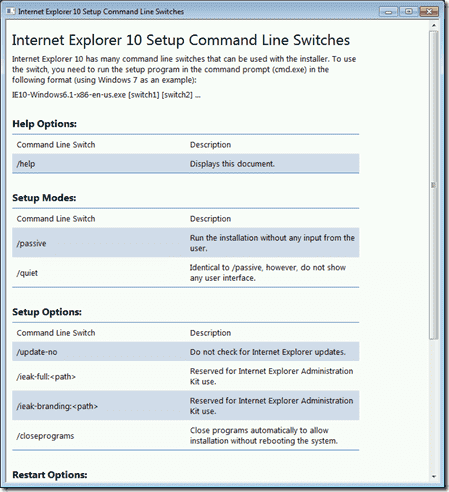 The key switches you’ll want are:

In my typical deployment, I use /quiet and /forcerestart and schedule the install for an off-service time of the day. So, the installer with switches would look something like this:

This would update Internet Explorer to version 10 on Windows 7 x64 with no UI visible to the user and force a restart if one is necessary. The key with this method of install is that the client system has to have an Internet connection. During the install process, the installer reaches out to Microsoft update servers and pulls down the latest IE cumulative update.

In the event you have clients that can’t access the Internet or are firewalled/proxied in some way that prevents them from accessing Microsoft update servers, you’ll need to include the latest Internet Explorer Cumulative Security Update as part of your update.

When installing IE, you’ll need to ensure that the installer is set to not update and not reboot. For example:

Once the update completes, you’ll need to deploy the .msu file that contains the IE cumulative security update. MSU files can be scripted by using wsua.exe; running that executable with a /? gives us the command line switches that are available. 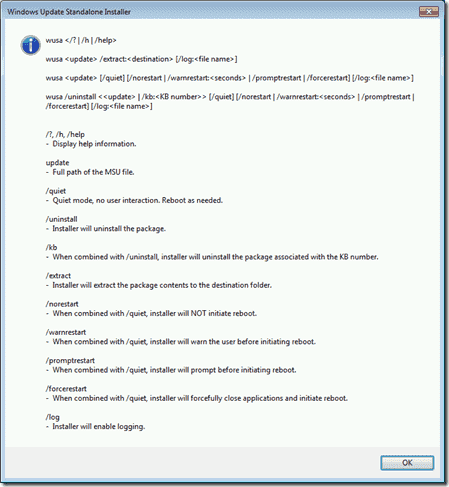 To install the update, run the wusa.exe command followed by the path to the update, a switch to set the display level, and a switch the make the system reboot if necessary.

Once the system reboots, it will have IE with the latest cumulative update.