Sander Berkouwer  Thu, Aug 29 2013Thu, Aug 29 2013  security  1
With Windows 8, Microsoft introduces a slew of new security features that are aimed to prevent malware from infecting and spreading. One of these features is Secure Boot. Let’s look at what this feature does, its hardware and software requirements, and how to enable or disable it.
Contents

What Secure Boot does

Secure Boot introduces digitally signed kernel files for Windows PE, Windows RT, Windows 8, and Windows Server 2012. These files are typically used when booting the computer, before Windows 8 boots. When Windows 8 boots, all the typical security measures we’ve known to date (such as UAC, BitLocker, ASLR, Service Hardening, EMET, and Windows Defender) will be effective; however, before that, the computer is vulnerable to boot kits and root kits.

The implication of signed files is that you need a key to decrypt them, based on the principles of Public Key Infrastructure (PKI). These keys need to be stored in the firmware of your computer. Unfortunately, the BIOS technology (dating back to 1981) doesn’t offer the ability to store encryption keys natively or to use these types of keys during boot. This introduces a significant requirement on your computer: you will need to use (U)EFI, the successor to BIOS.

Manufacturers of UEFI include these three databases with Secure Boot keys:

The integrity of the databases is ensured by a Platform Key (PK) that is generated by the UEFI manufacturer when the firmware is finalized.

Microsoft has worked intensively with hardware manufacturers to support Secure Boot implementations for UEFI-enabled desktops, notebooks, and tablets by adding a list of keys that identify trusted hardware, firmware, and operating system loader code and a list of keys to identify known malware. This way, Microsoft has ensured Windows 8 will work with Secure Boot on computers meeting the UEFI v2.3.1 Errata B standard.

One of the implications of using Secure Boot is that you can no longer dual boot older Windows versions, and you can no longer boot from Linux-based installation media or Linux-based Operating System installations. Microsoft, with its intense grip on the PC ecosystem, has ensured its keys made it to the UEFI implementations. Other operating system vendors (such as the organizations in the more fragmented Linux ecosystem) have had less of an impact on UEFI manufacturers.

The implementation of the Secure Boot standard within UEFI has led to a big controversy, where several people in the Open Source community have accused Microsoft of wanting to eradicate the Open Source ecosystem. It’s true that Microsoft forces hardware vendors to enable UEFI with Secure Boot by default (among other requirements) to make their hardware wear the Certified for Windows 8 stickers.

However, Linux organizations can contact hardware vendors themselves to get their keys included with firmware updates. Microsoft offers a program where keys can be included for a $99 fee, like Red Hat has done.

Working around the Secure Boot limitations

Secure Boot isn’t a required feature for x86 and x64 versions of Windows. On hardware capable of running these operating systems, you can disable Secure Boot in the UEFI of the computer, which allows you to run any boot loader code. On ARM-based hardware capable of running Windows RT, you cannot disable Secure Boot, and thus you cannot dual boot this hardware with Windows RT and untrusted kernel code.

When a computer is started, Secure Boot checks the integrity of the UEFI firmware by using the PK. If this check fails, you will need to restore the firmware to a trusted firmware. Next, UEFI will check the integrity of the Windows Boot Loader files by decrypting them and validating them against the key databases. If this check fails, a backup of the Windows Boot Manager will be used.

With these two checks passed, Windows can now boot. However, if there’s a problem with the drivers or kernel files, the Windows Recovery Environment (Windows RE) is loaded to recover trusted versions of these files. Now Windows can enable anti-malware through the Early Launch Anti-Malware feature (also new in Windows 8) before other files. Eventually, the use mode processes are started.

Checking if Secure Boot is enabled or disabled

Since it’s not easy to see if the system is capable of Secure Boot or if Secure Boot is enabled, Microsoft has included a handy little PowerShell cmdlet to check this—specifically, Confirm-SecureBootUEFI. 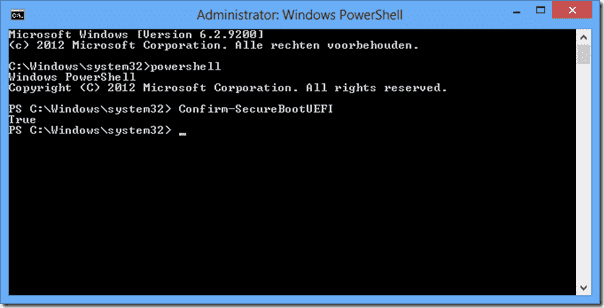 When you run this command, you get one of three results:

How to enable Secure Boot

When the Confirm-SecureBootUEFI returns Cmdlet not supported on this platform, however, enabling Secure Boot is slightly more work. You may need to update the UEFI firmware and then enable the Secure Boot option. You’ll also need to reimplement Windows as a UEFI installation. Check the article by Wolfgang Sommergut to see how.

How to disable Secure Boot

Disabling Secure Boot can be done in two steps:

This will allow the system to dual boot with operating systems that are not Secure Boot capable, such as previous Windows versions and several Linux distributions.