How to remove Windows 8 apps before you run sysprep

Michael Pietroforte  Tue, Aug 27 2013Tue, Aug 27 2013  deployment  11
In a recent article, we explained how to uninstall Windows 8 apps. In today’s post, I will show you what things you have to consider if you plan to remove all Windows 8 apps before you run sysprep to prepare a reference image for OS deployment. Even if you don’t plan to uninstall built-in apps, you have to know that sysprep in Windows 8 works differently than in previous Windows versions.
Contents

Please notice that I will use the Windows 8 app terminology I introduced in a previous article.

Why you should remove unnecessary apps

Most of the built-in Windows 8 apps are not really needed in business environments. In my view, the only applications and apps that should be deployed in corporate networks are those that employees need to get their work done. It is not just that people waste time playing with apps; this is also about security because every additional program is a potential security risk.

In large organizations, unnecessary apps can also result in significant cost if users call the help desk to inquire about the apps. For instance, a user who logs on to a Windows 8 machine for the first time might think that the mail app is, well, for accessing his mails. Yeah, users can be quite smart sometimes. I mean, how could he know that his admins have tricked him by putting a mail icon right in front of his nose that he is not supposed to click if he wants to read his mail?

When you prepare your reference image, you should uninstall all unnecessary built-in apps. In the vast majority of cases, this will be all apps. Unfortunately, uninstalling apps is a bit more complicated than removing applications; most of the problems are related to the fact that apps are installed per user, not per machine as with applications.

If you don’t heed the advice given here, you might run into the following error message:

System Preparation Tool 3.14 – A fatal error occurred while trying to sysprep the machine

Microsoft published a comprehensive KB article about the mistakes that can cause the error. The article can be summarized in three points:

I don’t cover sideloaded apps here because most admins don’t have to deal with them at the moment.

The main point here is that you had better not install apps on your reference image before you run sysprep. Unlike applications, you can’t deploy Windows Store apps with the OS image by just installing them for the sysprep user. For this, you have to provision Windows Store apps, which is a topic for another post. Although you can install apps and updates for the sysprep user, sysprep will remove these added apps anyway.

If you created other users and logged on with their accounts, you already have a problem even if you never touched the Windows Store app. Whenever a new user logs on the first time, Windows 8 will install all provisioned apps for this user. If you then uninstall the apps for the sysprep user and remove all provisioned apps, the apps are still installed for the second user, and sysprep will run into the error mentioned above. Essentially, the error occurs because the Windows 8 sysprep tool can’t clean out installed and updated apps for users other than the one who runs sysprep.

Thus, if you want to deploy Windows 8 with user accounts, you must not log on with these accounts before you run sysprep. If you already did, and you want to remove provisioned apps, you have to log on with each user and uninstall those apps. (See the PowerShell command below.)

If you don’t need these local accounts in your reference image, the KB article recommends deleting these user accounts. However, what the KB article doesn’t mention is how to delete them. If you remove these users in the wrong way, your problem won’t be solved. It is essential that you delete the users through the Control Panel user application because only this tool allows you to delete all files associated with the account. For instance, if you delete the users through the Computer Management application and then delete the user profiles manually, sysprep will still fail because the installed Windows 8 apps for these users are still on the system.

Rick Claus recommends in a blog post to not connect the Windows 8 computer with your reference image to the Internet because automatic updates of Windows 8 apps can cause issues for sysprep. However, according to my tests, sysprep doesn’t have problems with those updates. 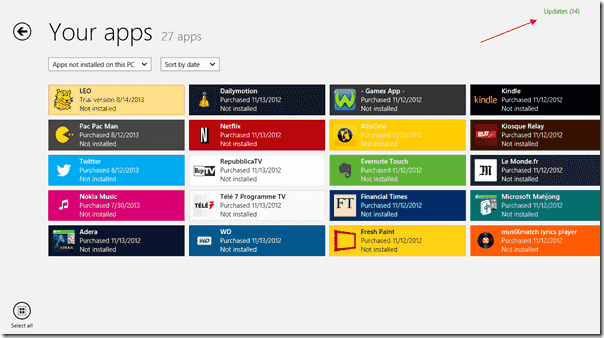 Updates of Windows 8 apps are available

If you expose a Windows 8 machine to the Internet for some time, Windows will stage updates. That is, it will download updates without installing them. This is useful because, when a user manually updates the app through the Windows Store app, the update files are already on the machine and don’t have to be downloaded. You can see available updates if you right-click on empty space in the Windows Store app and then click My Apps (see screenshot above). You might have to wait a while until the updates appear. You can also view the staged updates with this PowerShell command:

These staged updates will still be on the machine after you uninstalled all apps and removed all provisioned apps. However, since these updates are not assigned to any user on the system, sysprep has no problem with cleaning them out. If you want to get rid of staged updates anyway, you have to download the free PsExec tool and then run this command:

I guess this works because PsExec is impersonating the PowerShell commands.

If you want to remove all built-in apps, follow these steps:

Note: The if statement in step 2 ensure that only apps that can be uninstalled are listed. Frameworks can’t be removed because other apps depend on them. You also can’t uninstall apps with the PublisherId cw5n1h2txyewy (Windows Store and the Immersive Control Panel).

If you only want to remove some apps, follow these steps:

Note: You have to ensure in step 5 that you only unprovision apps that you uninstalled for all users in step 3.

Uninstall apps for all users with one PowerShell command?

The Get-AppXPackage cmdlet allows you to view the installed apps of all users on the computer buy using the –AllUser parameter. Unfortunately, the Remove-AppXPackage cmdlet doesn’t support this parameter, which is why it is not possible to use just one PowerShell command to uninstall apps of users other than the one you have logged on with.

Just in case you think that you use the PsExec command mentioned above, along with the impersonating trick, to remove all apps for all users on the machine, this does not work either. You really have to remove these users (and their associated files) in the Control Panel, or uninstall the apps for each user separately before you sysprep the machine.

All your efforts to remove the built-in apps are futile if you allow users to install apps, which is the default setting in Windows 8. As noted above, the procedures above don’t allow you to remove the Windows Store app.

If I learned something in 30 years of administering computers, it’s that one should avoid (at all costs) allowing users to manage their own computers.

Having users install apps might seem like a way to lighten an admin’s load. However, in my experience, this only leads to chaos over time. Sooner or later, your users will run into problems with all kinds of apps, and you will be the one who has to fix these problems for them. You will be responsible for apps you have never heard of, and often these apps are not really required to get the work done.

I think we agree that, with regard to security, it is disastrous to allow end users to install software. Tim Warner explained how you can prevent users from installing Windows 8 apps.