How to check the PowerShell version

Home Wiki How to check the PowerShell version

It is important for an administrator to know what Windows PowerShell and PowerShell edition and version are installed on a system, especially due to script compatibility. This article covers all the ways to check the PowerShell version on Windows, Linux, and MacOS and offers tips and tricks. The methods discussed here also work with PowerShell 7, 7.1 and 7.2

Leos Marek
Leos has started in the IT industry in 1995. For the past 15+ years he focused on Windows Server, VMware administration and security. Leos is a freelance expert working for banking institutions. He also runs an IT outsourcing company in Jicin, Czech Republic.

In general, we differentiate between two PowerShell editions:

The easiest way to check your PowerShell edition is to use an automatic variable, $PSEdition.

I will use the edition names throughout the post for clarity.

While it is relatively easy to get the correct version in Linux and MacOS, where you can only have the PowerShell edition, it might be a bit trickier in Windows, where you can have both the Desktop and Core editions.

Checking the PowerShell version in Windows ^

In Windows, there are four methods for getting the correct version of PowerShell:

Some of them are less reliable than others; some do not work properly when called remotely. Before moving forward with them, let's spend a moment discussing Windows PowerShell vs. PowerShell.

As discussed above, Windows is the only system where you can install both PowerShell editions. So, which of them will you query? Will the query return a version of both? This might be a bit misleading, especially for less experienced administrators.

So, locally, this is easy—it depends on which PowerShell you start and run the query in. Remotely, it is a different story, as you will see below.

In PowerShell, a host is a program hosting the PowerShell engine. Visual Studio Code with an integrated terminal is an example of a host. The Get-Host cmdlet returns information about the host, including the version. To display only PowerShell, you can run this command: 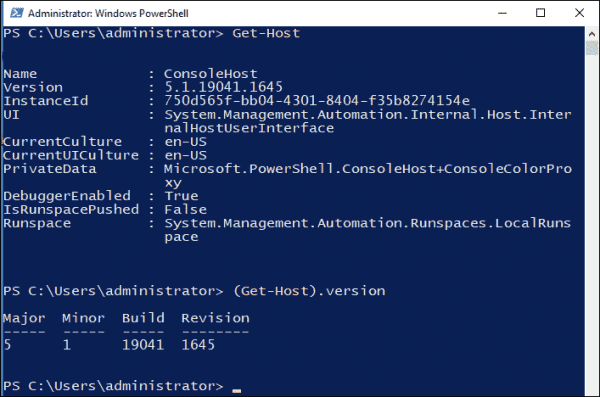 Using the Get Host cmdlet

However, the cmdlet returns the version of the host you are running, not the PowerShell engine itself. These might be different. Also, this cmdlet does not work remotely—it always returns version 1.0.0.0, even on Windows Server 2022.

The $Host variable is an automatic variable, which is the same object that Get-Host returns. As the methods are interchangeable, they might not return the correct engine version, and they don't work remotely. I do not recommend using these at all. To display the contents of the $Host variable, you can just enter it on the PowerShell console. 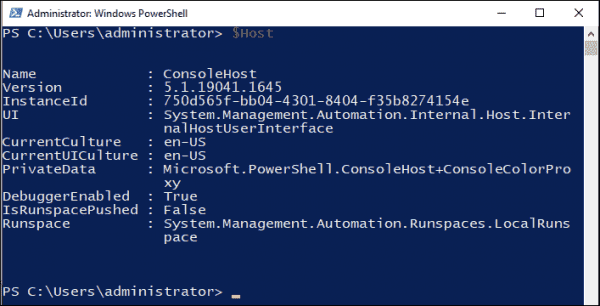 Another option is to use the registry. There are three basic ways to get such information—graphically with regedit, command line with reg query, and PowerShell. As this post is all about PowerShell, let's look at that method.

Watch out—running such a command will only return the Desktop edition version. However, new registry keys were added in PowerShell 7.1, and we can now also query the registry for Core installation. The following code will:

Although this method is absolutely reliable regarding the returned version, its syntax is quite long for daily usage. Luckily, one other method is available.

Last, we'll look at what is probably the most useful method, another automatic variable called $PSVersionTable. This is a very reliable method that gives you not only the correct PowerShell engine version but also its edition (Desktop or Core). Run this command to expand the version property. 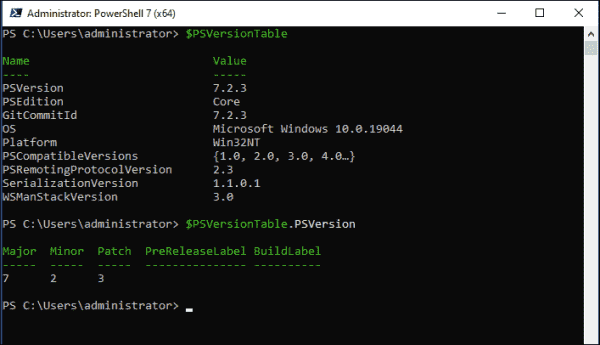 Checking the PowerShell version on a remote host

Querying a remote computer with $PSVersionTable

Watch out—In the screen capture, you can see that I have executed the command in PowerShell 7, but the result I got was version 5.1, which is the Desktop edition.

This happens because, by default, Invoke-Command always connects to the Windows PowerShell remoting endpoint unless otherwise specified. If I want to know what Core version I have installed on that server, I have to add the -ConfigurationName parameter to the command.

Below, a little code will query the remote system for all possible versions and editions.

This method is by far the most accurate and easiest to use.

Checking the PowerShell version on Linux ^

Linux only supports the Core edition of PowerShell. In addition, updating the PowerShell installation is usually an in-place upgrade, so in the end, you can have only one PowerShell version installed.

As Linux does not have registry, there are three methods we can use—Get-Host, the $host variable, and the $PSVersionTable variable. 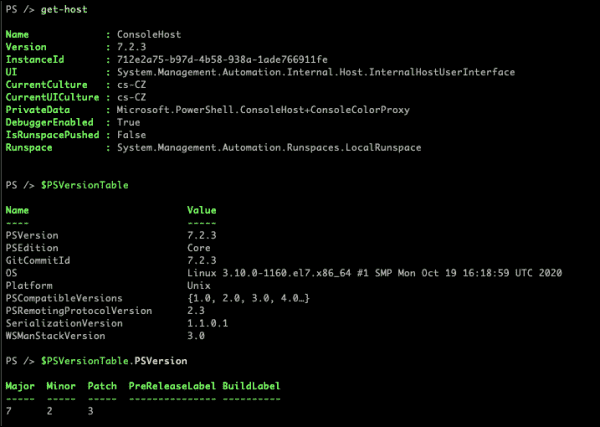 Getting the PowerShell version in Linux

All of these methods work in Linux. Regarding the Get-Host method, I would expect the same behavior in Linux as in Windows, especially remotely, but I haven't tested it.

Checking the PowerShell version on macOS ^

MacOS also only supports the Core edition of PowerShell. Just as in Linux, the new version is usually an in-place upgrade.

The methods in MacOS are also the same as in Linux—Get-Host, the $host variable, and the $PSVersionTable variable. 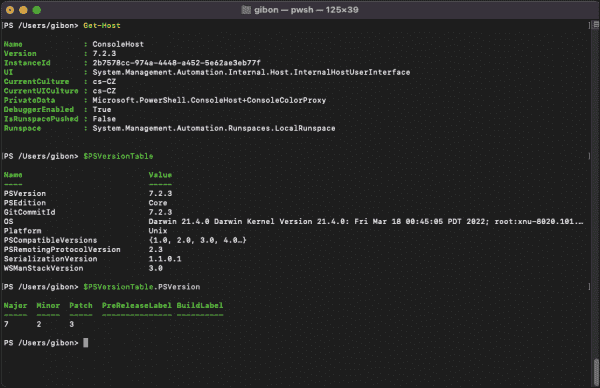 Getting the PowerShell version in MacOS

This post gives you a comprehensive guide on how to check the installed PowerShell version and edition on Windows, Linux, and macOS. You have also learned how to distinguish between the two editions and how to check the information remotely.