Michael Pietroforte  Tue, Mar 13 2012Wed, Mar 14 2012  windows 8  20
If you didn't start testing Windows 8 yet, then this guide is a must-read. This text is also a must-read if you already played with Windows 8 and started whining because everything is so different and strange.

As expected, there is lots of buzz about Windows 8. Not surprisingly, many are complaining about the huge changes in the user interface. Considering the large user base of Windows, there are always some people who don't like the changes and some who do like them. The ones who don't are usually louder. 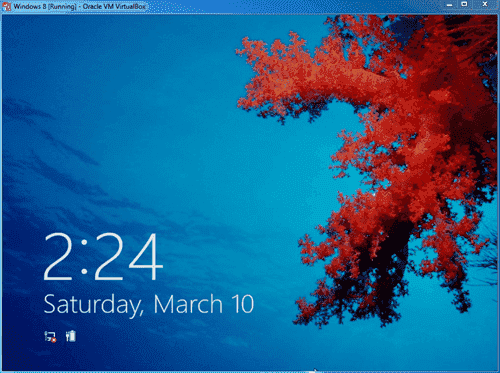 Before reading the reviews and making up your mind, I recommend testing Windows 8 yourself. If you have problems in finding your way, don't condemn Windows 8 prematurely. It usually takes some time until one gets used to a new user interface, especially if you have been working with a system for so many years. Suddenly many of your practiced habits and shortcuts no longer work. Of course, the first reaction is to wonder why all those changes were necessary. Is it just because Microsoft wants to appear as an innovative company, making changes just for the sake of changing things? And is it really necessary to completely change a successful operating system because of a handful of iPad sales?

I feel you should suppress your anger and seriously give the new user interface a chance. Once you are sure that you really know all about Windows 8, you can then proudly tell the world that you downgraded again to Windows XP.

The purpose of this post is to help you a little with your first steps in the first 8 minutes or so. The list of tips here is by no means complete. In my experience, it takes weeks, sometimes months, of daily work with an operating system (and the willingness to learn) to appreciate a new OS user interface.

The best way to test Windows 8 is on a dedicated machine and, if possible, on a tablet. But if this testing gear is not available, you can try Windows 8 with virtualization software. For this post, I assume that you are trying Windows 8 with an old-fashioned mouse and a keyboard in a VirtualBox VM.

Windows 8 works with Windows Server 2008 R2 Hyper-V, VMware Workstation 8.0, or Oracle VirtualBox 4.1.2 (or greater). VirtualBox is free and very easy to use. Thus, if you don't already work with one of the other two virtualization products, I suggest you follow Tim Warner's guide for how to install Windows 8 on VirtualBox. The guide was written for the Developer Preview, but it is still correct.

I'd just like to add that you should select the Intel PRO/1000 MT Desktop (82540EM) network interface instead of the default PCNet nic. When I tested the Consumer Preview on VirtualBox 4.1.7, Windows 8 wasn't able to install the driver for the virtual PCNet interface. You can find the corresponding settings under the Advanced tab of the virtual machine's network settings. 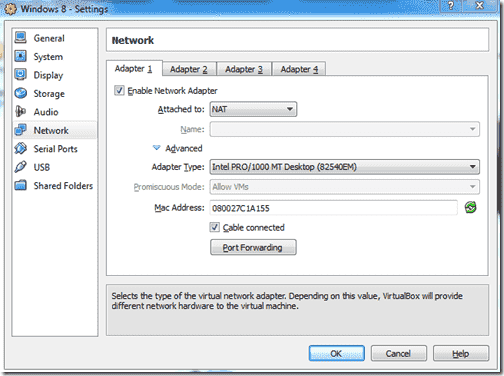 After Windows 8 boots up for the first time, you will see this beautiful tree with no hint on how to proceed. You just have to hit the space bar and the logon screen will appear. After you log in with the password you configured during the installation procedure, the new Metro start screen appears. This is the point where you will wonder if you accidentally installed Windows Phone. To assure you that you are really working with Windows 8, I suggest you immediately switch to Windows Desktop mode by clicking the "Desktop tile" in the lower left corner.

You can also use the key combination WIN+D or hover the mouse over the upper left or lower left corner of the desktop. To switch back to Metro mode, you just have to hit the WIN key. The strange thing is that you can now switch back and forth between Desktop mode and Metro mode by only hitting the WIN key (without D). If you do this right after you logged in, you will open the so-called Charms Bar. Is this a bug or perhaps a VirtualBox issue? 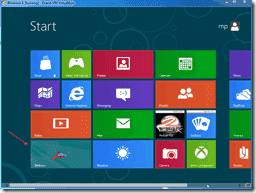 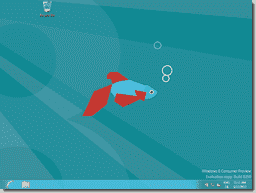 Anyway, since I already mentioned the Charms Bar, you can always open it with WIN+C or by hovering the mouse over the lower right desktop corner. The Charms Bar contains the Search, Share, Start, Devices, and Settings charms. As you can see, all rumors that Windows 8 no longer features a Start button were hopelessly exaggerated. Click the Start charm, et voilà, you are at the Metro start screen which is the new Start menu. 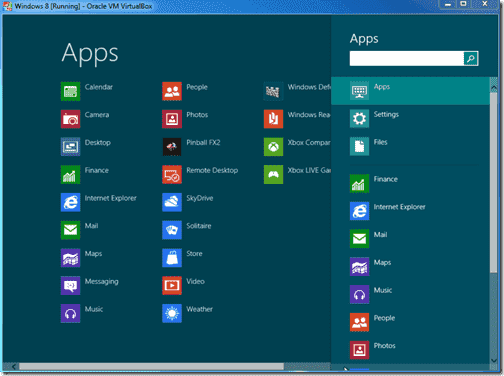 You see, this is one of the things you have to figure out first before you start whining about missing features. There is even the old Start Search field that allows you to find applications quickly. If you ask me, Start Search was the only thing that was helpful in the old Windows Start menu. You don't want to tell me that you really started applications by clicking your way through the Programs menu, do you?

So what is the first Windows 8 application you want to start? Notepad, of course! Just start typing "n...". Ah, you see, not so difficult, right? And you know what? Notepad didn't change at all. This is good news, isn't it? Yeah, now we all feel at home again.

By the way, you don't even need to switch to the Metro Start screen to invoke Start Search. You can just start typing when you are in Metro mode. Note that this doesn't work in Desktop mode. However, the key combination WIN+R still allows you to run programs in Desktop mode and Metro mode.

Windows 8 offers myriad keyboard shortcuts, and you probably will know many of them from Windows 7. I noticed that keyboard shortcuts are quite popular in Windows 8 beginner's guides. The reason is that Windows 8 was partly designed for touch. But if your old LCD screen is somewhat insensitive to your patting approaches, you are often faster with a keyboard shortcut than with the mouse.

Below are the shortcuts you might need during your first 8-minute tour of Windows 8. I already mentioned some of them above, but rehearsal is everything when it comes to learning how to deal with a new user interface.

The last combination (Alt+F4) might be the most important one in your first 8 minutes with Windows 8. After you start your first Metro app, you will most certainly wonder how to get rid of it because Metro apps have no close button. You can also close a Metro app by dragging the app from the top of the screen to the bottom (see Jack's comment).  Again, reports that you can't shut down Metro apps were exaggerated.

I also read that Windows 8 can't be shut down. Don't think that Microsoft steals every so-called innovation from Apple. They just hid the shutdown button to prevent you from stopping to use of Windows 8. You are lucky that you are reading a Windows 8 guide from a PC veteran with 30 years of experience. So I know the fastest way to shut down a PC: Press Ctrl+Alt+Del and then click the power button. If you are testing with VirtualBox, you have to press Right-Ctrl+Del instead of Ctrl+Alt-Del. 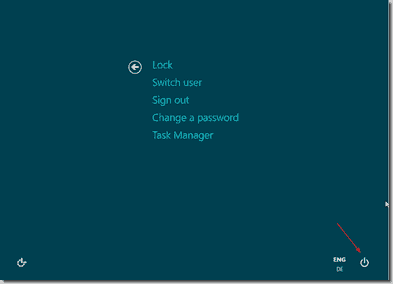 The official way appears to be to open the Charms Bar (WIN+C), click "Settings," and then click the power button. It makes sense somehow. Turning off a computer is just changing the "On" setting to "Off," right? Well, okay, I’m just trying my best to give you a good "user experience" during your first 8 minutes with Windows 8.

Leave a reply to Ron007 Click here to cancel the reply