Timothy Warner  Thu, Jul 6 2017Wed, Aug 16 2017  commands, patch management  2
WuInstall is a command-line tool that gives you back control when to install Windows updates. It thereby offers you the agility to react as fast as possible when a new, important security update becomes available.

Many of you probably use Windows Server Update Services (WSUS) for patch management in your domains. WSUS, along with Group Policy, gives you the ability to:

The WSUS approach, whether deployed on its own or orchestrated through System Center Configuration Manager, is a tried-and-true formula that suffers from one fatal flaw: a lack of agility.

Think of the recent WannaCry ransomware attack, for example. Microsoft released a fix to the underlying Windows operating system vulnerability in March for current Windows Server and Client versions, and they even released an out-of-band special update for legacy Windows versions.

In a case like this, you need the ability to download and patch systems as quickly as possible. This agility is one feature you get with HS2N WuInstall, a command-line client that gives Windows systems administrators lightning-fast control over the Windows Update cycle.

Go ahead and download a 30-day free trial at the WuInstall web site. Don't be shocked when you open the ZIP archive and see only executables. There is no installation because this is simply a monolithic command-line tool! There are three binaries:

For convenience, I suggest that you: 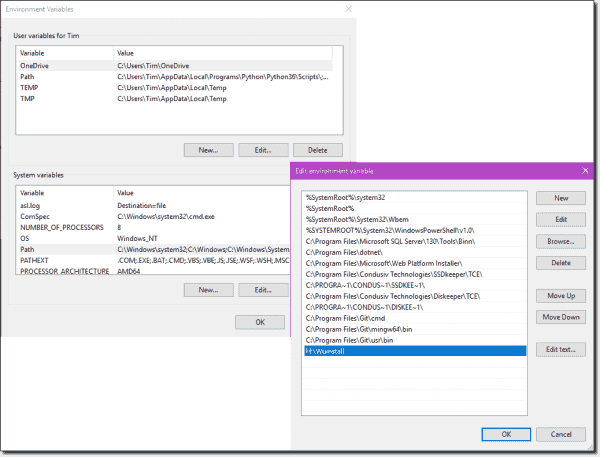 Add wuinstall.exe to your system PATH

Now open an administrative PowerShell console and type wuinstall. As shown in the following screenshot, you'll see the WUInstall splash screen. Now press Usage and take note: that's the command's full syntax. Of course, you can always hit the documentation. 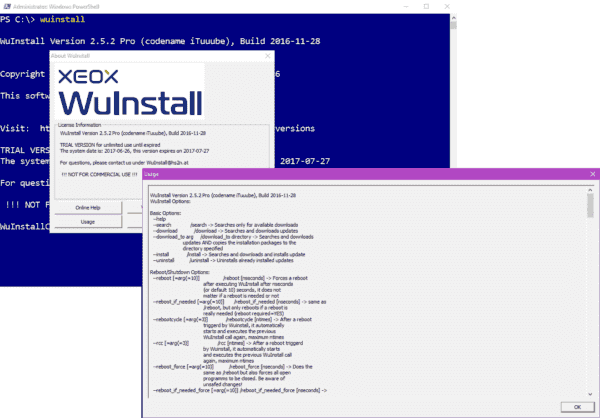 Run the following command to dump the help contents to a text file for easier study:

Before we go any further, let me be clear: WuInstall works either with or without WSUS. You'll want to make sure you have clearance in your IT department before you use WuInstall to override WSUS, however.

If you want to bypass WSUS, run this command:

Note that the bypass remains in effect only for the duration of the current command. 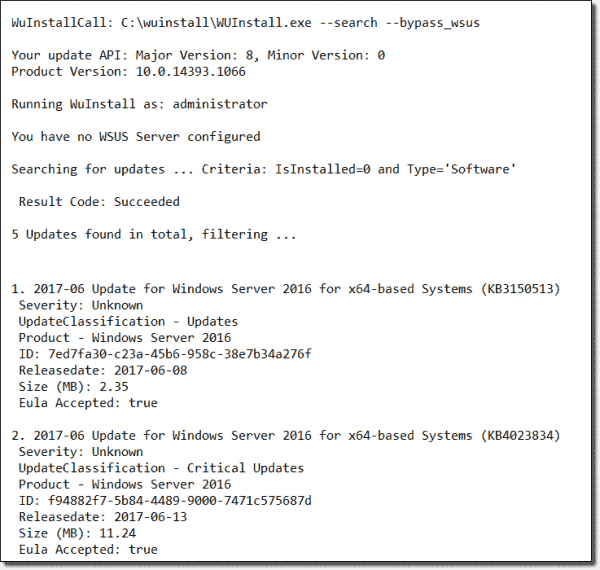 Here is partial output from when I ran a search on a Windows Server 2016 domain member server:

That final output line is significant; the --search switch only queries the update source but does not download anything.

Check the documentation, because you can add criteria for closer matches. For example, the following command searches WSUS or Microsoft Update for driver updates not already installed:

NOTE: You'll notice in the documentation that WUInstall parameters can use either a Linux-style double-dash (--) or the Windows-style slash (/).

Or we can target a specific Microsoft Knowledge Base (KB) number:

And then we can install one or more updates; if you don't specify a download location, WUInstall simply downloads the file and runs it.

Think of how useful WUInstall would be to deploy KB fixes quickly to address terrible malware outbreaks like WannaCry! 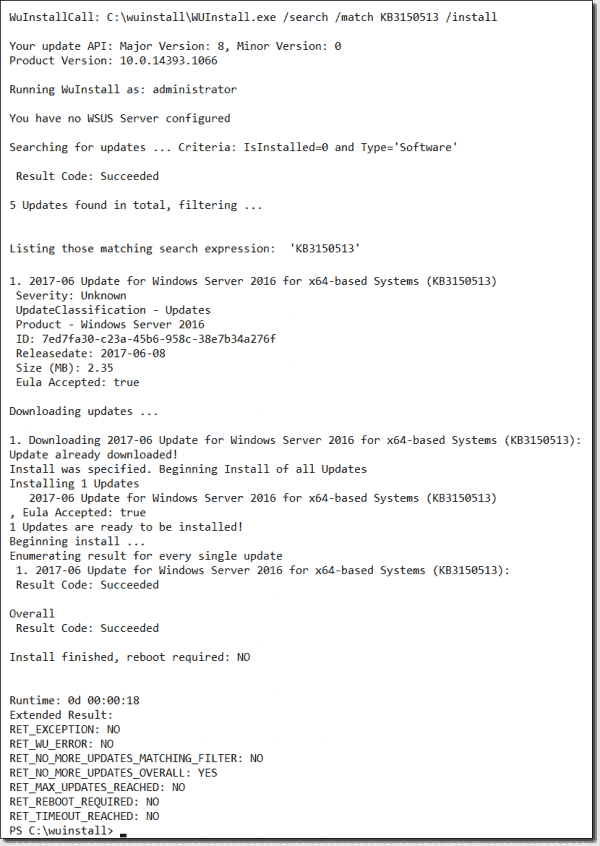 WUInstall works fundamentally differently from WSUS and Group Policy because the latter uses a client pull model. By contrast, you can script WUInstall to push Windows Updates to clients whenever you need to do so.

The WUInstall central cache feature gives non-WSUS businesses some of the bandwidth-saving goodness of WSUS by storing Windows Updates in a central location.

Here I define my E:\updates (shared as \\dc1\updates) as a central cache and download/populate any updates within it:

If you want another client to install its updates from the cache, run the following command:

By the way, if this second client needs updates that the initial station did not, then the second node will populate the shared cache with those new updates. Very cool!

One of the major annoyances that both end users and systems administrators share is Windows' tendency to restart automatically after applying certain Windows Updates. WUInstall gives you control over the update/restart cycle.

For example, if you know in advance that a restart is required, you can force the post-installation action with a 10-second default delay. Of course, the value is customizable:

You can also specify that the system restart only if necessary and set a limit as to how many restarts can happen in sequence. For instance:

I hope you're thinking to yourself, "Wow! I can leverage administrative scripting and PowerShell remoting to take full control over Windows Updates!" Yes…yes you can. WUInstall is pretty darned cool.

Read the WUInstall v2.x license agreement for details on pricing. The software has several license editions based on the number of computers you want to manage.