Alex Chaika  Thu, May 25 2017Thu, May 25 2017  patch management, powershell, powershell scripts, wsus  25
If you quickly want to find out if a particular update has been installed on all of your machines, the built-in reporting of Windows Server Update Services (WSUS) is not really helpful. However, you can use PowerShell to create a WSUS update report.

I wrote the PowerShell script I describe in this post due to the recent unfortunate events when the WannaCry ransomware infected literally hundreds of thousands of computers. As usual, the main reason was that people didn't install security updates on time.

To check the state of all of our computers, I tried to use WSUS reporting. However, I quickly found out that the tool is not very flexible. Thus, it is extremely arduous to get the report for all machines even if you are looking for just one particular KB number. As you can see below, the report choices are pretty poor: 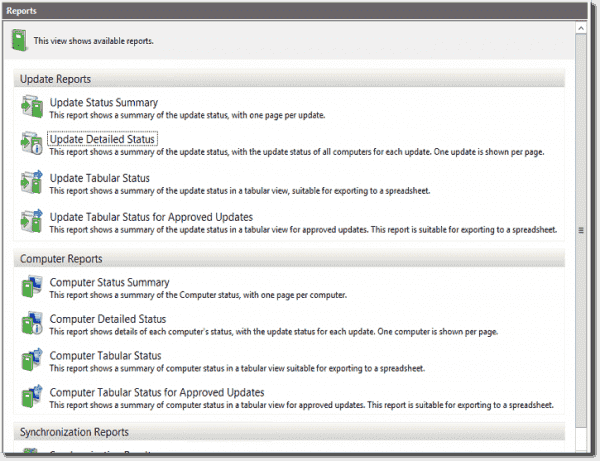 You need to create a report for every update of every operating system type. Imagine that you have many different Windows versions starting from Windows XP. It'll take you forever. Fortunately, you can use PowerShell to achieve your goal faster.

To simplify things a bit and enable reusing the same script in the future to produce reports for different KBs, I use a function that accepts the following parameters:

To be able to run this function successfully, you need the Windows Update Services MMC snap-in installed. Otherwise you can run it on the WSUS server. Please note that by default, this function connects to the WSUS server using unsecured HTTP. If you're using SSL, you have to change the $False to $True in the line that initializes the $wsus variable.

I prepare the $report variable in advance, to be able to save the results into it later, and then I load the Microsoft.Update services assembly. Next, I initialize the following three variables:

Next, I set up $UpdateScope.UpdateApprovalActions to "Install" because I'm interested only in those updates approved for installation.

I then start a foreach loop against the $kbnumber string array I intend to pass to the function. This provides all update objects that have the particular KB number in the title. 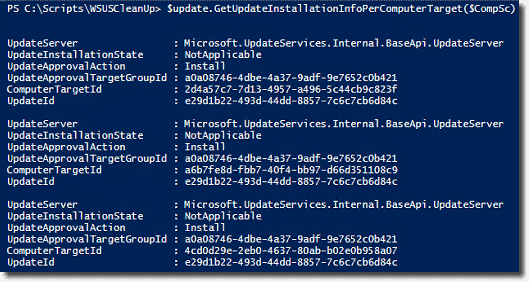 In the third loop (ForEach object) I pass this GUID to the getComputerTarget method of the update service object (that the $wsus variable represents). This reads several properties of the computer object, such as computer name, IP address, and update status information. Below you can see an example of the WSUS computer object:

Next, I create a custom PowerShell object and store it in the $info variable. The properties of the $info object then contain the computer object properties and update the status properties I need for the report. The $report variable then stores an array of my $info objects.

After the loops execute, I filter the $report variable to remove all records where UpdateInstallationStatus is set to Installed, Not Applicable, and Unknown. The remaining records are the computers that require the updates with the KB numbers you specify when you call the function.

In the screenshot below you see a sample report: 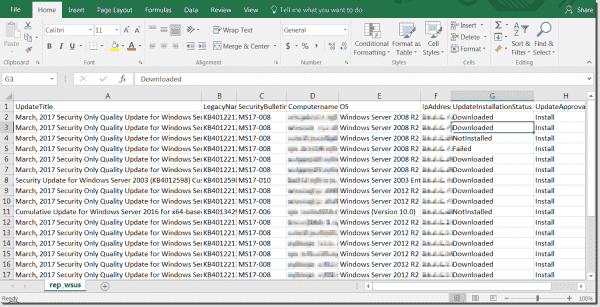 At the end of the script, I added three arrays with the KB numbers that are critical for mitigating the vulnerabilities used for the recent WannaCry ransomware outbreak. I obtained information on the KB numbers from the following official sources:

Leave a reply to Kenji Click here to cancel the reply