Anil Erduran  Mon, Jun 13 2016Mon, Jun 13 2016  commands, linux, windows 10  2
In my previous article, I introduced Bash for Windows 10. Since then, I have been playing with Bash on my primary Windows 10 computer (a Surface Pro 3) and I am amazed by all the opportunities it provides. In this post, I would like to talk about some cool things you can do with Bash on Windows 10.

Some of such cool things are native Linux tasks, which we are now able to test on Windows, and some things are present just for fun. In general, however, I believe that Bash is a new way for Windows Administrators to extend their abilities and is a great addition for Linux Administrators with regard to their developer environments.

It’s crucial for system administrators to monitor system resources and performance on a daily basis. Most of the important monitoring and debug commands on the native Linux distros also work on Windows 10 Bash.

The top command is a good way to see the running processes in an ordered list and get an overview of the load on your computer. It’s a dynamic output and updates continuously.

You can also use HTOP, which is a much more advanced process monitoring tool. It’s not installed by default on Windows 10 Bash, but you can simply install it using the following command: 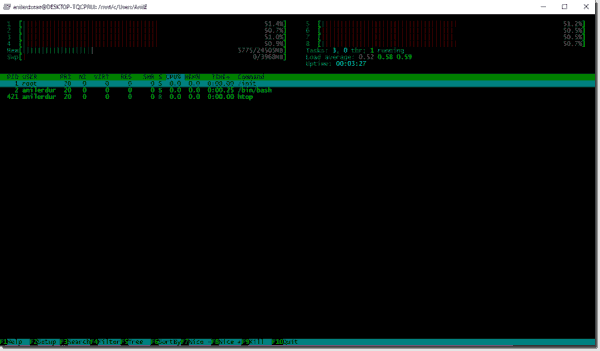 Also, with the simple command free, you can check how much memory you have available.

You can also run the following one-liner with the popular Linux command awk to see the available physical memory in KB:

By executing the ssh command, you are able to start to play with SSH in Windows Bash.

In the example below, I established an SSH connection to my Azure Ubuntu server from Windows 10 Bash: 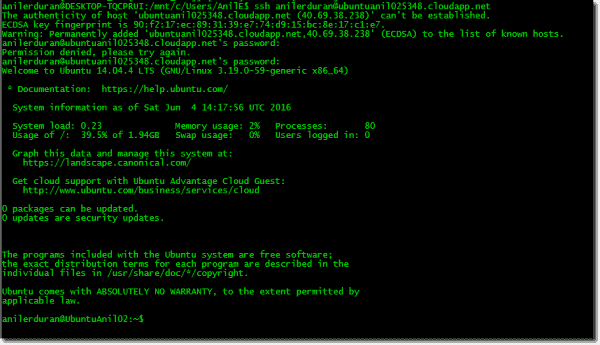 SSH from Bash to Azure

Python is my second favorite scripting language (my absolute favorite is  PowerShell). It’s very easy to transfer your PowerShell knowledge into Python as its syntax and logic are quite similar to that of PowerShell.

Python v2 and v3 come pre-installed with Ubuntu, which means that the Bash on your Windows 10 Insider build also has Python installed by default.

In Python, you can begin coding right away by simply typing “Python” or “Python3”.

One way to install and manage packages in Python is to use PIP (Preferred Installer Program). To install PIP with the dev tools, run the below command on your Bash:

And there you have it. You now have a ready-to-go Python environment on your Windows 10 computer. Are you interested in game development? Why not install the PYGame module? Here is a list of useful modules you can start with.

Well, there are a bunch of open source projects or efficient tools for data mining and data analysis but Python is probably one of the most versatile languages out there for machine learning. Moreover, Python and most of its machine learning libraries are free.

Scikit-learn is a free library for machine learning the Python language. It features various classification, regression, and clustering algorithms.

You can follow the instructions from the guide here to install it on your Windows 10 Bash, just as you would if you were using a Linux machine.

Installing the required packages for SciPy is the first step. SciPy is a Python-based ecosystem of open source software for mathematics, science, and engineering.

You can use PIP to install Scikit-learn:

You are now ready to go with your machine learning project on your Windows 10.

Scikit-learn has some built-in datasets for the classification and regression of supervised learning problems. 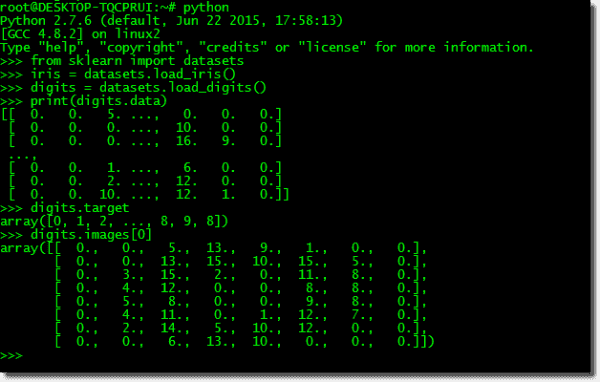 Digits.data shows the features that can be used to classify the digits samples.

Node.js is a popular open source runtime environment for developing web applications which can run on a wide variety of endpoints and devices.

Node.js is also installed on Windows 10 Bash by default. I just updated it using the apt-get upgrade -y nodejs command. 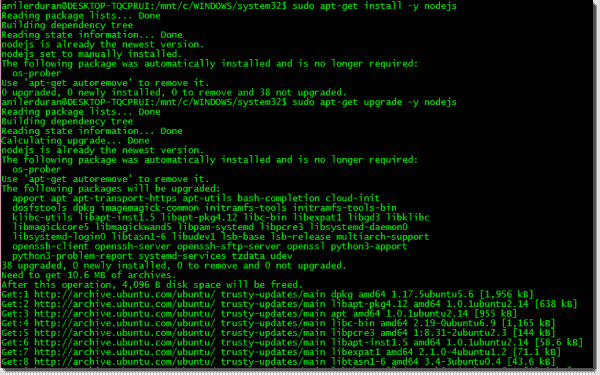 Let’s check the version number and see where our node is installed:

You can give it a try using a basic console.log command under node:

NPM is the package manager that developers use to share and reuse code. This reusable code comes in packages. You can search for packages in online repositories, use the command line to install them, and then do version management. In that way, you can also easily install Node.js applications.

Node.js comes with NPM installed, so you don’t need to worry about installing it separately on Windows 10.

Let’s check again where it’s installed and what version we have:

Listing of current packages on Bash (I just installed the node-PowerShell package):

You can search for packages online using the NPM search command. A local index will be built when you first run the command.

So now we have Node.js, NPM, and an Ubuntu Bash. Why don’t we use Azure cross platform CLI tools to interact with our Azure resources?

You can easily install the Azure-CLI from the NPM repository, which requires Node.js and NPM as prerequisites. In our case, we have everything in place on our Windows 10 Bash! Let’s start with the installation of the Azure CLI NPM package. 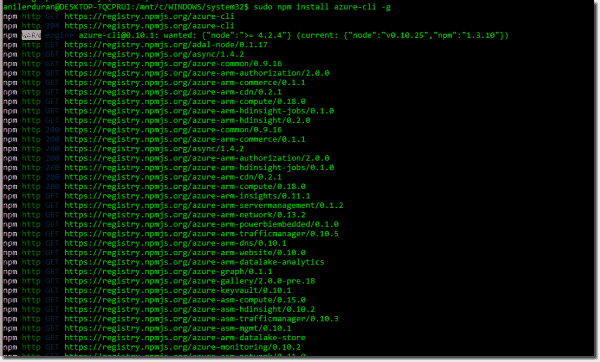 The error message "node: No such file or directory" is a known issue. To resolve this error, we need to create a symbolic link to /usr/bin/node by running the command below:

Now we are ready to go. Type “Azure”. 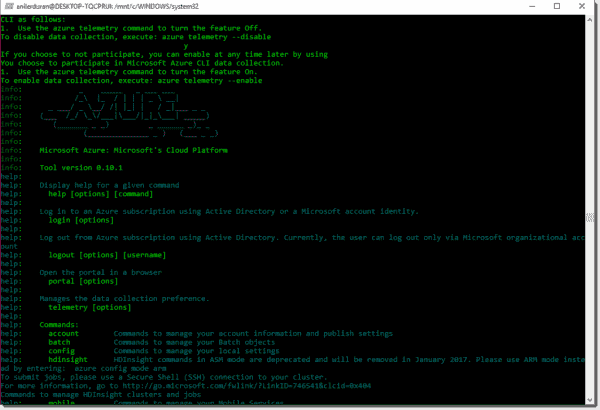 We can use the Azure CLI to connect to our Azure Subscription.

The Azure Login command will create an authentication code so that you can use it on http://aka.ms/devicelogin. 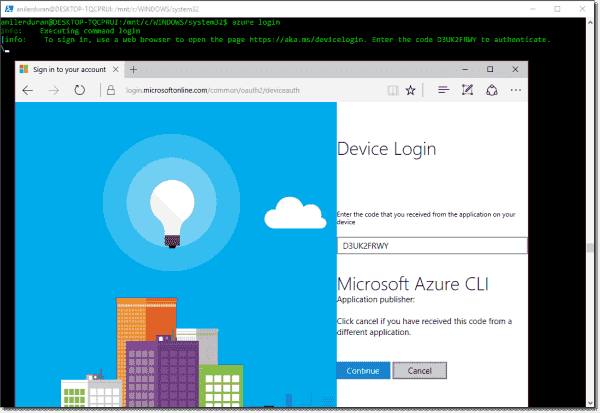 And I’m now connected to my subscription in Bash.

You can use two different command modes with the Azure CLI: Service Management and Resource Manager. Use the following command to set the command mode to ARM:

The next command lists my accounts:

For other available Azure CLI commands, please read this:

VIM is the enhanced version of vi, which is a popular text editor in Linux. There are several modes of VIM such as Command Mode, Insert Mode, and Visual Mode.

VIM is already installed on Windows 10 Bash and it supports all modes. You can also the use apt-get command to check whether you are using the latest version.

Type “VIM” to start, and play with it.

Here are the basic commands you can start with:

There is also an Easter egg in VIM help file. Type “:help 42” to access a special help menu (a quote from Douglas Adams, the author of The Hitchhiker's Guide to the Galaxy). 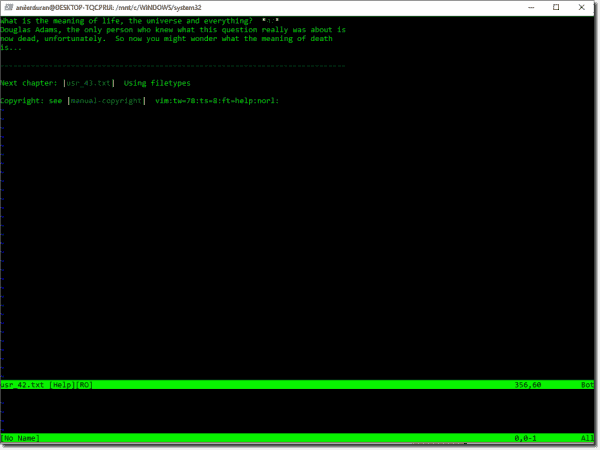 By default, the alias command shows a list of aliases in Bash that are defined for the current user.

To create your own alias, you can use following command:

To clear my screen, I simply configured “c”.

In the next post in this series, I will show you a few fun things that you can do with the Windows 10 Bash.