Kyle Beckman  Mon, Apr 28 2014Mon, Apr 28 2014  file tools, windows 8.1  4
Without much fanfare, Microsoft has finally released the Work Folders client for Windows 7. Now that it is here, you might be surprised about some of the limitations in the feature set of this release and how it may affect your BYOD strategy.
Contents

I was pleasantly surprised to hear that Microsoft has finally released the Work Folders client for Windows 7. I’ve talked to quite a few IT pros interested in Work Folders since my original series was posted back in January, and the main limitation I keep hearing over and over is that the only supported client OS is Windows 8.1. The release of Work Folders for Windows 7 tries to bridge that gap, but doesn’t go as far as it should.

The Work Folders client for Windows 7 can be downloaded by going to Microsoft support article 2891638. Both the x86 and x64 clients are available as .MSU files for Windows 7 Professional, Ultimate, and Enterprise and can be installed manually or through your system’s management product of choice, such as SCCM.

This PC must be joined to a domain

Expanding the error shows a recommendation that you can upgrade to Windows 8.1. The error message is as follows: “Alternatively, you can upgrade your PC to a version of Windows, such as Windows 8.1, that supports using Work Folders without a domain. (0x80c8033e)” 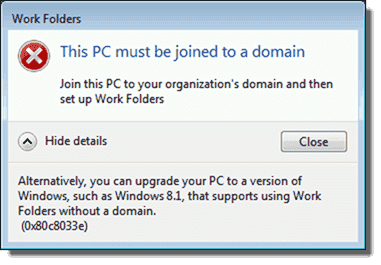 Alternatively, you can upgrade your PC...

The client setup for Work Folders for Windows 7 is identical to that for Windows 8.1. If you choose to configure Work Folders using Group Policy, the policies in Computer/User Configuration > Policies > Administrative Templates > Windows Components > Work Folders show that they are supported on at least Windows 8.1. The Group Policy templates included in Server 2012 R2 don’t include the updated OS support, but will indeed work with Windows 7. 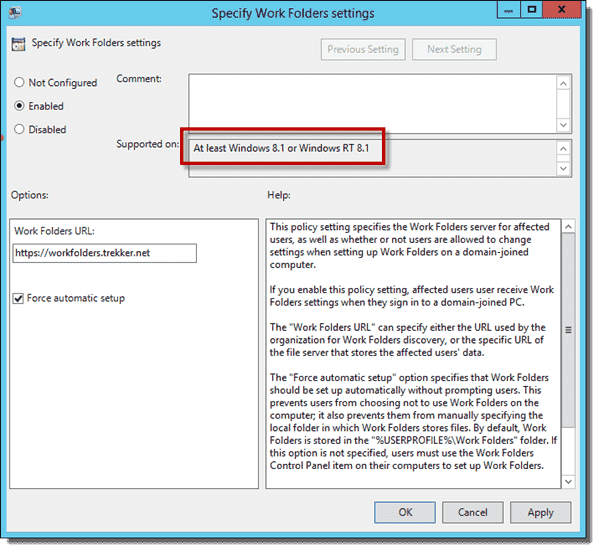 In addition to requiring that Windows 7 computers be domain joined, there are issues with enforcing password polices on Windows 7 devices using Work Folders. Windows 8.1 includes the Exchange ActiveSync (EAS) Policy Engine, which can enforce the settings from the Work Folders server; Windows 7 does not include this feature.

If you’ve set the “Automatically lock screen, and require a password” option, you’ll need to take additional steps for Windows 7 clients to sync. 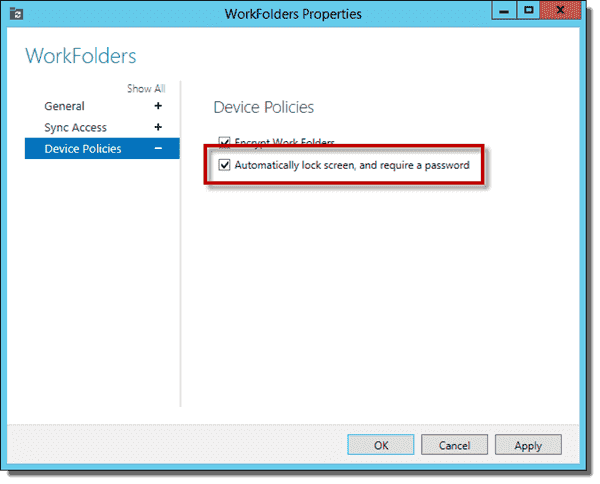 If you don’t take the additional step, you will receive this error: “There was a problem applying security policies. Work Folders can’t set up this PC because the server is using password policies that don’t work with Windows 7. Email your organization’s tech support for assistance. The PC cannot meet the compliance policies set by your organization. (0x80c80334)” 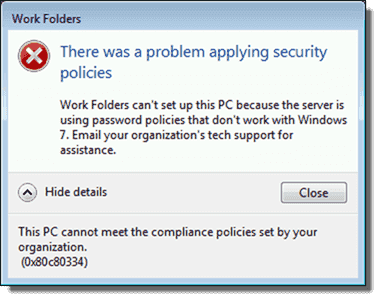 There was a problem applying security policies

Due to the lack of support for non-domain joined Windows 7 computers, lack of a Mac client, and no support for mobile OS’s such as Android, iOS, or Windows Phone, Work Folders really seems to have taken a step sideways instead of forward with the release of Work Folders for Windows 7. Many products on the market, such as Dropbox for Business, Citrix ShareFile, and even OneDrive for Business (formerly SkyDrive Pro), have the features Work Folders lacks. I still think it has the potential to be a great product, but it will continue to be a hard sell to management until these shortcomings can be addressed.