Today, I can just quote Kennedy because he expressed the essence of his stance in just two sentences:

Windows Vista is a bloated pig of an operating system. In fact, compared to Windows XP with Service Pack 2 or 3, Vista requires roughly twice the hardware resources to deliver comparable performance.

He knows what he is talking about, because he ran numerous performance tests. I have been discussing some comparable performance tests before, and I don’t want to go into this again, since I think that they are rather pointless.

There is a new Microsoft paper which addresses some of the criticisms that have been put forward against Vista. I find it interesting that MS is quite frank in this text, because usually they only claim that everyone loves Vista. Let me quote from this paper (note: the link is not working at the moment, here (PDF) is a copy):

We‘ve heard some of you say that Windows Vista runs slower than Windows XP on a given PC. So what‘s really happening here? First, we need to avoid comparing apples to oranges—Windows Vista is doing a lot more than Windows XP, and it requires resources to conduct these tasks. That said, it is important to make sure a PC running Windows Vista has enough horsepower to function properly, especially for older PCs running a minimal amount of RAM, since the Windows Vista footprint is larger, bottlenecks will occur.

Of course, Kennedy’s point is that Vista has no interesting new features which would justify the additional hardware requirements. A large part of his whole article is about this topic. I am trying to refute this view in my series of blog posts, so I won’t write about this today. However, there is one thing I find remarkable. On the one hand, he claims that Vista requires twice the hardware resources as XP does, and on the other hand, he says that are no real enhancements. It follows that half of the things Vista is doing all day is just a waste of resources.

All in all, there are 10 rounds in his article, but only 4 discuss new Vista features. Obviously, there are many more new features he doesn’t address. Of course, it is impossible to write about all of Vista’s enhancements in just one article. Books have been written about this topic. So I can’t really blame Kennedy for this. However, if you really want to prove that Vista wastes half of the available resources, you have no other choice than to discuss in detail the additional things Vista is doing, and then prove that most of them are useless. 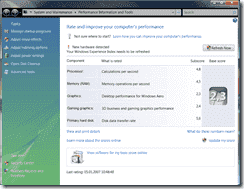 Note that we don’t just talk about Aero or Windows Search. You will certainly regain some of your resources if you disable these. But, even then, Vista will still be slower than XP. So if you have old hardware, which is not powerful enough, you had better let Vista alone. The point is, however, that if we compare both operating systems on a PC that is one or two years old and has at least 2GB RAM, then performance is not an issue at all. Yes, even then, you will be able to measure differences, but they simply don’t matter. It is a common false belief, and even IT pros such as Kennedy are not immune:

For every CPU cycle wasted bringing Vista's bloated image on par with XP's, you could be providing your users with an actual performance increase across their core applications.

CPU cycles on desktop computers in a corporate environment usually don’t matter. If your computer uses 30% or 15% of the available CPU resources, it simply makes no difference. There might be a few cases where performance is an issue on an office PC, but for a general argument against Vista you need a little more than that. In the fast majority of cases, you won’t realize the difference. That said, if Vista has just one feature that you find useful and if you have modern hardware, then you can forget everything that has been written about Vista's performance. Of course, it is another question whether or not you should buy new PCs just because of Vista. This certainly depends on the question of whether your organization benefits from Vista’s enhancements. But this is the topic of the other articles in this series.