Wolfgang Sommergut  Wed, Feb 10 2021Wed, Feb 10 2021  commands, powershell  1
Microsoft has updated its new console for basically all command lines and shells. The most important innovations in the current preview include a graphical user interface to configure the settings, automatic start-up actions, and several usability improvements.

Less than a year after the release of Windows Terminal 1.0, Microsoft is already shipping its fifth stable release. However, version 1.5, which is now intended for productive use, brings only moderate improvements.

The terminal now automatically recognizes URLs that can be opened in the browser by clicking the mouse while holding down the CTRL key. They can also be inserted into the respective shell via drag-and-drop, and the same applies to file names. 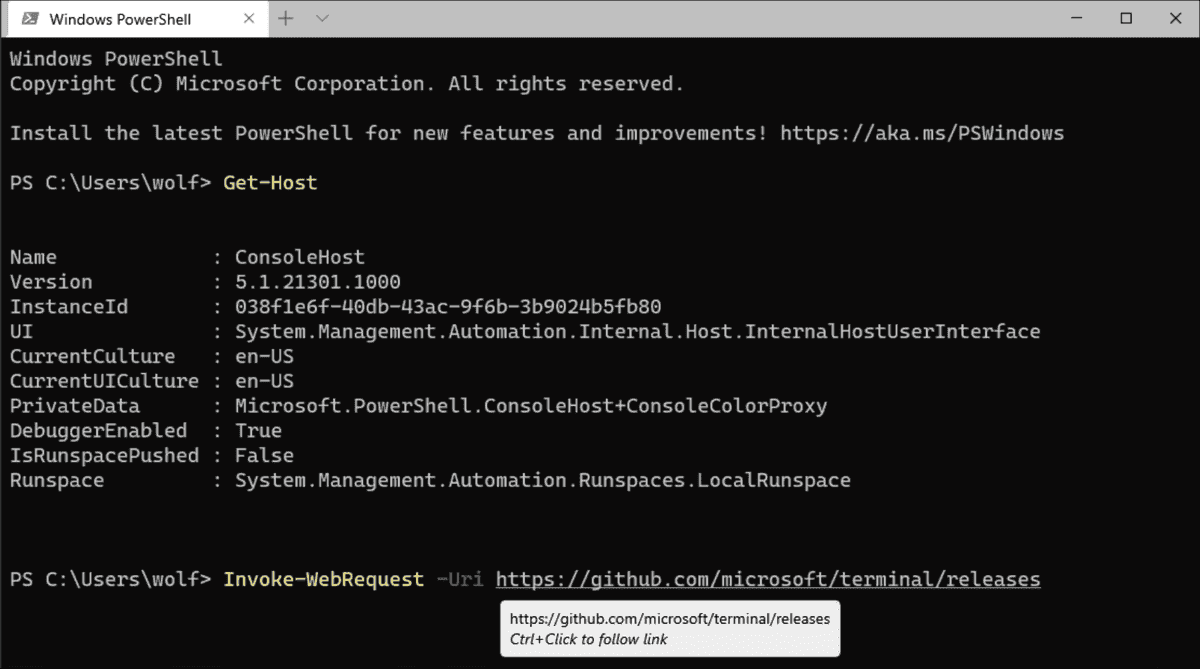 The v1.5 version of Windows Terminal recognizes URLs and can open them in the browser

Newly added features include more flexibility when switching between tabs or zooming into a split pane. In addition, Microsoft now provides a preinstallation kit so that Terminal can be integrated into Windows images via DISM or PowerShell.

Preview 1.6 comes with a new feature that has been at the top of users' wish lists—a graphical interface for configuring the settings. Until now, the JSON file responsible for this had to be edited manually.

Unlike the old Windows command line, Windows Terminal is not limited to a handful of options. Because of its numerous features, the lack of a settings GUI has probably been the biggest hurdle for its use so far.

Considerable complexity arises from the fact that it can integrate several shells by defining a separate profile for each of them. In addition, windows can be split vertically and horizontally (Shift + Alt + Plus or Minus). Furthermore, there are numerous key bindings, since practically every action can be linked to a key combination.

The developers have also invested a lot of effort in all kinds of graphical effects, including themes, background images, and various animations. Their benefit for a command line is sometimes questionable. Under these conditions, it was already a challenge if you just wanted to change the font size by editing settings.json. 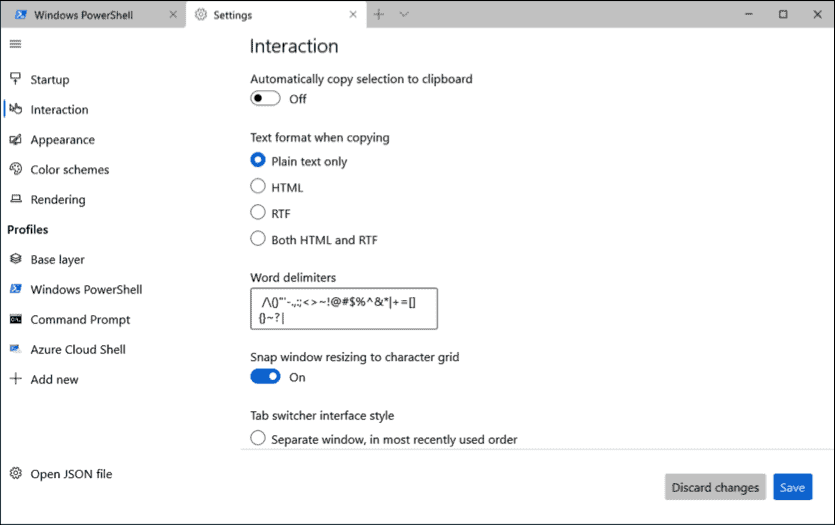 The GUI for configuring the settings covers the most important options

The GUI for the settings is currently in the alpha state and is therefore not activated by default. If you click the settings icon, the JSON file will still open in a text editor. Therefore, you must define a key combination for the GUI. To do so, Microsoft suggests inserting the following in the actions section to open the settings GUI with CTRL + Shift + comma: 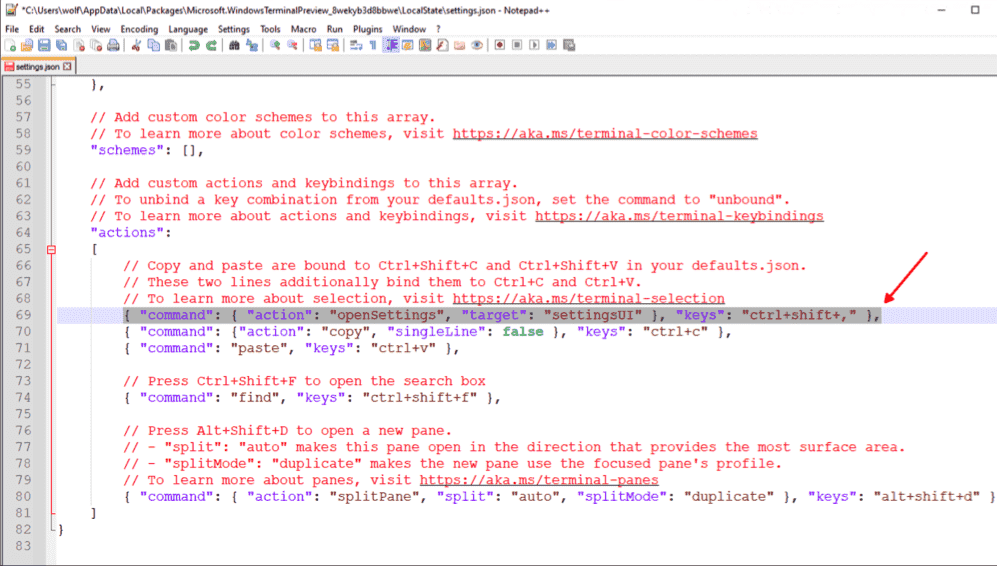 Assigning a shortcut in settings.json to the graphical interface for the settings

Currently, not all options can be configured interactively, but the most important ones are already present. They are sufficient for a basic setup of the tool. For security reasons, while the GUI is still in preview mode, it creates a backup of the JSON file after each change.

Actions when starting the terminal ^

Another new feature of v1.6 is the ability to define actions that are executed when the terminal is started. These typically include opening multiple tabs or splitting windows. This option accepts most of the parameters that can be passed to the program on the command line when it is started. Currently, you have to enter them directly in the JSON file.

In addition to these major advances, there are a number of minor changes, such as the ability to jump directly to the beginning or end of the command history or a progress indicator based on escape sequences. Also new are additional graphical effects such as animations through fractal zoom or other pixel shaders.A detailed overview of improvements and bug fixes can be found in the release notes.

Windows Terminal is designed as a store app and can therefore be obtained directly from the Microsoft Store. Alternatively, you can download the MSIX package from GitHub (the binaries can be found at the end of the release notes for each version under the collapsed Assets section). 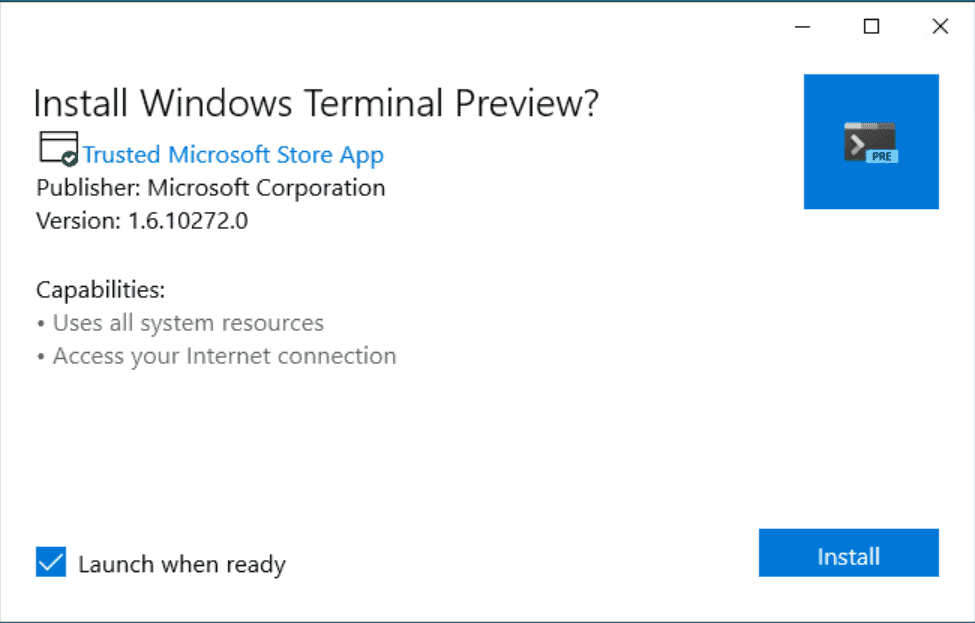 Installing the MSIX package from GitHub

It is well known that this type of application must be set up specifically for each user. You will most likely want to start a terminal for various shells with extended privileges on a regular basis. In this case, you have to install the program for this admin user as well.

For this purpose, you do not have to switch users. Instead, you can issue the following command in a PowerShell session launched for this administrative user:

Of course, this only works for the downloaded MSIX package; for installation via the store, the admin must run the app in a separate Windows session.

Although many Windows admins have been looking forward to a modern terminal with tabs, split panes, and support for virtually any shell, Windows Terminal hasn't been a huge success so far. One reason might be the awkward configuration by manually editing a very complex settings file.

Microsoft is finally closing this gap in version 1.6. Of course, you might wonder why all sorts of fancy graphic effects had a higher priority in the development roadmap. But better late than never. The new startup actions also add significant value to Windows Terminal, whereas most innovations in v1.5 are rather marginal.