Overview of the Windows Store for Business

Thus far, many IT admins perceived the new Windows apps more as an annoyance than an enhancement. Allowing end users to install apps even if they come from a monitored app store is a security, productivity, and support nightmare. With the new Windows Store for Business portal, this could change because admins get back some control over what apps are deployed in their organization. 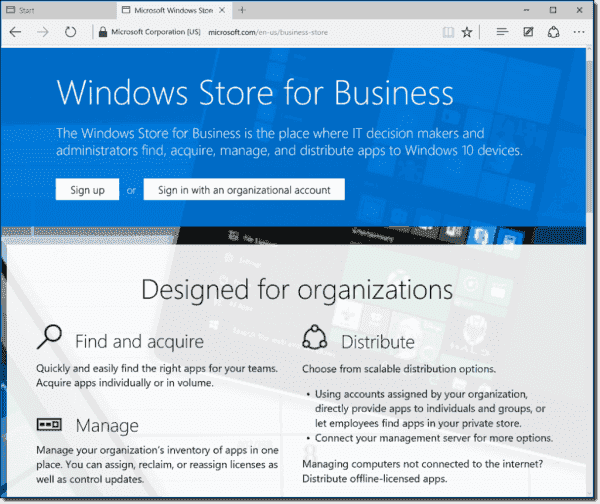 Admins can purchase apps for users individually or in volume. It will also be possible to manage offline-licensed apps through the portal, and your in-house developers can upload line-of-business (LOB) apps to a private store.

For purchased apps, users will require an Azure AD account. An Azure account is not needed for offline-licensed apps. Admins can assign apps to individuals or to all users. Updates will be automatically downloaded and installed through the Store app.

The Windows Store for Business is currently only available for Windows Insiders and it appears to me that not all announced features are available. The portal made a relatively simple impression on me.

Deploying apps to the private store

You can search for apps in the shop and then move a purchased app to the private store, assign it to individuals, or just select it for later distribution. 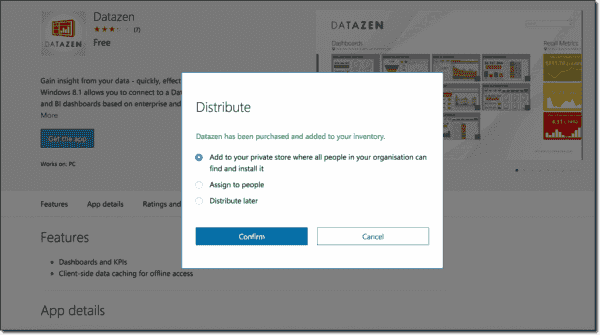 Deploying with the Windows Store for Business

The Store for Business currently doesn’t support Microsoft accounts. Thus, I had to use my Office 365 accounts for the test. When I started typing, the web app automatically narrowed down the account names. I didn’t see an option to assign apps to groups. 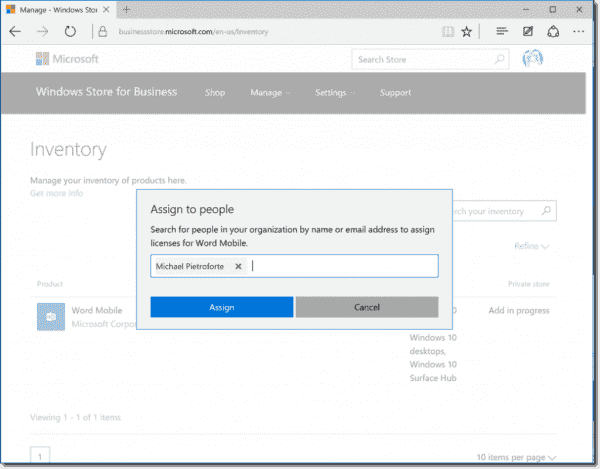 Assigning an app to people

After you assign an app, the user will receive an email with instructions on how to install the app. 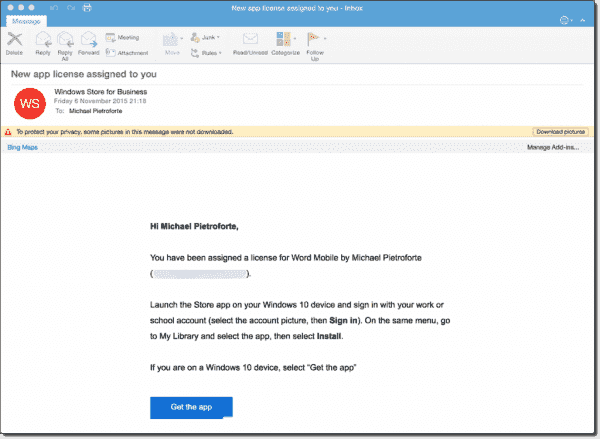 Notification email from the Windows Store for Business

The user has to click the account picture in the Store app to sign in with a work or school account (Office 365). A click on My Library in the same menu will then display the assigned app. The email also contains a direct link to the app. I suppose the My Library section in the Store app is what Microsoft calls the private store. 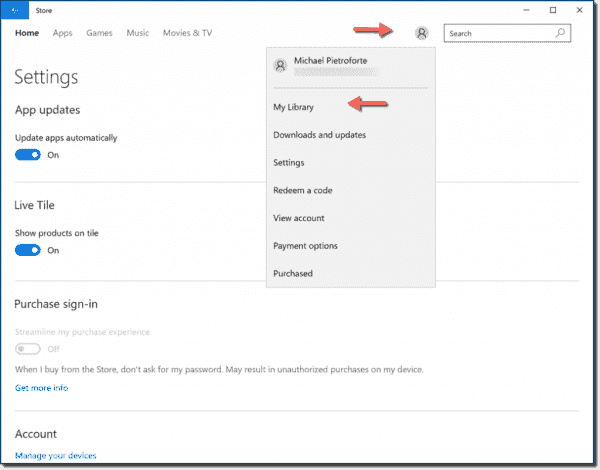 In my test, it didn’t make a difference whether the computer was a standalone machine or an Active Directory member. It seems the corresponding machine doesn’t have to belong to the Windows Insider Program.

Even though the assigned apps appeared in the private store, the download failed with the error message “Try the download again – Something happened on our end.” 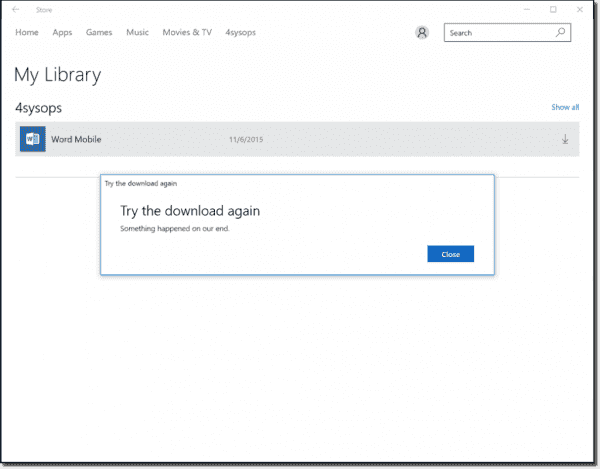 As polite as these error messages are, they are not really helpful when it comes to troubleshooting. I mean it is good to know that at least something happened at Microsoft’s end, even if it is not what I wanted. (My favorite Store error message is “The server stumbled – We all have bad days.”)

Managing apps in the Store for Business

The features of this early version of the Windows Store for Business are very limited. The settings of the Private store only allow you to change the name: 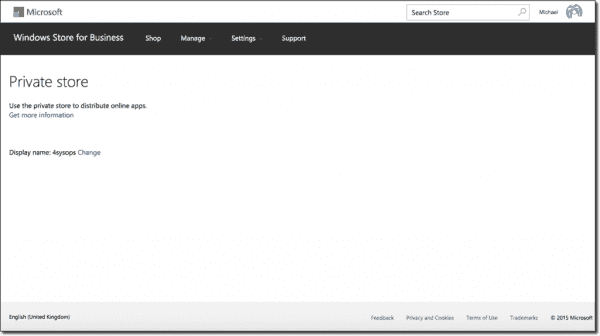 Changing the name of the Private store

Microsoft is planning to add Windows app management features to System Center and Intune. You will also be able to work with third-party management tools. On the Management tools page, you can then activate those tools. 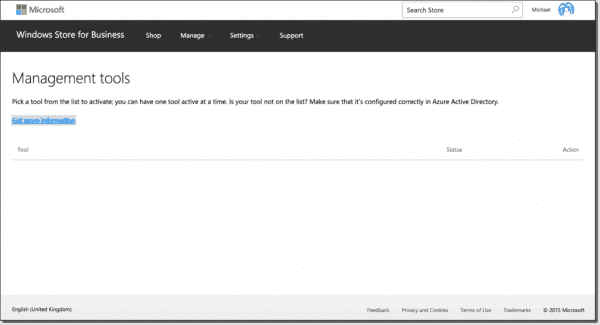 The Inventory page gives you an overview of the apps that you assigned to users.

List of the organization’s apps on the Inventory page

As mentioned above, your organization’s developers can upload line-of-business (LOB) apps to the private store. Admins can invite those developers in the Windows Store for Business. 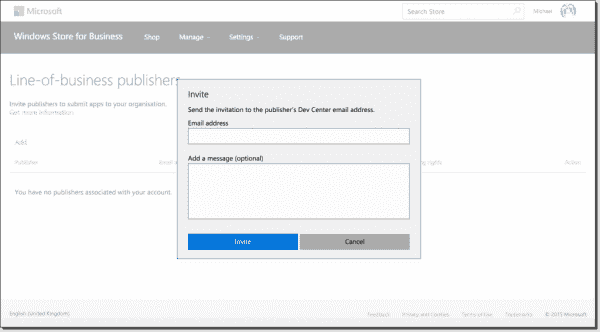 That’s pretty much what you can currently do in the Windows Store for Business. The Windows 10 Store app was very unstable during my test. I’d say that, when I clicked the Store icon on different machines, the app crashed in about 30% of the cases with no error message at all. However, I am unsure if this was related to my test of the Store for Business. This new Windows 10 feature is certainly not ready for prime time and is only something for admins who want to know what to expect in the future.

All in all, I find the idea of managing apps on Windows computers from the cloud interesting. I think if admins get back control over the apps that are running on work computers, many organizations would give up their aversion toward Windows apps.

Another problem is that users need an Azure AD account. In the long run, this means that organizations will have to give up their on-premises accounts because nobody wants to sync accounts or work with two independent accounts for each user. At the moment, Windows apps are just too simple to justify such drastic measures.

If you want to learn more about the Windows Store for Business, you can read the documents below: