Paul Schnackenburg  Wed, Jun 12 2013Wed, Jun 12 2013  windows server 2012  0
This is part three of a three part series looking at Windows Server Essentials 2012, this post will look at underlying technologies in Windows Server 2012 that will benefit SMBs as well and apps for Windows Phone and Windows 8 / RT to use and manage WSE.
Contents

The strength of WES (as in SBS before it) lies partly in the advancement of the underlying platform and Windows Server 2012 brings some interesting technologies to the table. For starters there’s Storage Spaces which is almost a return of the old drive extender from Microsoft’s Home Server. Spaces enable you to create storage pools, carve out virtual disks (with two / three way mirroring or parity) that can be thin provisioned, i.e. appear larger than the available physical storage; you can also configure hot spare drives.

Then there’s Data Deduplication which can save you from having to buy new hard drives; easy to configure and setup. The built in NIC teaming functionality in Windows Server 2012 could come in handy for WSE as well, most servers come with two NICs, this way you’ll get twice the bandwidth and redundancy to boot.

The most exciting option however might be Direct Access which is next generation, no user interaction, always on VPN connectivity for your client machines when they’re out of the office. While this technology first saw light in Windows Server 2008 it was difficult to setup and configure with extensive infrastructure requirements, putting it way out of reach for small businesses.

In Windows Server 2012 however it’s MUCH easier to configure and it can even operate behind a NAT firewall which is common in SMB. The only other requirement is that the client OS is Enterprise (Win 7 or 8) or Ultimate (Win 7); requiring volume licensing but this shouldn’t be too difficult for a small business with the right advice from their consultant. Collectively the features of Direct Access, the Remote Web Access (RWA) web based server access and traditional VPN are called Anywhere Access in WSE. 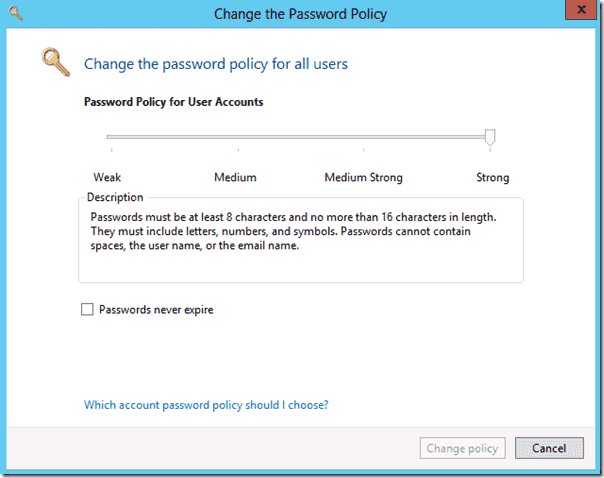 When you configure the Office 365 integration the server password policy is automatically set to “strong” but if you haven’t drunk the O365 Kool Aid yet it can be easily be altered.

Management on the go

For managing WSE from your Windows Phone there’s My Server Windows Phone App which lets you manage users, alerts and devices, along with browsing shared files. For Windows 8 / RT users there’s My Server Windows App, which also lets you manage the WSE environment as well as upload files to the server. When you open a shared file using this app it’ll automatically make it available to you offline, and syncs back the changes when you’re connected to the server again.

The best blog I’ve found that focuses on WSE is http://titlerequired.com/, it often has the answer to niggly problems with a server.

If it seems that I haven’t covered much functionality in the core product in this review it’s because there really isn’t a lot – readers of this site will already be familiar with Server Manager, AD, as well as client and server backup. WSE is simply a file and print server that integrates with cloud based solution to provide a comprehensive solution for very small businesses and it does so eminently well. For businesses that need to have more functionality on premises there are some capabilities for integration with Exchange but more of this integration will fall on IT consultants rather than Microsoft, compared to SBS.