Paul Schnackenburg  Fri, Jun 7 2013Wed, Jun 12 2013  office, windows server 2012  0
This is part two of a three part series looking at Microsoft Windows Server Essentials 2012, this post will look at the integration with Office 365 and on premises systems.

The whole point of WES is to be an in-house platform that offers file sharing and central authentication to users in a small business while other business services (email, collaboration and communication) are provided through public cloud services such as Office 365. To this end there’s a link in the console to configure this integration (more information here).

Sysadmins familiar with Office 365 in enterprise settings might wonder if WSE uses AD Federation Services to enable single sign on (SSO) for users and the answer is no. These are enterprise technologies with complex requirements (AD FS for instance requires multiple servers for redundancy), hardly in line with the simplicity desired from WSE.

In practical usage however the users will think you’ve enabled SSO because if you create a user in the WSE console and assign them a license through the Offoce 365 add-in it will sync their password to the cloud so they only have one password to remember. More information here. If you are worried about users picking bad passwords (and they will) consider using AuthAnvil for Office 365 or a similar service for two factor authentication. 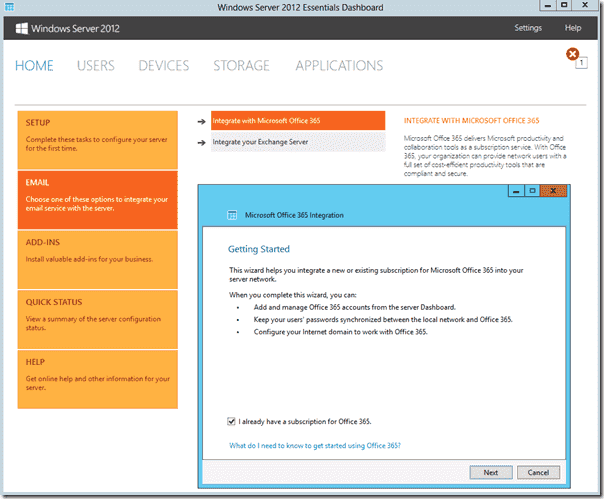 Setting up “the other half” of the WSE experience is linking an Office 365 account to the server, this is easy to do with a simple three step wizard.

For backup to the cloud Microsoft just recently released an integration module for Windows Azure Backup, be aware that while cloud is an excellent long term archiving solution, don’t rely on this for your primary Disaster Recovery (DR). Depending on the size of the storage on your server and your internet connectivity, having to wait for days for your restore to complete probably isn’t the best experience.

Integration with on Premises ^

For businesses that don’t want to go down the track of the public cloud just yet there’s the option to integrate WSE with a separate on premises Exchange server. I can see many small businesses being served well by a relatively beefy server running Hyper-V server (free) with two VMs, one running WSE, the other Exchange. There’s a link in the dashboard to configure this integration, be aware that even though Exchange 2013 is in the market there are some caveats around its usage on production, a safer bet might be the mature Exchange 2010.

This is an example of where Microsoft’s thinking again mirrors where the world is heading, SBS was an “all in one” server which made sense in 2003, provide all the services a small business might need on one server because most SMB can only justify the cost of one physical server. But the wisdom of running AD, Exchange, SharePoint, SQL and even ISA server on one box wasn’t quite as clear. Fast forward to 2013 and the answer lies in one physical server, virtualization and separate VMs for separate functionality.

The WSE console can be extended with additional functionality by third party ISVs, currently the link in the dashboard shows eight products on Microsoft Pinpoint that are compatible with WSE. 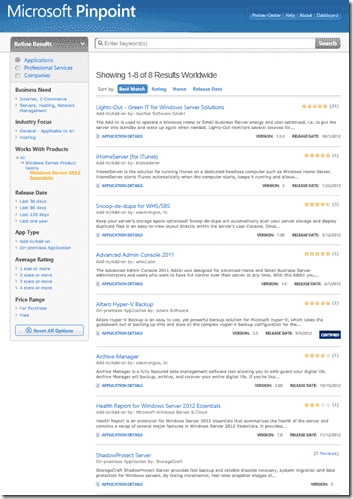 Tag: There are some useful Add-Ins already available for WSE and one would hope that more will come.

Part 3 in this series will look at advancements in Windows Server 2012 itself and how these can be applied in WSE as well as mobile management options.