Timothy Warner  Fri, Mar 23 2012Mon, Jun 18 2012  windows server 2012, windows 8  4
In this article you will quickly learn how Windows Server 8 Beta installation differs from that of earlier versions of Windows Server.

Who among the 4sysops readership remembers the Windows NT Server 4.0 installation process? Ah, the good old days. You’ll recall that we began the installation three 1.44-inch floppy startup disks. After bootup we then spent indeterminate time intervals installing undetected device drivers. Finally, with our fingers crossed and with a lot f luck, we might actually proceed to the actual OS installation. 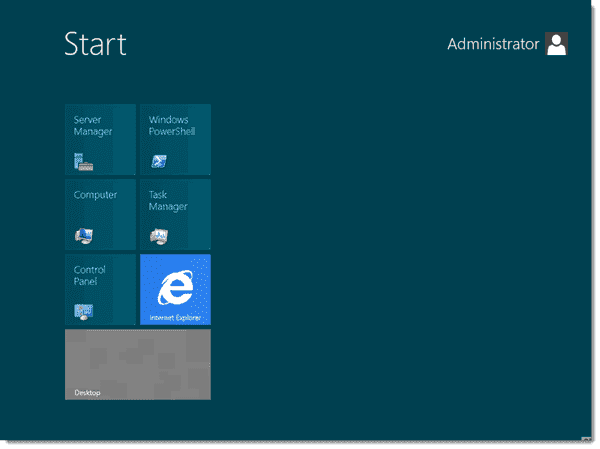 It wasn’t until Microsoft released Windows Server 2008 that we received full support for the mouse, enhanced video, and the network interface card all the way through installation; this was thanks to the nifty Windows Preinstallation Environment (PE).

This bit of negative historical background sets the stage for today’s subject. In my opinion, Microsoft has done some amazing work in streamlining the installation of their server operating system over successive product versions. If you haven’t yet downloaded the Windows Server 2012 Beta ISO image yet, then please do yourselves a favor and nab it while it is still available.

Let’s mount the Windows Server 2012 DVD in a physical or virtual computer and get to work! 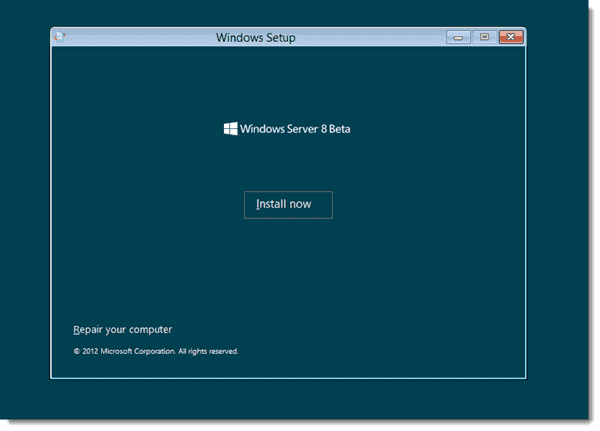 As you see in the screenshot below, we can click Troubleshoot to “refresh or reset your PC, or use advanced tools.” Let’s click that button to see where the option takes us. 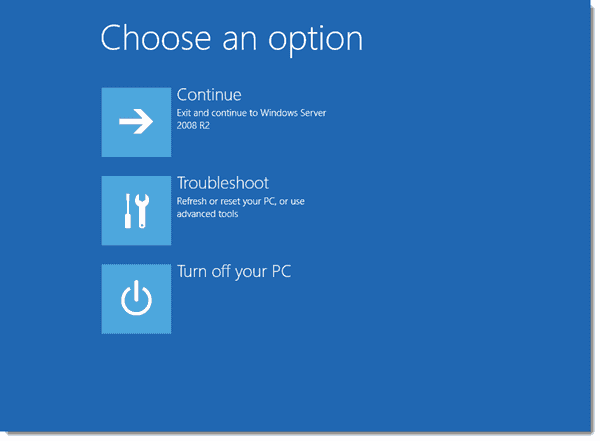 The Advanced options screen gives us access to an elevated command prompt, which is nothing surprising. We also see the System Image Recovery option that exists in Windows Server 2008 R2 and Windows 7. With only a few mouse clicks, you can load a previously created operating system image from a local or remote location and restore the server as it existed on the system image creation date. 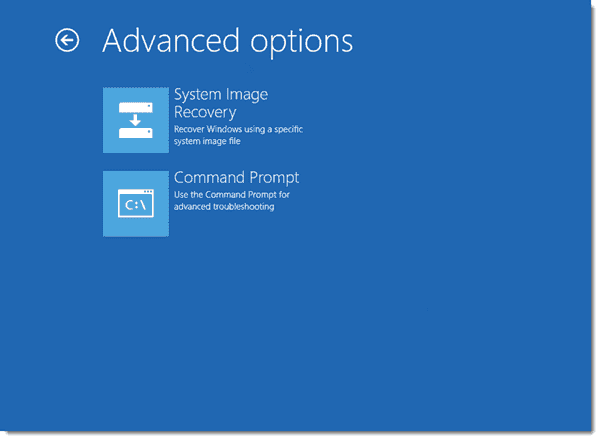 While the recovery tools as such really haven’t changed over the past couple of editions of Windows Server, the way in which we access them certainly has evolved.

Where is Features on Demand? ^

If you experimented with the Windows Server 2012Developer Preview that Microsoft released in late 2011, you probably noticed an installation option called “Features on Demand.”

The idea behind Features on Demand is that if a server role or feature is not in use on that server, then the installation binaries themselves should not exist on the local file system at all. This is the IT security principle of least service.

With Features on Demand, we not only reduce the attack surface of the server, but we also decrease the disk space usage footprint of the operating system itself.

However, you might be shocked to observe, as I was, that the Features on Demand installation option is not included in the Windows Server 2012 Beta release. As you can see in the following screen capture, we have just two options: 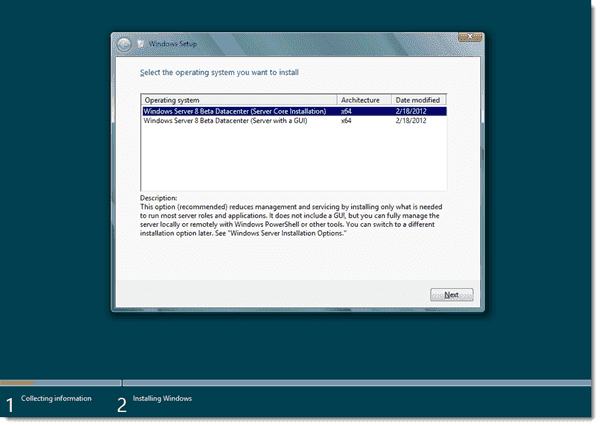 Quite honestly, I am completely baffled as to where the Features on Demand installation option went. Perhaps it will reappear in a future release. Perhaps its functionality will be integrated into the two existing installation options (both of which we are familiar with from Windows Server 2008 R2).

Regardless, the coolest Windows Server 2012 Beta feature that I’ve seen is the ability to dynamically switch between the Server Core and Server with a GUI installation modes; we will learn how to do that later in this blog post.

If you have played around with the Windows 8 Consumer Preview, then you know how strongly Microsoft feels about your logging into Windows with a so-called “Microsoft Account.”

The cool thing about Microsoft accounts is that they provide a Windows 8 user with transparent access to Microsoft online services, most notably their SkyDrive cloud storage service.

However, we domain administrators need full control over our security principals. Thus, we are relieved to find no trace of Microsoft Accounts in the Windows Server 2012 Beta logon process. We instead use the familiar, garden variety local Administrator account. 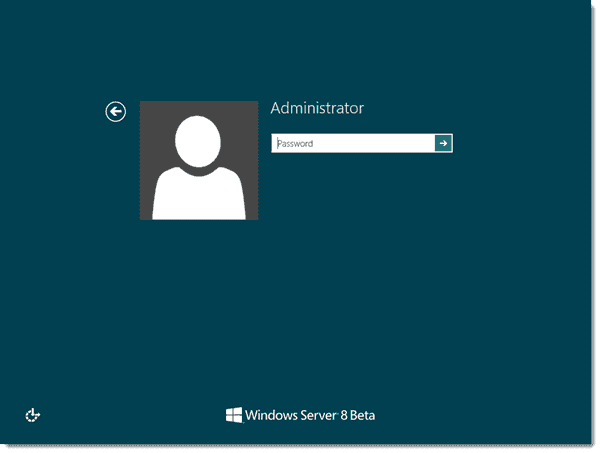 Upon successful logon, you are presented not with the flashy, touch-centric Metro user interface, but instead with what looks at first like a traditional Windows 7 desktop. 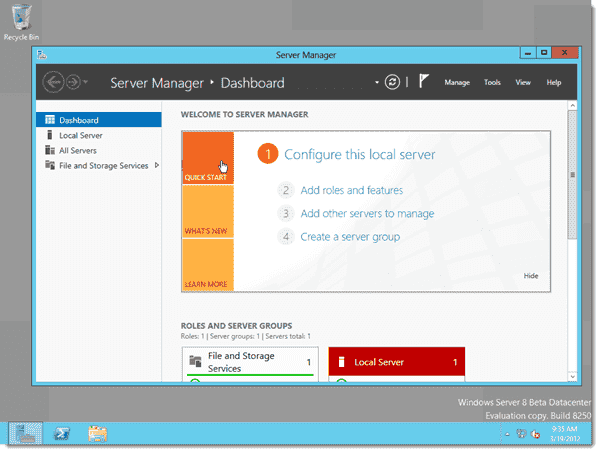 Don’t be fooled—there are much more intense changes to the “traditional” Desktop interface than meet the eye. One significant difference between the Windows Server 2012 Beta and Windows Server 2008 R2 desktops is the absence of a Start menu system. Instead, the button in the lower-left location of the Taskbar is simply a shortcut that launches the Server Manager console.

We can (and will) cover the ins-and-outs of the new Server Manager in a future 4Sysops blog post.

At this point you might also have thought to yourself, “Cool! There is no Metro interface in Windows Server 2012 Beta!” Not so fast—if you move your mouse to the lower-right corner of the Desktop, expose the Charm bar, and select Start, then you find yourself magically transported to the “you either love it or you hate it” Metro UI. 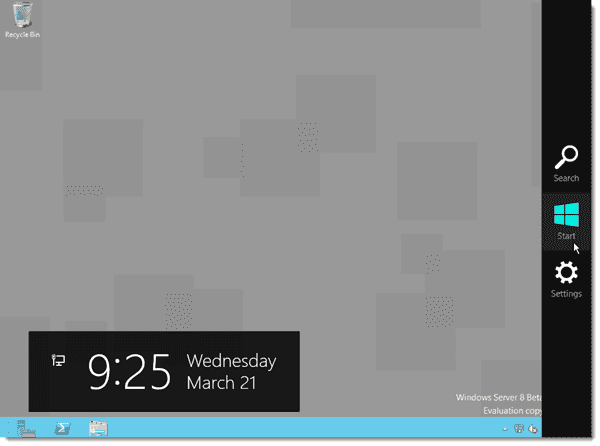 I must admit that I remain confused at Microsoft’s inclusion of the Metro UI in its Windows Server product. However, I must concede the possibility that perhaps one day in the near future we will manage all of our Windows servers from a tablet device. In that case, having a touch-centric UI would be eminently intuitive.

As I stated earlier, I believe that hot user interface switching is the coolest new feature in Windows Server 2012Beta. Here is a typical use case: You need to install a Windows Server 2012 box with the Server Core configuration to enhance the system’s security and to comply with IT department policy.

However, you aren’t yet up to speed on PowerShell and instead want to configure the server by using graphical tools. One option (with remote access obviously being another one) is to use the trusty Deployment Image Servicing and Management (Dism) tool to make a temporary switch.

For instance, to switch from a Server with a GUI (full) installation to Server Core, issue the following command from an elevated command prompt:

Conversely, to switch from Server Core to the Server with a GUI installation, issue the following command from an elevated command prompt:

The installation option switching process may take several minutes, after which you will need to reboot:

Today we performed a quick overview of the Windows Server 2012 Beta installation process. Were you impressed with the speed and intuitive nature of the installation? Yes, it is true that we Windows systems administrators have a learning curve ahead of us, not only in terms of navigating Windows Server 2012 UI, but also with respect to managing fleets of Windows 8 desktop systems. However, we became IT professionals in the first place because we love learning, growth, and change, correct?