Vladan Seget  Thu, May 18 2017Thu, May 18 2017  virtualization, vmware  14
In this post, I'll show you two ways to configure a Windows 2016 virtual machine (VM) with the VMware Paravirtual SCSI (PVSCSI) adapter. This controller offers a lower CPU cost for an I/O operation compared to that of the LSI Logic SAS virtual SCSI controller, which is the default when deploying a new VM based on Windows Server 2016.

VMware's preconfigured VM templates don't always use the storage controllers that have the best performance. The reason is that Windows 2016 does not come with the corresponding drivers. The result is that it is impossible to install a new VM running Windows Server 2016 out of the box.

There are two ways you might want to proceed depending on whether you have already deployed some Windows 2016 VMs or you're building a new VM from scratch.

I assume you have a traditional VM with a single virtual disk configured. You'll need to proceed outside of business hours, as the steps require rebooting the VM several times.

First, add a new storage controller to your VM and change the type to VMware Paravirtual. 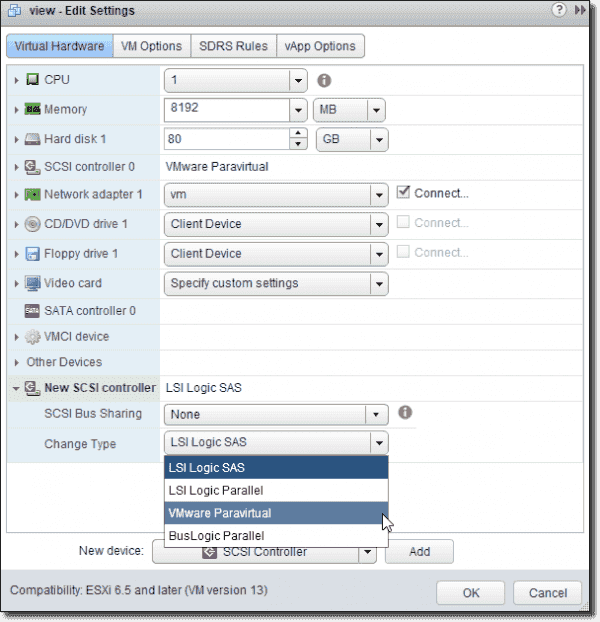 Then add a small 2 GB hard disk and attach it to SCSI controller 1 (make sure to select SCSI 1:0 as the connection). This disk is not a system disk, so the VM will boot normally, and the Windows operating system will automatically find the drivers it can use to install this VMware Paravirtual controller. 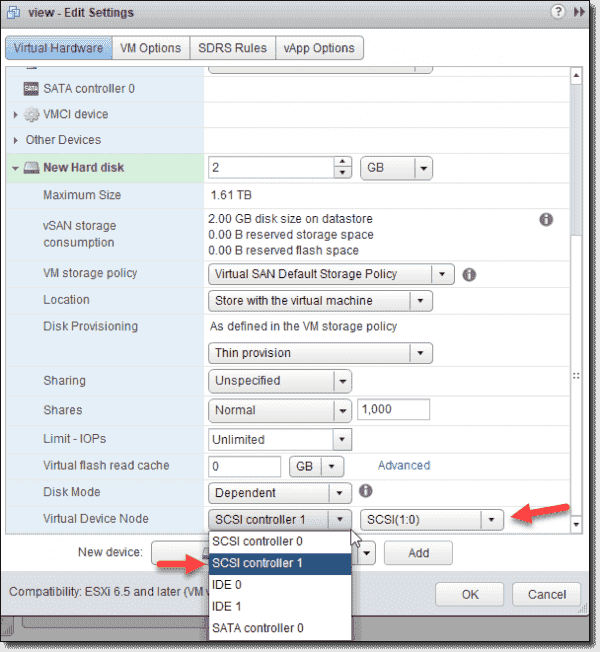 After the OS finds drivers for the disk, make sure the disk appears in the Disk Management console, so you can initialize, format the disk, and bring it online.

Once done, gracefully shut down the VM and change the first SCSI controller 0 to VMware Paravirtual, and then click the Change type button. 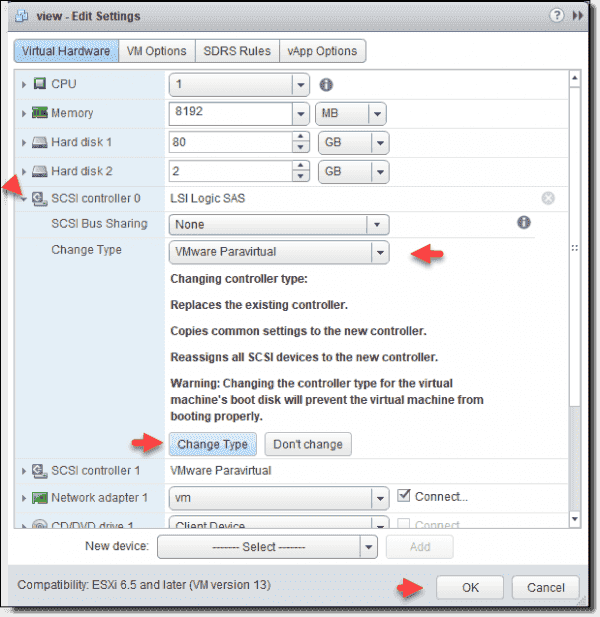 Change the type for SCSI controller 0 to VMware Paravirtual

You can boot the VM, as the OS is now aware that some of its controllers are using VMware Paravirtual, thus it can boot successfully. The OS already installed the drivers with the previous step.

As mentioned before, this was for the case in which you have already some VMs (including Windows Server 2008 R2 or Server 2012 R2 VMs) up and running, and you just want to change the controller type for those VMs.

If you create a new VM, you can do it as described below.

Case 2: Prepare a new VM with VMware Paravirtual for a boot disk ^

You can download the latest VMware tools from VMware, or you can use the one bundled with your ESXi installation within the Locker directory. The corresponding ISO image files are located at /locker/packages/.

You can get the latest ISO (Windows.iso) from VMware's website.

During the installation process when the Windows Server installer asks you where you want to install (and you don't see any volumes), just click the Load driver link. 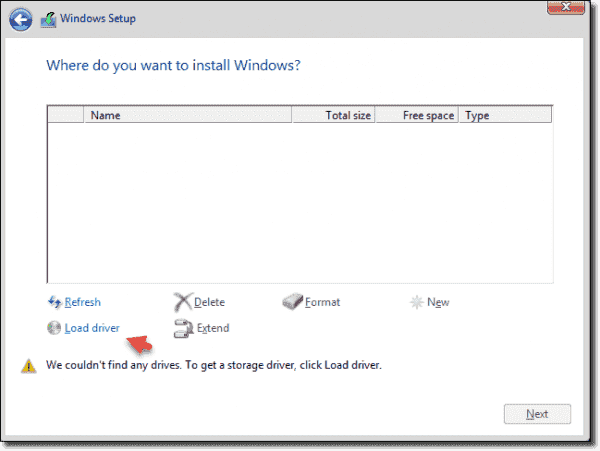 Make sure you previously mounted the "Windows.iso" you downloaded from VMware, as a second CD/DVD to your VM.

Then browse the ISO and locate the driver. 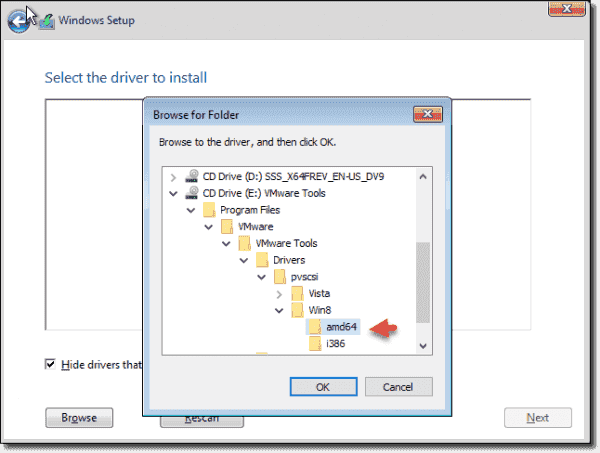 The driver path will display within the setup window. Click Next to load the driver. 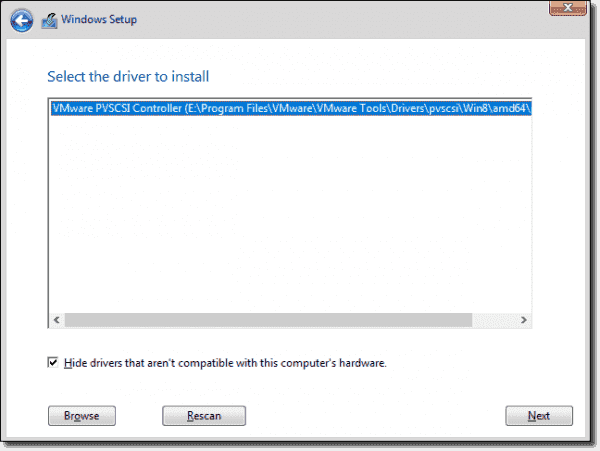 The driver displays in the window

After that, a new unallocated space shows up. 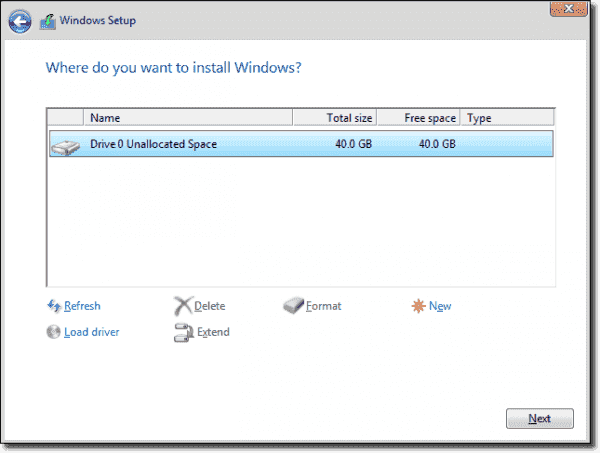 I described two ways to set up a Windows Server 2016 VM with a VMware Paravirtual SCSI. The two main benefits are the increased throughput and lower CPU usage.

Leave a reply to Quynh Click here to cancel the reply