Sander Berkouwer  Wed, Jan 23 2013Tue, Feb 5 2013  server core, windows server 2012  0
In this part of my Server Core series, I will show you how to in-place upgrade these Server Core installations to Windows Server 2012.
Contents

When you want to in-place upgrade a Windows Server 2008 R2-based Server Core installation to Windows Server 2012, you will need 15GB of free space and at least Service Pack 1 installed. These are the only requirements besides the above cross-SKU and cross-language upgrade limitations.

However, an issue exists at the time of this writing that prevents you from upgrading Server Core installations with either the Active Directory Domain Services Role or the DNS Server Role installed. The upgrade will hang on a solid black screen late in the upgrade process. 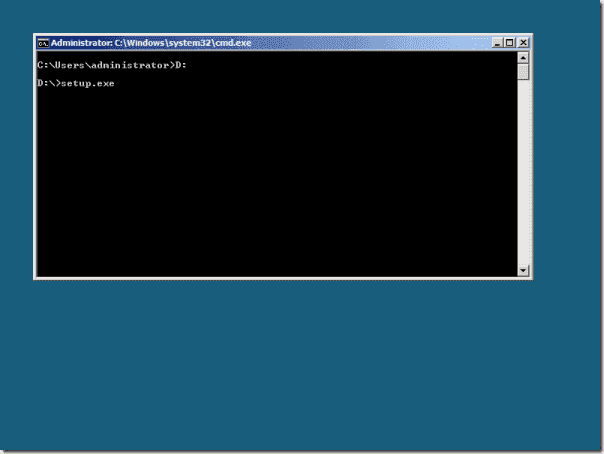 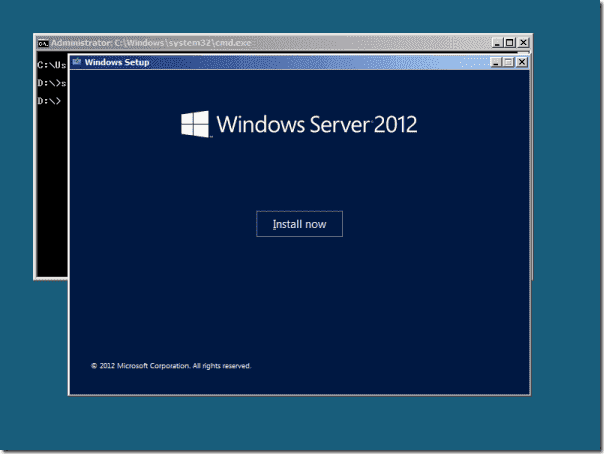 The screen will turn blue while displaying the text Setup is copying temporary files and next Setup is starting. After a short moment, you will be presented with the Graphical Windows Setup program, which looks awfully similar to the Windows Setup for clean installations of Windows Server 2012: 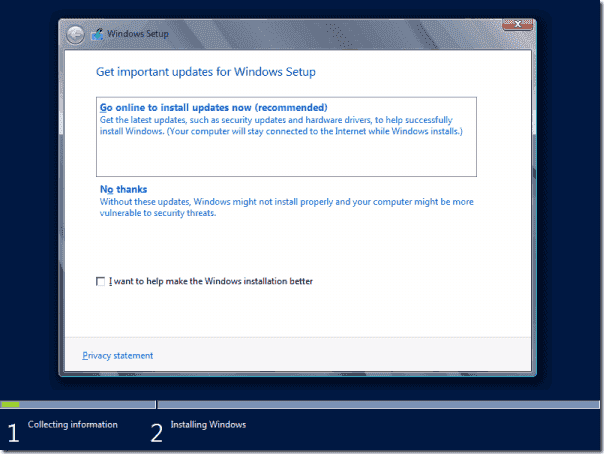 On the Get important updates for Windows Setup screen, choose to Go online to install updates now (recommended). When your Server Core installation has Internet access, this option will make sure the Windows upgrade process will be as smooth as possible.

Optionally, you can check the I want to help make the Windows installation better option. When you do, Windows Setup will gather non-identifiable information from the program and send it to Microsoft. 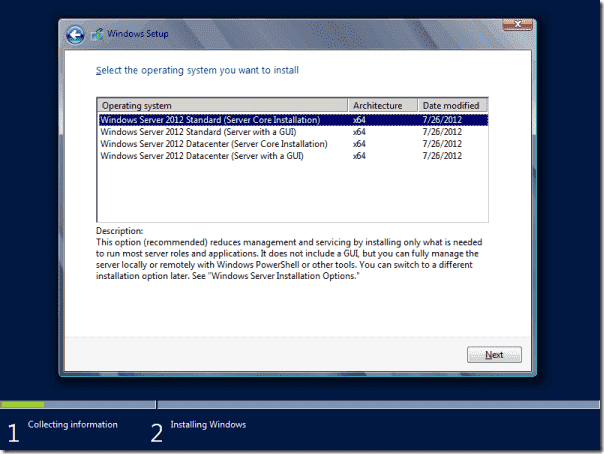 Select the operating system you want to install

Choose the operating system to upgrade to and click Next. 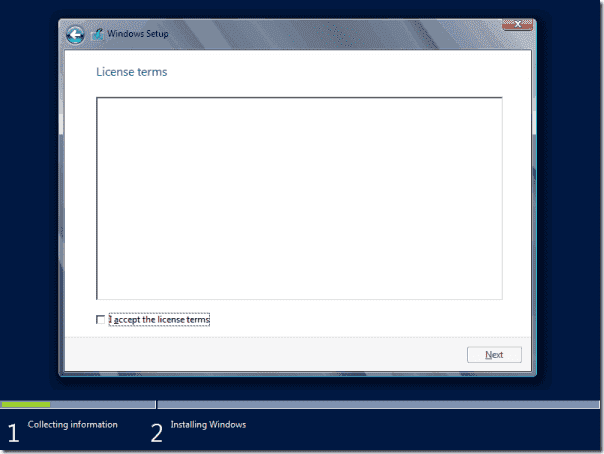 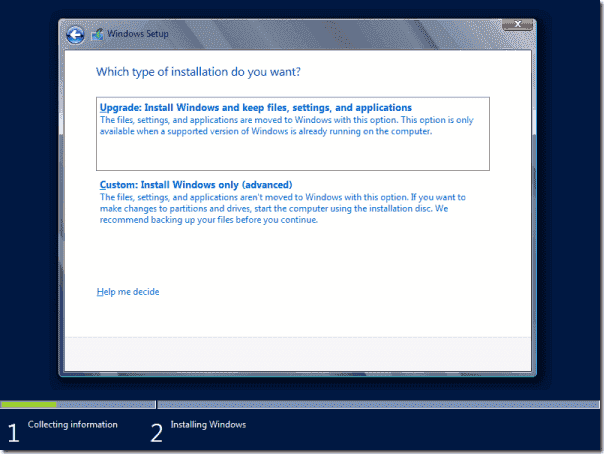 Which type of installation do you want

On the Which type of installation do you want? screen, select Upgrade: Install Windows and keep files, settings and applications. 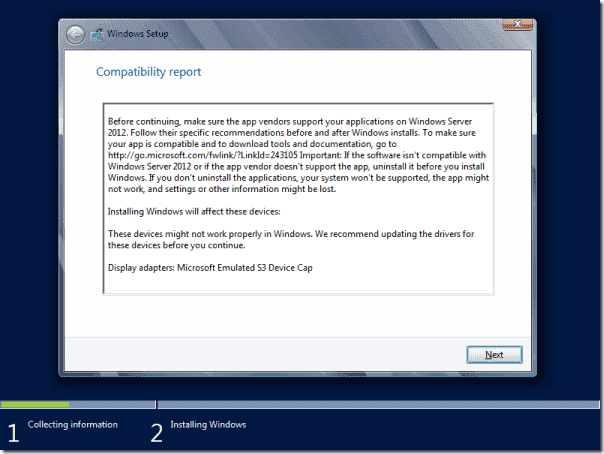 You will be presented with the Compatibility Report. This report will list the applications and drivers that are incompatible with Windows Server 2012. If you suspect serious problems with the unavailability of the applications and devices listed, do not proceed. Click the X in the left top corner of Windows Setup and correct the problems first. When you’re good to go, click Next to begin the actual upgrade. 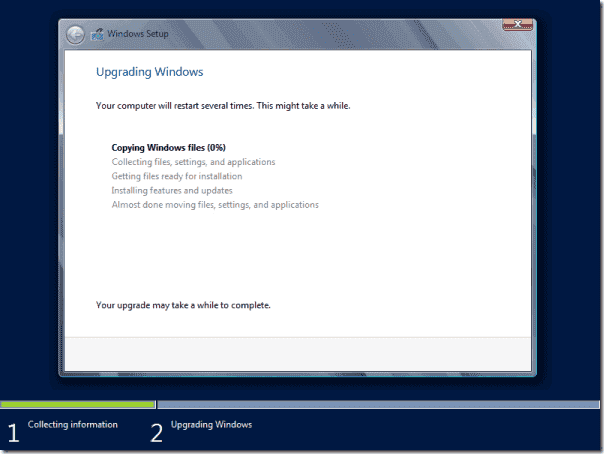 After the upgrade, you will be presented with the Windows Server 2012 Lock Screen: 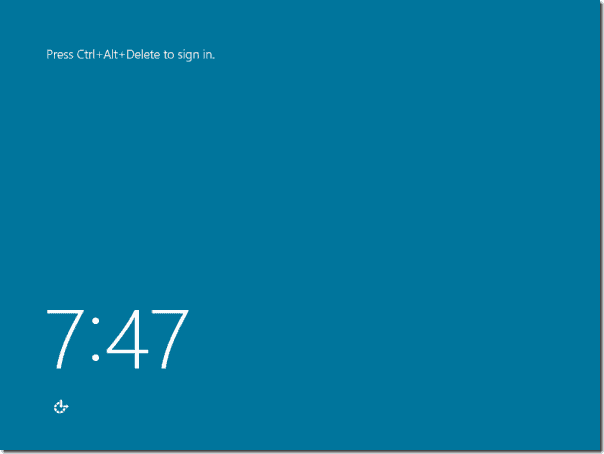 Press the infamous Ctrl+Alt+Del keyboard combination to sign in. 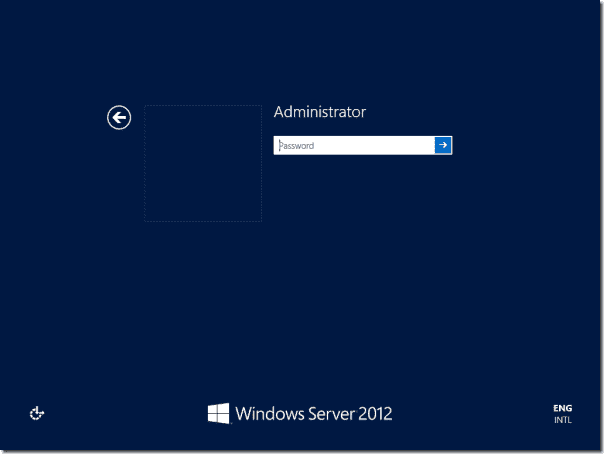 Type your password and either press Enter or click the blue arrow to the right of the password input field. You will now be greeted by the command prompt on your upgraded Server Core installation: 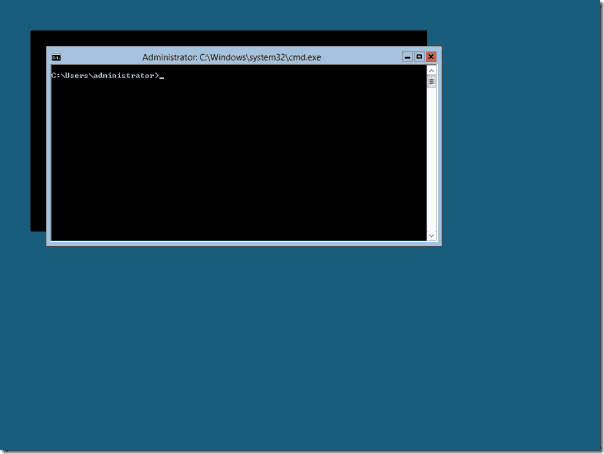 The black square behind the command prompt at your first login is not a display glitch. The desktop background color is already set to black, but it will not show until you log on a second time.

Now, review the contents of the Error log kept by Windows Setup, by typing

When done, close Notepad. Next, check the availability of your Server Roles and Features, as well as any additional functionality the Server Core installation offered before the upgrade.

In my next post I will discuss Server Core's built-in management tools.