Paul Schnackenburg  Thu, Jun 6 2013Fri, Jun 7 2013  windows server 2012  0
This three part series will look at Windows Server 2012 Essentials and how it fits as a modern SMB IT solution, part one will cover installation and transmogrification.

When Microsoft announced the end of the line for the Small Business Server (SBS) product on in the middle of 2012 there was a lot of unrest in the small business IT consultant community around the world. SBS 2000 and particularly 2003 were surprisingly popular products and a whole generation of SMB IT providers (like myself) built their businesses around these products and when Microsoft followed up with SBS 2008 and 2011, both stable and capable platforms the future seemed certain.

But this is IT and nothing is ever certain, nor does it stay the same. The world has moved on and according to Microsoft; the future of IT for small businesses is in the cloud. And I tend to agree, most SMBs aren’t in the business of running servers, they’re lawyers, bakers or plumbers and they will be well served by paying a monthly fee for their IT services which will be run by large, specialist hosting companies. The timing however is a bit off, here in Australia (as in many other countries outside of the US); most of my small business clients aren’t in a position to really take advantage of the cloud because of poor and costly internet infrastructure.

Now, nine months later, with SBS 2011 still available in OEM form until the end of the year (and in volume licensing form until 30th of June) let’s take a look at the only on-premises path to the future available from Microsoft – Windows Server 2012 Essentials.

Windows Server 2012 Essentials (WSE) builds on the Essentials 2011 product from the 2008 R2 server era while replacing the underlying platform with Windows Server 2012. It has built in Active Directory, server and client backup, an easy to use dashboard as well as built in web based remote access (RWA). No Client Access Licenses (CALs) are needed for accessing the server and it tops out at 25 users and 50 devices. 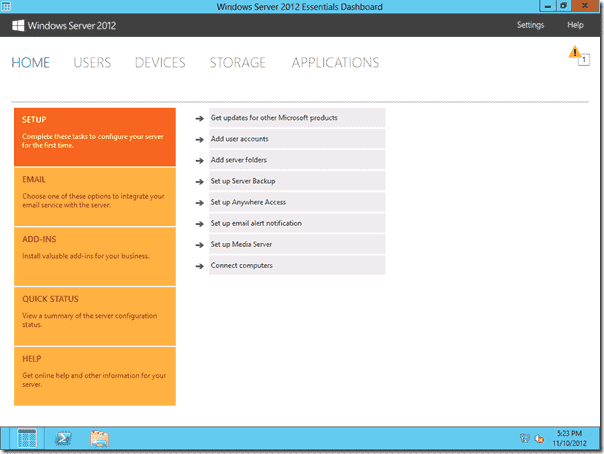 The dashboard is simple to work with and will cover 95% of the day to day tasks of maintaining a WSE server.

Installation of WSE is very similar to setting up a standard Windows Server 2012 although there are a few more questions about company information and setting up a new account for administration (the built in Adminstrator account is disabled). This information is used to provision AD in an automated way without requiring a non-technical user to deal with the challenges of DCPromo. 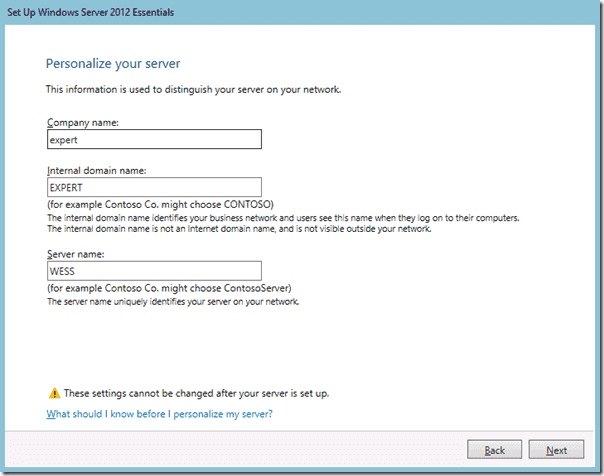 Installing WSE is simple and very similar to a vanilla Server 2012 installation.

For business that grows past 25 users it’s possible to transmog the server, in essence turning it into a standard Windows Server 2012. For consultants that have gone through the complex steps in previous versions to “upgrade” an Essentials or SBS box this process is now much simpler. The main issue here is that when you’ve upgraded the WSE server to a full version; CALs are needed to access the server for ALL users. So the 26th user starting in a business is really going to cost license wise. The WSE console and other benefits on top of Standard server will continue to function and are supported up to 75 users.