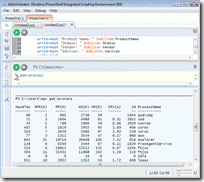 PowerShell ISE (Integrated Scripting Environment), formerly known as Graphical PowerShell, is a graphical development environment and Command Prompt alternative. It is part of PowerShell 2.0, which has been integrated into Windows 7 and Windows Server 2008 R2, and is available as a Community Technology Preview (CTP) for Windows XP and Windows Vista.

I believe PowerShell’s integration into Windows will bring its breakthrough. As far as I’m concerned, the "DOS Command Prompt" is finally dead. Even if you haven’t found the time to learn PowerShell yet, it makes sense to use PowerShell ISE whenever you need a command line, because a graphical user interface is much more convenient. 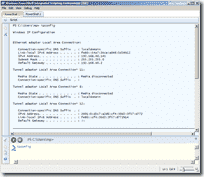 The main advantage of PowerShell ISE is that you can work within two panes: one for typing commands and one where the output results are displayed. There is a third pane for editing scripts, but you can disable it, so as to have more space for the output pane.

My only complaint is that the command pane isn't able to display a list of previously entered commands. You can navigate through commands with the cursor keys, as with the Command Prompt, but this is a very inconvenient way of accessing old commands, particularly if you have to accomplish complicated tasks that require many steps. If there was a complete list of all entered commands, you could just select the appropriate line without having to press the cursor key numerous times.

A good feature is the ability to resize PowerShell ISE's, window using the mouse. I have never understood why the default width of the Command Prompt is only 80 characters, or why you can only resize it by accessing the window’s properties menu. Moreover, the Command Prompt's copy and paste function is quite cumbersome. If a command or output overruns a line, it is impossible to highlight the whole line. Another nice feature of PowerShell ISE is that you can work with multiple shell tabs, which is more convenient than opening multiple Command Prompt windows. 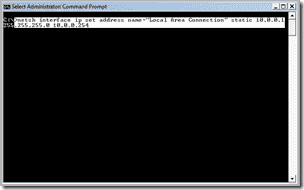 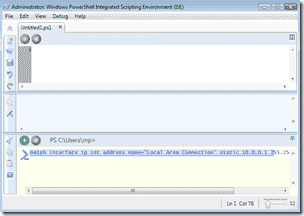 Of course, the main function of PowerShell ISE is that you can use it for PowerShell commands. Moreover, it is much more convenient to write scripts in PowerShell ISE than it is in Notepad, because of features such as syntax highlighting, script tabs, and basic debugging capabilities.

However, if you often write PowerShell programs you probably will prefer the free PowerGUI tool, mostly because of its PowerPacks, which simplify the creation of PowerShell scripts for all kinds of products within the Windows ecosystem. Considering that PowerShell ISE can also be extended by third parties, I assume that there will be some interesting competition between the two in the future. This will also mean commercial products like Idera PowerShell Plus might find it hard to keep up.