Anil Erduran  Mon, Dec 5 2016Wed, Jan 3 2018  containers, docker, networking  7
In Part 1, we had a look at general networking details of Windows Container technology, and I explained how to configure NAT in Docker. In this part, we are going to talk about custom networks such as transparent networks, Layer 2 (L2) bridging, and L2 tunnelling in Docker for Windows.

You may remember from the first part that we can easily change the IP prefix of the default NAT network by playing with the daemon.json Docker configuration file. The Docker engine also gives us a chance to create fully custom networks (for NAT and other types of drivers) using the command line.

However, in order to create user-defined networks, we need to configure the daemon.json file again to disable the default NAT network creation. As a first step, the Docker service should be stopped and existing networks should be deleted.

Now you are ready to modify the Docker configuration file. Under the C:\ProgramData\Docker\config\ directory, open the daemon.json file or create it manually if you don't have it.

Once you start the Docker service again and check available networks, you will see that no network has been created for the container service.

Now you are ready to create user-defined networks using the Docker CLI.

The "docker network create" command can be used to create user-defined networks. The "d" flag stands for DRIVER and specifies the network type you want to create. You can also provide the IP prefix and gateway address using -subnet and -gateway flags.

In the above picture, the "inspect" command also shows that this newly created network is not associated with any containers. In order to attach this network to a container you can use the --network flag along with the "docker run" command.

In the example below, I'm running my microsoft/windowsservercore image with the --network flag to attach it to the custom NAT network that I created earlier.

Let's check the IP configuration inside the containers: 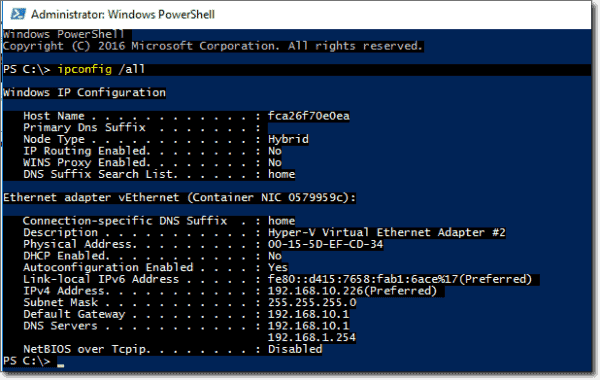 This new container picked an IP address from the IP range we specified in CustomNatNetwork.

This command is only applicable for new containers. In order to modify network settings for an existing container, we need to stop the container and then use the "network connect/disconnect" command.

Then you can use the connect parameter to attach a custom network to your container:

Now you can start the container and inspect its details: 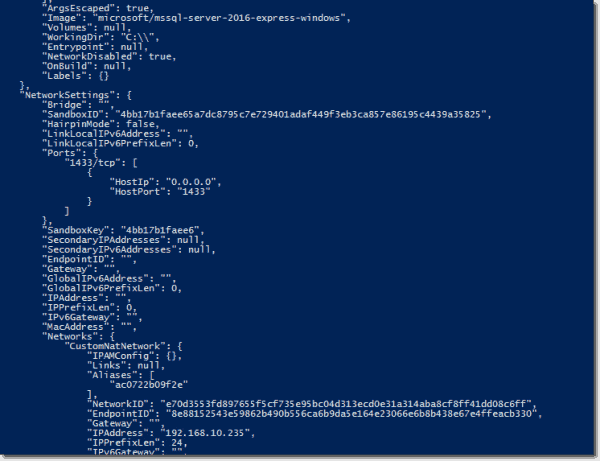 As you can see, my container picked up CustomNatNetwork as the default network and also chose an IP address from the range.

There are basically four different networking types for Windows Container hosts: NAT, transparent networking, L2 bridging/tunneling, and multiple networks. These network drivers provide internal and external access to containers for different use cases. Let me go through each of these and discuss the details.

As we previously discussed, this is the default networking option in Windows/Hyper-V containers. Each container will pick an IP address either from the default NAT prefix or from the custom NAT prefix you specified.

Port forwarding is also available with this network driver type, so you can easily do port forwarding from host to container to access application/process from an external network.

The NAT network provides both internal–internal and internal–external communication through WinNAT and can also be used for single-node or multi-node container deployments.

You also need to be careful while using the NAT network for Windows containers in production as there are some key limitations in the WinNAT implementation as of today. Here are the some known issues in container scenarios:

This is another type of network driver in Windows container environments, which allows you to connect your containers directly to the physical network. In that case, containers will pick up an IP address from an external DHCP server, or you can assign IP addresses 'statically'.

You can follow the same procedure to create a custom network with a transport driver just by specifying the network driver type with the "-d" flag:

You can also provide subnet and gateway flags along with the same command if you are planning to use static IP addresses for your containers. Subnet and gateway values should be the same as the physical network details on the host.

You can retrieve the details of the new Transparent vNIC with Get-NetAdapter command:

As we discussed, there are two options to assign IP addresses to containers. The first option is to use your existing external DHCP server; however, if you are using a virtualized container host, you will need to enable MACAddressSpoofing as the Hyper-V host will normally block network traffic when there are multiple MAC Addresses.

The second option is to assign static IP addresses to containers using the "--ip" flag.

These network drivers can be used for private and public cloud deployments, and they are a great fit for Software Defined Networking (SDN) deployments.

L2 bridge mode also allows containers to leverage overlay networks such as VxLan in order to communicate across multi-host deployments. In order to deploy an L2 Bridge or L2 tunnel for SDN deployments you have to have at least:

The following command can be used to create a custom L2 Bridge network on the container host:

If you want to create multiple networks for Transparent, L2 Bridge, or L2 Tunnel, you need to configure each network driver to use its own network adapter to connect to an external vSwitch. Binding a network to a specific interface can be done using the " –o" flag along with the "docker network create" command.

In this two part series, we discussed what types of network options we have today for Windows containers in production.

The NAT network is the default option and covers most of the requirements you might have for dev/test environments. The Transparent driver is another way to connect containers directly to a physical network.

For Software Defined Networking deployments – for instance AzureStack – the best way to provide network across hosts and tenants is to create L2 Tunnel or L2 Bridge networks.