Wolfgang Sommergut  Thu, Nov 11 2021Thu, Nov 11 2021  deployment, remote management  1
At the Ignite conference, Microsoft presented the next GA release of the Windows Admin Center (WAC). It now supports all current versions of Windows, as well as Azure Stack HCI 21H2. New features include a multi-resource dashboard, the option to create VHDX, and an automatic logout.
Contents

After version 2103, 2110 is the second official release for the Windows Admin Center this year. In the meantime, updates have been released for all Microsoft operating systems, namely Windows 11, Windows Server 2022, and Azure Stack HCI 21H2. A major topic of WAC 2110 was the updating of platform support.

Azure Stack HCI benefits the most

The extended platform support is usually not limited to pure compatibility, but above all, the web tools should manage the new features of the operating systems. With Windows Server 2022, however, the innovations were limited; hence, little can be reflected here in the WAC.

The configuration of secured-core PCs was already possible, and the same applies to SMB Compression and SMB over QUIC, which is reserved for the Azure Edition of Server 2022. 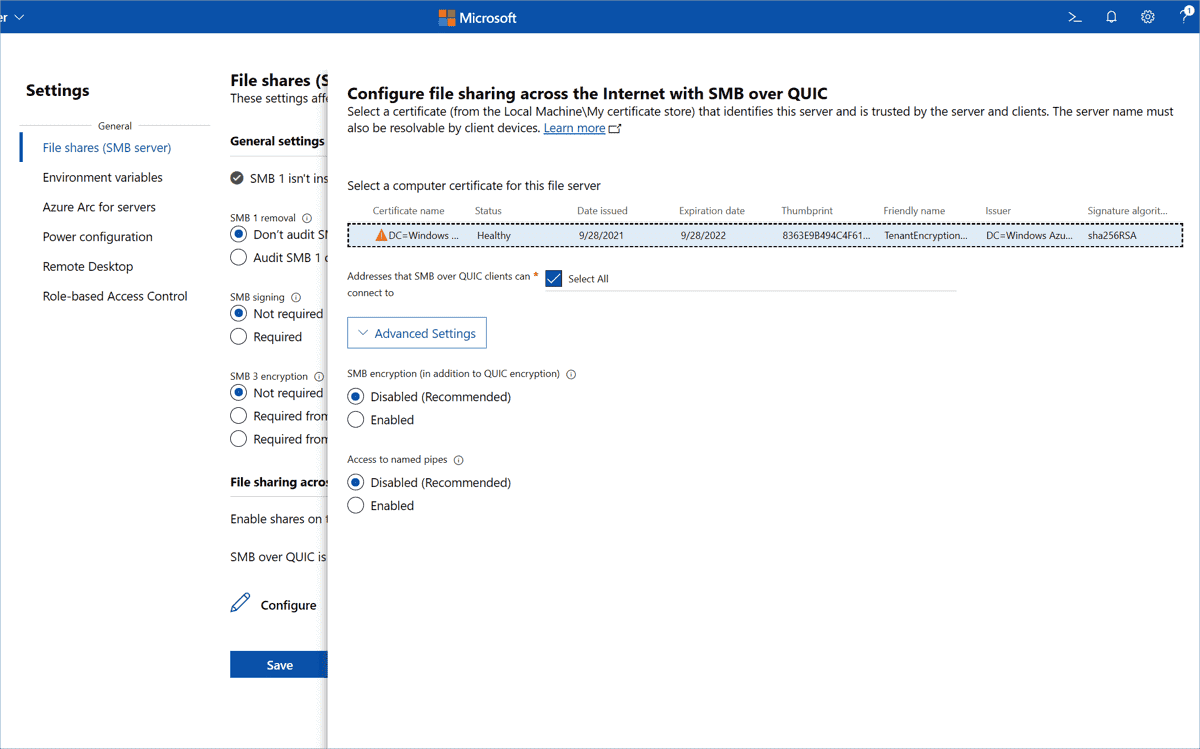 Configuration of SMB over QUIC in WAC

Azure Stack HCI saw much greater progress with the feature update to 21H2. It included some interesting innovations that can now be configured in WAC:

In addition, the OS can be upgraded to 21H2 from the web console. 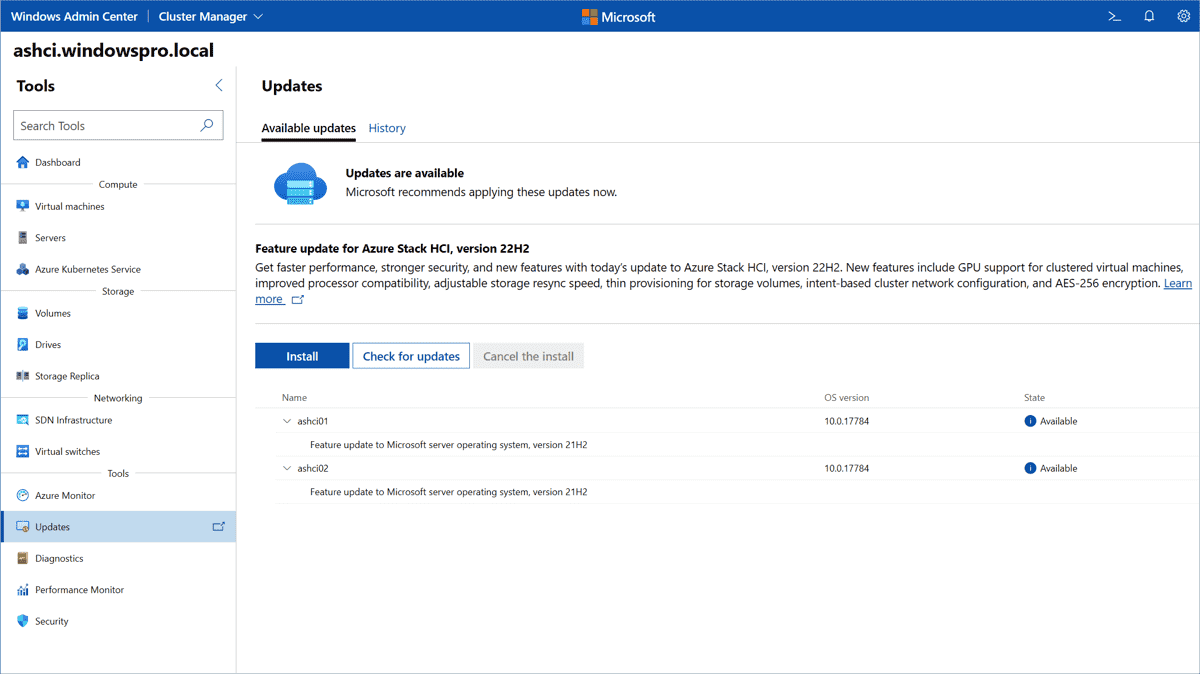 Admins can trigger a feature update for Azure Stack HCI from the WAC.However 22H2 doesnt exist yet its another bug in WAC

The automatic activation of Windows Server in VMs (AVMA), a long-established feature in Windows Server, is now also available in Azure Stack HCI and can also be controlled via WAC. 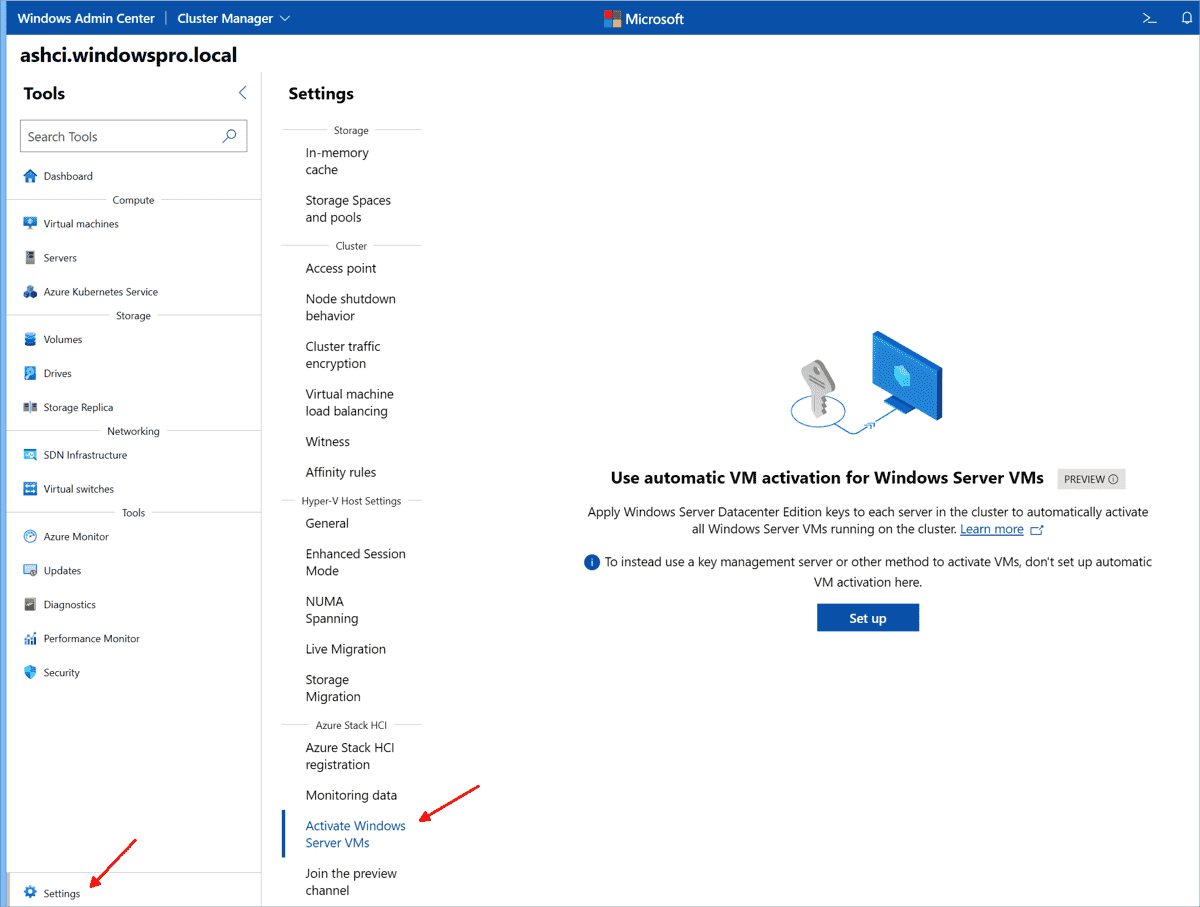 The development of WAC, however, does not depend only on innovations in the operating systems. Many functions that are available in traditional MMC tools are still missing in WAC and need to be added. The virtual machine tool, for example, still lags behind the Hyper-V Manager in terms of functionality. With the new option of creating a VHD(X), the WAC now closes one of these gaps. 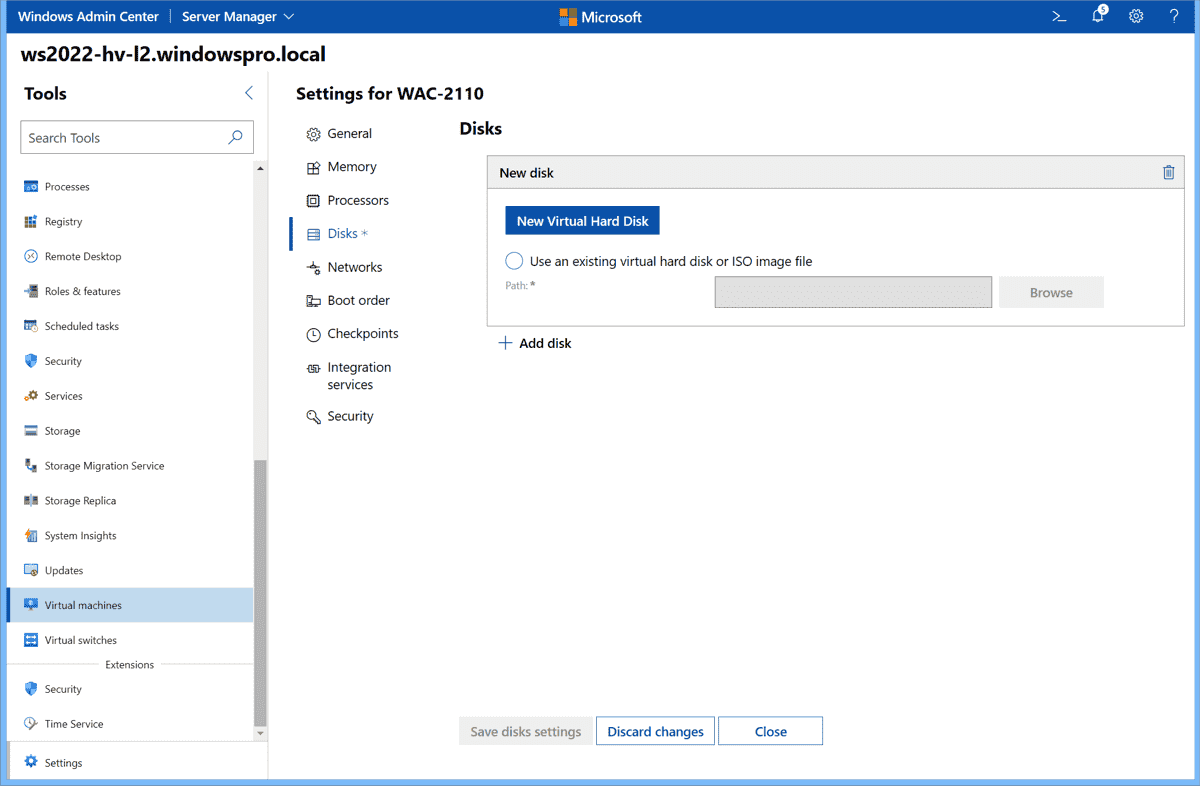 The Server Manager, introduced with Windows Server 2012 and part of the RSAT, can apply certain actions, such as adding roles to multiple targets at the same time. The Admin Center, however, can manage only single servers or clusters.

The WAC 2110 does not fundamentally change this shortcoming either, but with the multi-resource dashboard, it takes a first step toward multi-server management. However, this doesn't yet ship with the core system; rather, it must first be activated using an experiment key. 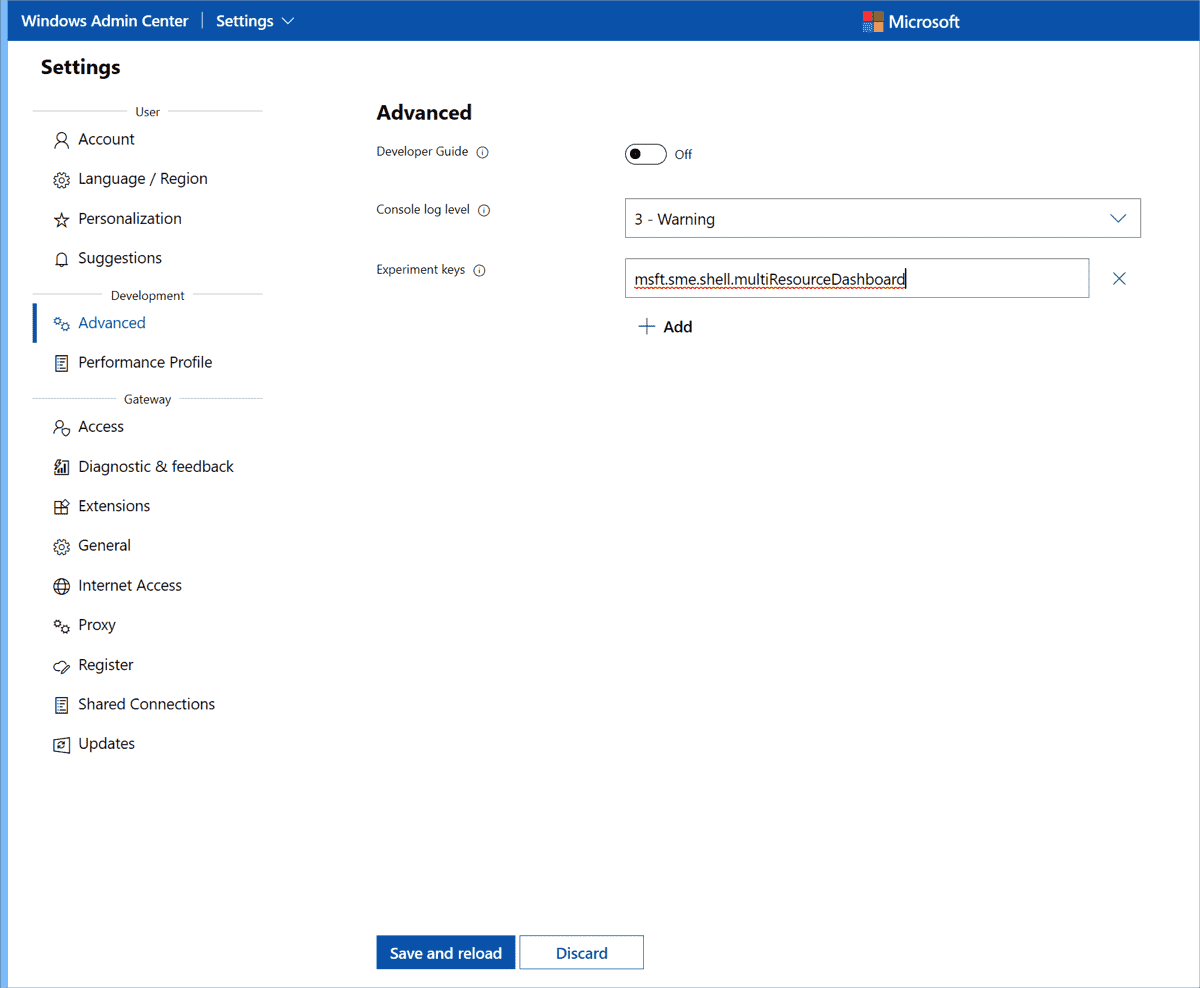 The dashboard is still in the early stages of development

The dashboard provides an overview of all connected computers. It shows not only messages from the event log, but also the utilization of CPUs, RAM, and disks. This allows admins to see at a glance whether there are bottlenecks anywhere. 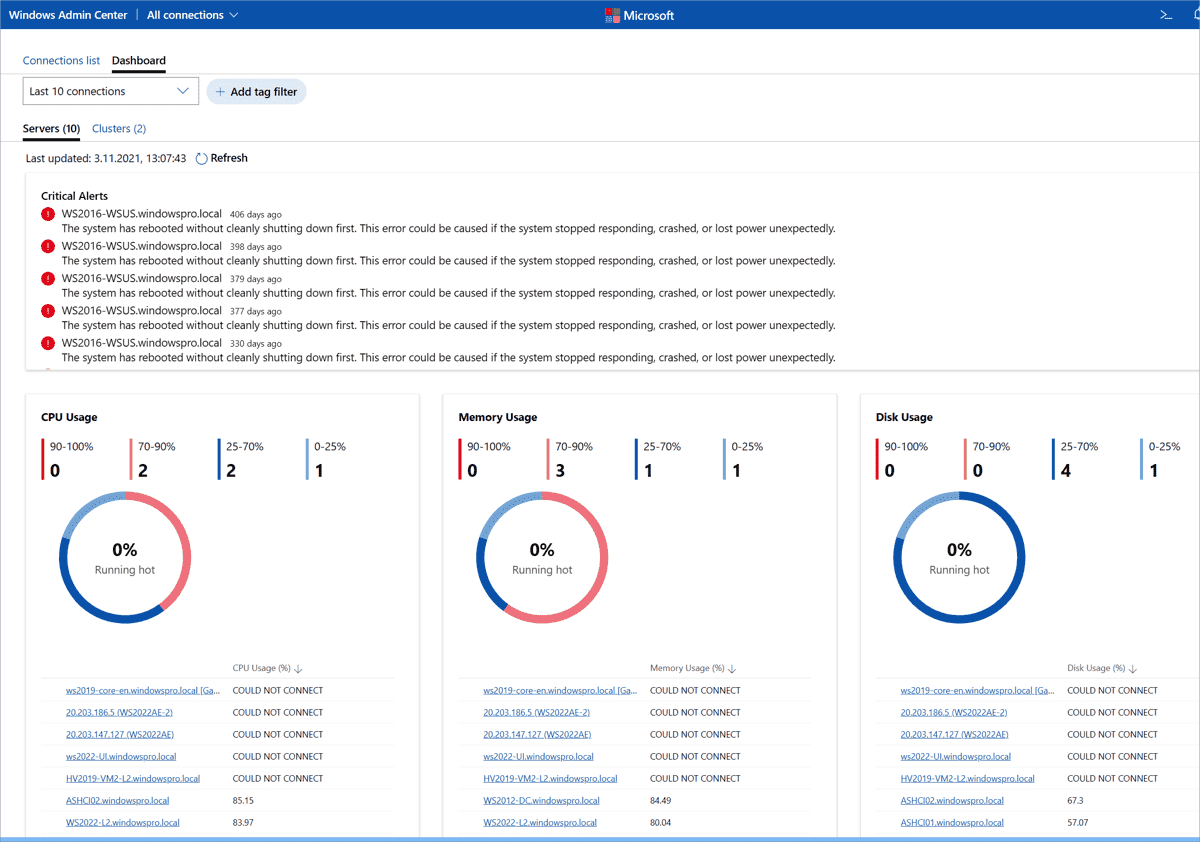 The dashboard provides information about the utilization of multiple systems

Another innovation of WAC 2110 is the integration of the security tool into the core system. It was previously only available as an extension. However, after an update, it can happen that both versions continue to coexist because the package name has changed. In this case, you have to remove the extension manually.

Another new feature is the automatic logout from the Admin Center after a configurable period of time has elapsed. This option can be found in the settings under General. 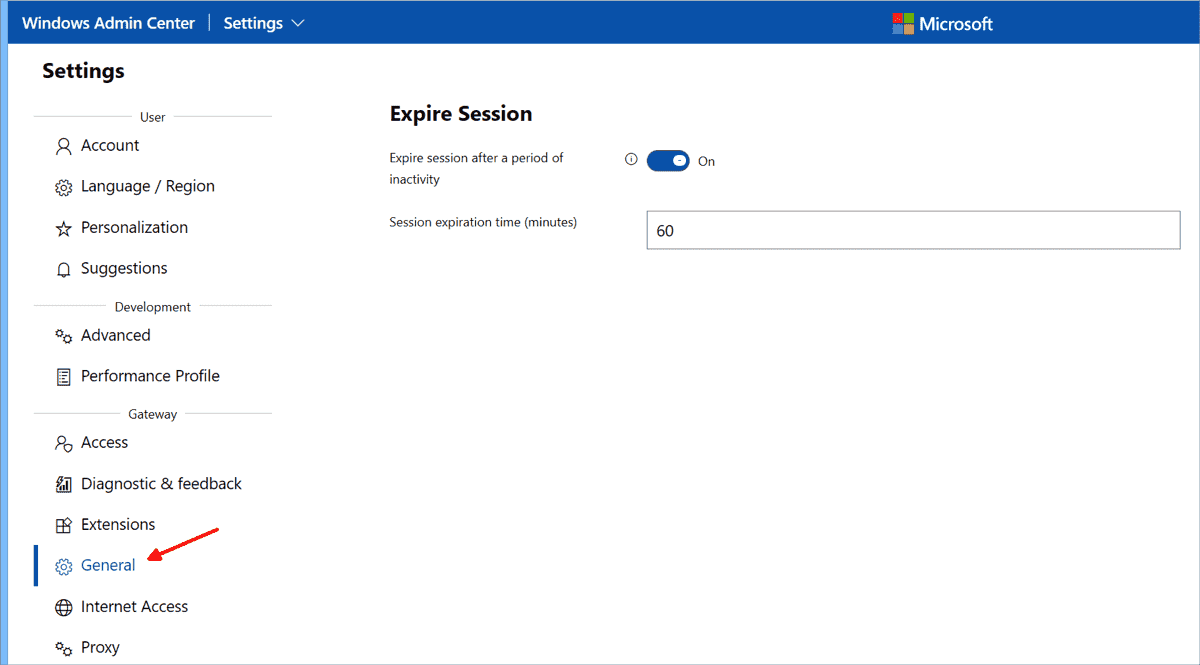 The announcement of WAC 2110 claims higher performance and greater security for the tools. In particular, Microsoft says that the response times of the VM tool have been significantly improved.

In this release, Microsoft has also stated that it has addressed the notorious problems with delegating credentials via CredSSP. The error where PowerShell can't find the session configuration can now be resolved by adding users to the local group Windows Admin Center CredSSP Administrators on the gateway. 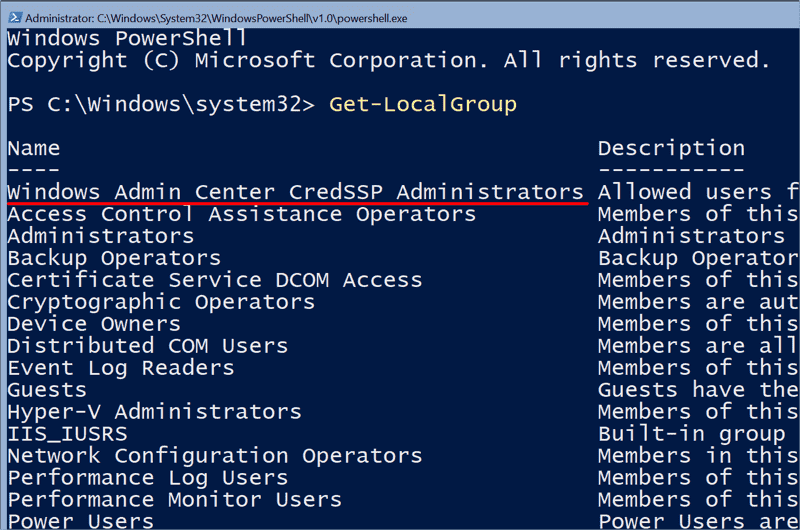 Regardless of this, connection problems of all kinds are still a constant experience for WAC users. These were particularly persistent during my tests when managing Windows 10 PCs.

The WAC has had an integrated update mechanism for some time, so you can save yourself the effort of manually downloading and executing the MSI package.

In practice, however, the upgrade from 2103 to 2110 failed without giving any error message; hence, the manual procedure was required after all. It turned out that the download link points to the Eval Center, so you even have to register for the GA version.

In addition to the updated platform support, Admin Center 2110 includes some new features that primarily benefit Azure Stack HCI and virtual machine management. The prospect of multi-server management is promising.

Overall, the WAC is simply too cumbersome and too slow for many tasks, even after the claimed performance improvements. In addition, there are the notorious quality problems. The web tools are therefore especially recommended for managing Azure Stack HCI, as there is no GUI alternative to the WAC for many tasks.