In our previous article, we imported Windows 8 as our operating system, designed a driver structure, and added an Application to deploy. But these are all just components in an install. In the same way that a blueprint pulls together all of the components in a house, we need a way to tie together the components in a deployment. This is where Task Sequences come in!

A Traditional Image vs. a Task Sequence ^

Most organizations, at one time or another, have used traditional sector based images. These images are mirror copies of a preconfigured hard drive. All software, settings, installed drivers, etc are on this image. The problem with this setup is that one image won’t fit all computers. When this happens, an organization will have to create another image for a specific set of machines.

A Task Sequence, on the other hand, is a series of steps that automate the deployment process. For example, you can have a single task sequence that dynamically pulls only the drivers needed for the computer being imaged. This cuts down on images created for specific computer models. With MDT, you can also specify items like “everybody gets Office 2007 except these certain computers. Give them Office 2010.” Application logic, like this, can allow you to drastically reduce your image count.

What’s in a Task Sequence? ^

As we mentioned earlier, Task Sequences are made up of distinct tasks. These tasks are grouped into sections. Each of these groups apply in the order shown below. Understanding these groups is the key to a successful deployment with MDT. Let’s take a look at them!

When a machine first starts a Task Sequence, they will begin the Initialization phase. This phase gathers information such as any variables or specific items applied to this computer. As we mentioned above, this is where the computer would determine if it needs to do anything special (such as installing Office 2010 instead of Office 2007). 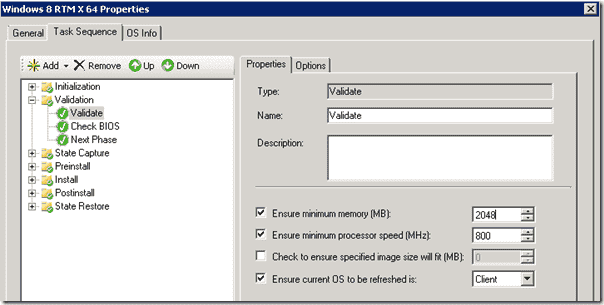 In the picture above, the minimum memory is set to 2048 MB.

With the State Capture phase, you can migrate local data from the pre-imaged machine to the post-imaged machine. This allows you to preserve user information, local groups, network settings, and other critical items.

During this phase, the machine is prepped for the operating system installation. The hard disk is formatted, drivers are injected, and Windows Updates can be added. If you are taking advantage of BitLocker, it can be enabled here. 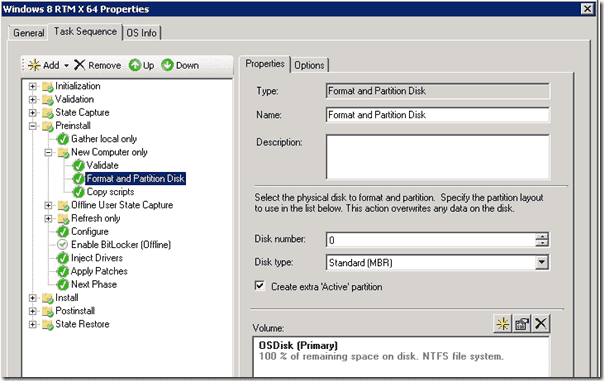 The Format and Partition Task can automatically create the extra partition needed for BitLocker.

These two groups handle the actual operating system install and first use configuration. During the PostInstall phase, you can do things such as create a Windows Recovery (WinRE) option.

The PostInstall Restart command will cause the computer to boot into the newly installed OS.

While all of the other groups took place within Windows PE, the State Restore phase takes place within the newly installed OS. In this phase, we can install applications, join our machine to the domain, and other common OS tasks. 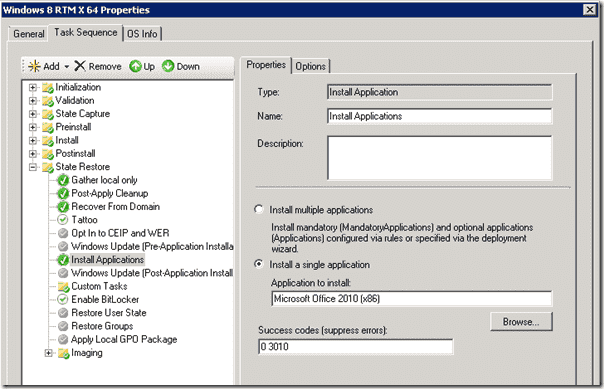 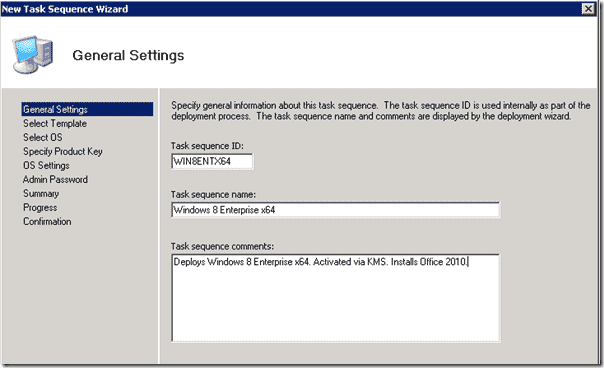 Being specific will allow for you to easily recall Task Sequence IDs when troubleshooting. 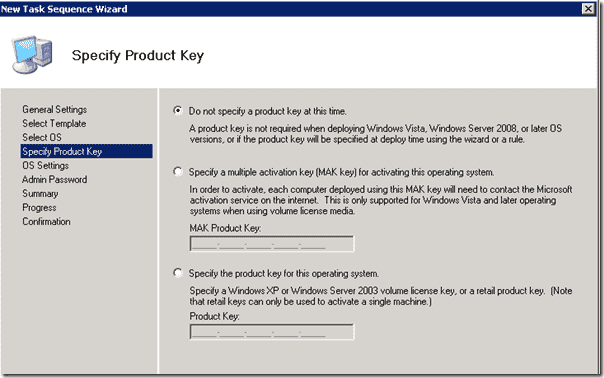 The first option allows us to use KMS

We will then proceed through the remaining wizard selecting the rest of the defaults and entering a default local administrator password. Once the wizard has finished, we can now see our newly created Task Sequence!

Within the physical DeploymentShare, Task Sequences are stored in C:\DeploymenShare\Control\

In this post, we brought together our Windows 8 operating system and our application into a Task Sequence. We learned about the advantages of Task Sequences over a traditional based image. In our next post, we are going to granularly edit the Task Sequence in order to manage our client’s BIOS settings.