You probably read about the new features that the update brings because many sites reviewed the leaked version weeks ago. Here is just a quick summary:

Update: Check out these videos from Microsoft that explain the new features.

There are few other changes that didn’t make it in my list. Let me know if you found another new feature in Windows 8.1 Update you like.

The update should now be all available in all countries via Windows Update. On a 64-bit machine, you can see it in the Windows Update app in the Control Panel as “Windows 8.1 for x64-based Systems (KB2919355).” 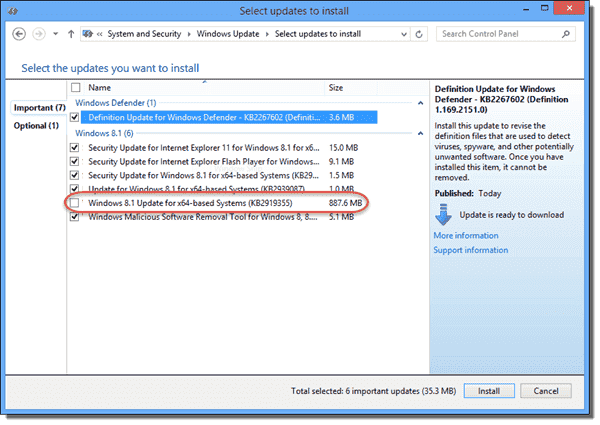 If you don’t want to download and install it through Windows Update (for instance on machines with no direct or indirect internet connection) you can also download it directly from Microsoft. There are several updates and as far as I can see most of them are just fixes. The big one with the new features is KB2919235. Some sites also list the KB2919442 update, but this was available previously available and is a prerequisite.

For more details about downloading Windows 8.1 Update have a look at this My Digital Life article.

If you have to install the update several times manually on different machines you might want to use the batch script below which I copied from Michael Crump. I just added “/quiet /norestart”, so you don’t have to confirm every update. If you downloaded the updates with Internet Explorer you might want to get rid of the security warning with the Sysinternal tool Streams which removes the data streams that Internet Explorer added. I also removed the KB2919442 update. Add it if you didn’t install it yet.

Update: Just noticed that the original update files on MSDN and Download Center are different. I updated the batch script accordingly.

What do you think about the update? Is Windows 8.1 now an option for your network?