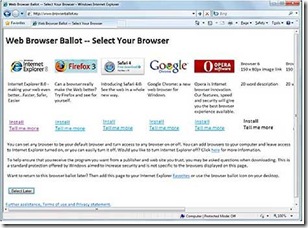 It appears the European Commission and Microsoft are close to an agreement in the web browser-bundling antitrust case. I reported last week in the 4sysops news section that there probably will be no Windows 7 E without Internet Explorer in Europe. Instead, Microsoft will offer a Ballot Screen that allows users to choose a web browser. The Ballot Screen will also be displayed on already installed Windows XP and Windows Vista computers. This article summarizes the most important facts about the Ballot Screen.

Obviously, Windows 7 without a browser would have meant too much hassle for PC manufacturers, software vendors, and customers. It is also possible that the European Commission wouldn't have accepted Microsoft's proposal to deliver Windows 7 in Europe without any web browser. I have already outlined my view about this bizarre antitrust case before. I think Microsoft made the right decision, not because we need more competition in the browser market, but because a special European Windows 7 edition would have caused too much trouble. I am now waiting until Symantec & Co. will want a Ballot Screen for desktop firewalls, antimalware software, backup software, etc.

The following summary is based primarily on Microsoft's Proposed Commitment (Word file).