This review was written by Gilberto J. Perera from LaptopLogic.com - A well established guide for laptops. On LaptopLogic you can find the best Toshiba laptop reviews and go through the latest ultraportable laptops.

With the release of Windows 7 less than a year away, Windows enthusiasts are looking forward to the changes and improvements to the new Windows operating system. Among those improvements is the facelift that the taskbar has received in this iteration of the operating system. This article will describe the new taskbar and list some of the improvements made in this version. If you have any comments or questions, please list them below.

Note: Windows 7 Build 7000 was used for this review

As you'll quickly notice Microsoft has kept the same layout as previous version of Windows except it is now taller. We'll discuss the components below.

Some of the Taskbar functional and visual enhancements have led to a series of changes. When the mouse pointer hovers over the open program a short description will be displayed (see image above).

Aside from the aesthetic and functional improvements described above, a plethora of new options have been made available. I will describe some of those options below. 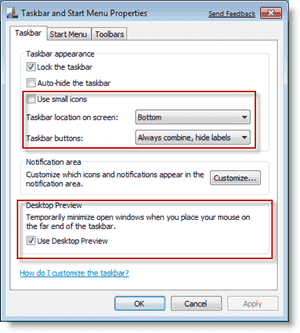 The Taskbar and Start Menu Properties window allows you to configure the settings for these items. Some of the additions to this version of Windows are;

The capability to use small icons for the taskbar (this will automatically resize the taskbar and reduce its height; this will also disable the display of the date).

You will also be able to set the location of the taskbar using the drop-down (you can still drag the unlocked taskbar to any location on the desktop).

You will have the option of temporarily viewing the Desktop by simply placing the mouse on the far end of the taskbar (over the new desktop button).

Considering that this is a beta build of Windows 7, I am very pleased with some of the aesthetics and functional elements that appear to have been improved in this beta of the upcoming OS. I really like the use of icons instead of icon and text for open programs. I also like the ability to use larger icons on the taskbar.

It seems that Microsoft has focused on simplifying and improving the overall user experience. I only hope that the next iterations of the beta will show Microsoft's attempt to mimic a dynamic taskbar/dock like that found in the Mac OS.