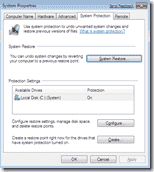 Windows 7 System Restore, sometimes also called System Protection, has some useful enhancements. In this post, I will examine the new features and will also give some hints about how to tweak Vista System Restore.

System Restore is a Windows feature that is also supported by XP and Vista. The fastest way to access System Restore is by selecting the properties of the Computer entry in the Windows Start Menu. System Protection can be found as a link on the left-hand side in the System Restore applet.

System Protection allows you to restore a Windows installation to a previous state. By default, Windows creates a system restore point once a day, as well as every time you install software or device drivers. If you messed up your system, you can use System Restore to undo system changes.

System Restore points should not be confused with snapshots. Reverting a computer to a previous restore point will only undo changes that are relevant to the operation of Windows and installed applications. This prevents data files from being reverted to a former state, which makes sense in most cases. Microsoft has published the complete list of all monitored file extensions.

In Windows Vista, System Restore is based on Shadow Copy technology, which is more reliable than the file filter of previous versions of Windows. Furthermore, those shadow copies also contain changes in data files. This feature allows you to restore a single document to a previous state through its file properties. Thus, technically, it would be possible to revert the whole system to a previous state. I have learned to value snapshot technology in virtual environments and was hoping that Microsoft would introduce such a feature in Windows 7. Unfortunately, I was disappointed. 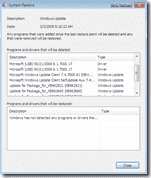 However, Windows 7 System Restore has some nice enhancements. The most important one is the ability to list all changes that might be affected when returning to a certain restore point. This way, you won't be surprised that applications you installed will be missing after a system restore. My only complaint here is that too many irrelevant changes are displayed. System Restore does not only list affected program and drivers, but also all installed patches. This list can get very long over time. It would be nice if System Restore had a filter that would allow you to view only affected drivers or programs. Moreover, it would be great if it were possible to enlarge the windows size of this applet. 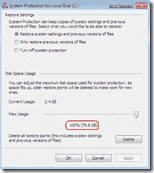 Another improvement is that you can now configure the amount of disk space that is occupied by System Restore. This was already possible in Windows XP, but for some reason, this feature has been removed from Windows Vista. What I find funny is that, in Windows 7, you can use all of your disk space for system restores. In XP, the maximum was 12%, which probably makes more sense. I have read that there is a workaround to configure the maximum restore point size in Vista too, but I have never tried it.

Windows 7 System Restore has another new configuration option "Only restore previous version of files". I only understood what this setting is for when I enabled it and tried to run a system restore afterwards. This configuration actually disables System Restore; that is, you can't undo operating system changes anymore. As I outlined above, the Shadow Copy function of Windows does not only monitor system files but also data files, i.e. files with extensions that are not in this list. Therefore, if you enable this setting, you will still be able to restore single documents to a previous version, but system restore will no longer be possible.

Note that enabling this feature does not delete restore points that have been created previously. If you switch back to the default setting "Restore System Settings and previous versions files", you will be able to use those restore points again.

What's new in Windows 7 is that you can now delete all restore points to free disk space for all drives in a computer with just a mouse click. This feature deletes system settings and previous versions of files. You can also delete restore points in Vista, except the last one, via the clean-up function of a specific drive. (Right click on the drive letter in Windows Explorer -> navigate to properties -> select Disk Cleanup in the General tab -> click on "More Options". ) This can give you up to 15% of your disk space back.

Also new in Windows 7 is the ability to remotely create restore points with PowerShell. This can be helpful if you want to be certain that you can undo changes if your troubleshooting efforts on a remote PC only made things worse. It is also possible to remotely restore a computer to a previous state. I wasn't able to figure out the corresponding commands, though. Perhaps you know more?