Windows 7 GodMode and all AngelModes 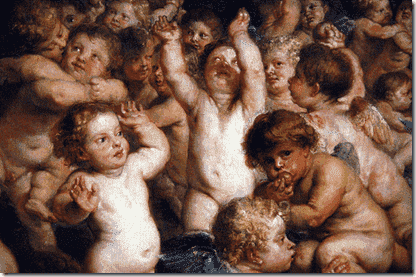 When the first article with the title "Windows 7 GodMode" appeared in my RSS reader, I didn't even click it because I already suspected that this was just another blog post that tries to attract attention at any costs. But now, as almost all major news sites reported about this super secret and super powerful Windows 7 feature, I also have to say a word or two about it. Of course, there is no such mode in Windows 7 that would justify the involvement of the term "God" by any means. This "God Mode" is nothing else than an undocumented folder that allows you to access certain Windows configuration applets directly. This just saves you some time because you don't have to navigate through the Control Panel to reach the corresponding function.

I wasn't able to figure out who first used the term GodMode. It is interesting to note that most articles I found try to make it appear as if they discovered this super secret Windows 7 feature. Some attribute it to C'net author Ina Fried, probably because she received more than 2700 diggs for her short article. I think this is also a good example of how silly some of these new social media sites are. Most of the articles that make it to the Digg front page are of comparable profundity. (I suppose this remark means that I will get zero diggs for my own article.) 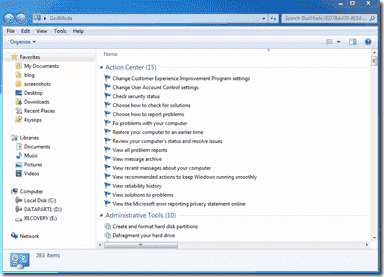 Now Ina Fried posted a follow up article with "exclusive" information from Microsoft about the GodMode incident. You won't believe it, there are even more undocumented GodMode folders. Let's see how many diggs this exclusive article gets. I bothered to try them all. The funny thing is that this exclusive information is rather useless because I will tell you now a real exclusive secret. There are many more GodModes which were not mentioned in this exclusive article. If you right click on one of the icons in the original GodMode folder, and then on "create shortcut", you will find a shortcut on your desktop which will open one of these subGodMode folders. Shall we call them AngelModes?

Some of these could be helpful, if you have to change the corresponding Windows functions frequently. The majority of these folders is quite unspectacular though. I leave it up to you to decide how god-like they are. To play God yourself, you have to create a folder and name it according to this scheme: GodMode.{ED7BA470-8E54-465E-825C-99712043E01C}. Depending on your religious denomination, you can replace "GodMode" with any term that creates enough awe. 😉