Jörgen Nilsson  Mon, Nov 8 2021Mon, Nov 8 2021  azure, cloud computing, windows, windows 11  0
If you received the error message "Windows 10 Enterprise subscription is not valid," this post will show you how to troubleshoot subscription-based activation issues on Windows 10 and Windows 11 for Azure AD joined devices. I've run into this issue a couple of times now; it only shows up 30 days after adding a second work account on an Azure AD joined device.

Why is this an issue? Well, in Windows Enterprise, there are a lot of security features that are not available in the Pro SKU. 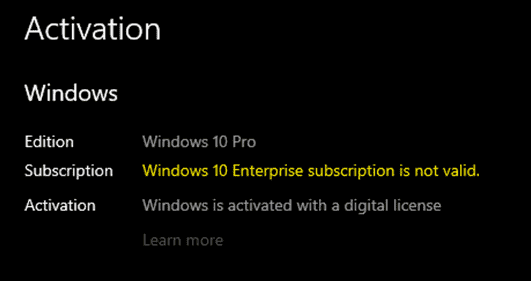 Windows 10/11 blocks the addition of more than one work account using "Settings > Accounts > Access work or school" by default, as there are multiple issues with having more than one. However, other Microsoft products prompt you to register your device when you sign into Microsoft 365 apps, for example, and now also with the Remote Desktop app. 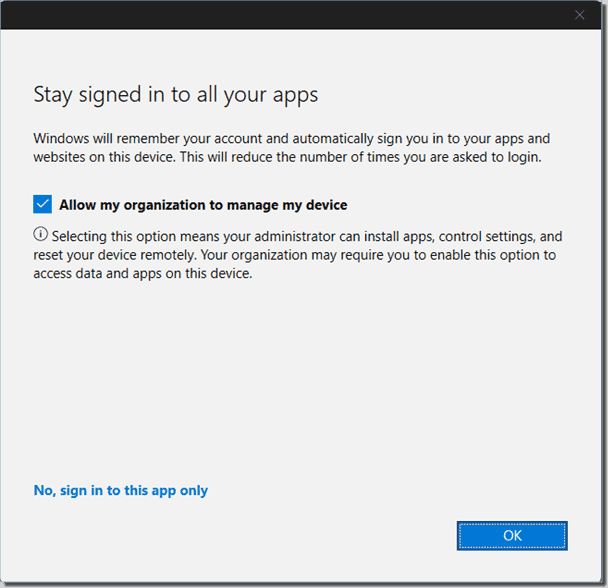 This dialog box is a really bad user experience, as it bypasses the built-in block already in place to prevent the addition of more than one Azure AD account. I really wish that Microsoft could either stop prompting in all its apps or let us control it with a Microsoft 365 app policy instead, so we could apply it to unmanaged devices and not only managed ones. If we try to add a second account, we are blocked with the following dialog box: 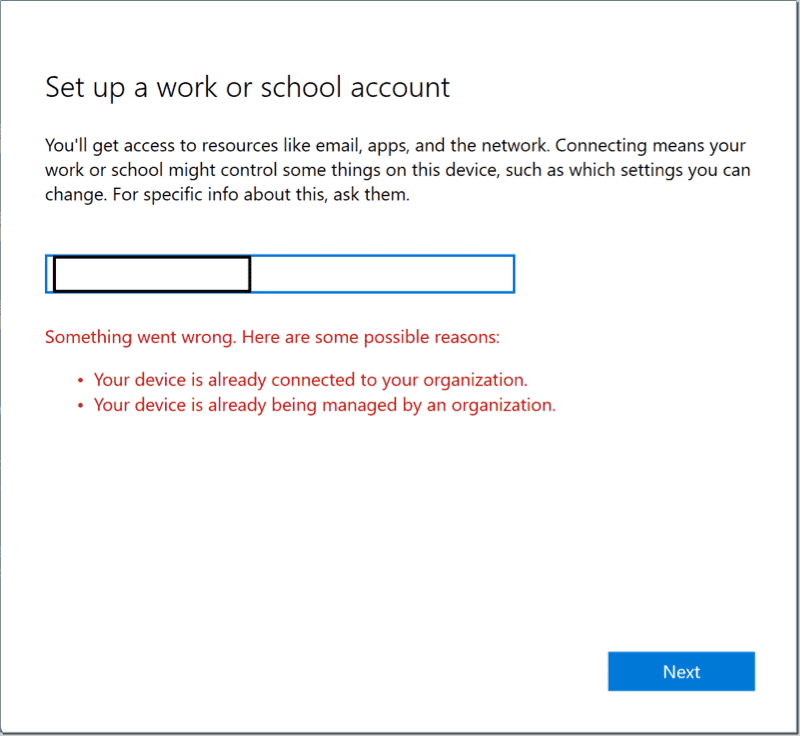 Let's look at the details.

Windows 10/11 activation on Azure AD joined devices is handled by two scheduled tasks on the device, EnableLicenseAcquisition and LicenseAcquisition, for which multiple triggers are defined.

If there is more than one Azure AD account added, they will fail with the error "0x87E10BF2". The error can be seen in the Store Event log, as shown in the picture below.

The error message is pretty clear: "All Aad users provided in the request are expected to be associated to a single Tenant." On this device, we added three AAD accounts, which is also pretty clear in the error message "Number of AAD tickets: 3." So activation will fail. 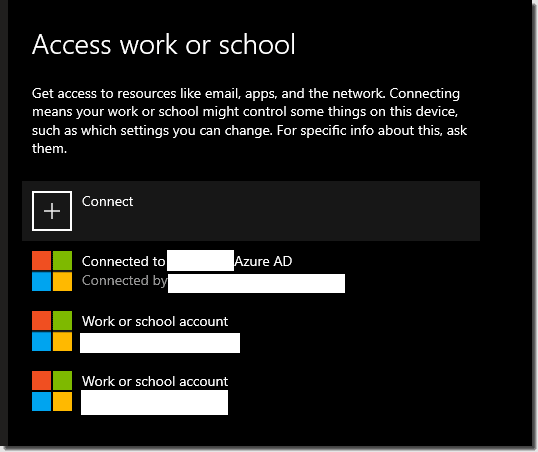 The problem is easy to solve: Remove both additional accounts and restart the computer. Activation is automatically triggered and successful. However, we need to block this, as when the end user starts Outlook, for example, after removing the Work account, they will be prompted once more to register the device.

There are many ways of configuring settings. In the Intune Device Configuration Profile Settings picker, the setting is called "Allow Workplace," as shown in the picture below. If we set it to block the dialog box from being shown by Microsoft apps, it is not shown to the end user.

We can also set the registry value, but it is more work, of course. The following registry values can also be set to block the dialog box:
HKLM\SOFTWARE\Policies\Microsoft\Windows\WorkplaceJoin: “BlockAADWorkplaceJoin”=dword:00000001

Use proactive remediation to check the Windows SKU ^

Now that we know how to solve the issue, I put together a small detection script that can be used in Proactive Remediations, which is one of my absolute favorite features in Endpoint Analytics. We then get a nice report showing which devices are running Windows 10 Enterprise and which are not. This is, as I wrote before, a big deal, as we rely on security features in Windows 10 Enterprise to be enabled; if the devices are running Pro, we have a problem.

The report produced in Proactive Remediations looks like this: 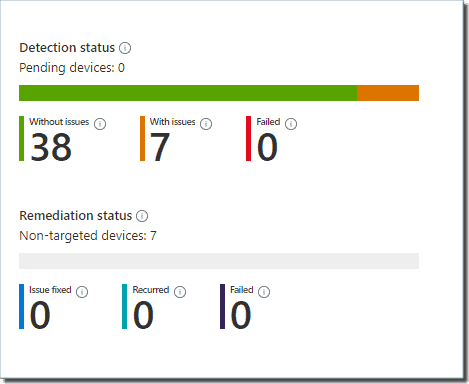 The detection script is really simple; it checks whether the Windows SKU is "4," which is Enterprise edition. The full list of Windows SKU values can be found here:
OperatingSystemSKU Enum (Microsoft.PowerShell.Commands) | Microsoft Docs

Adding the script as a detection script in proactive remediation is done with the settings shown below. 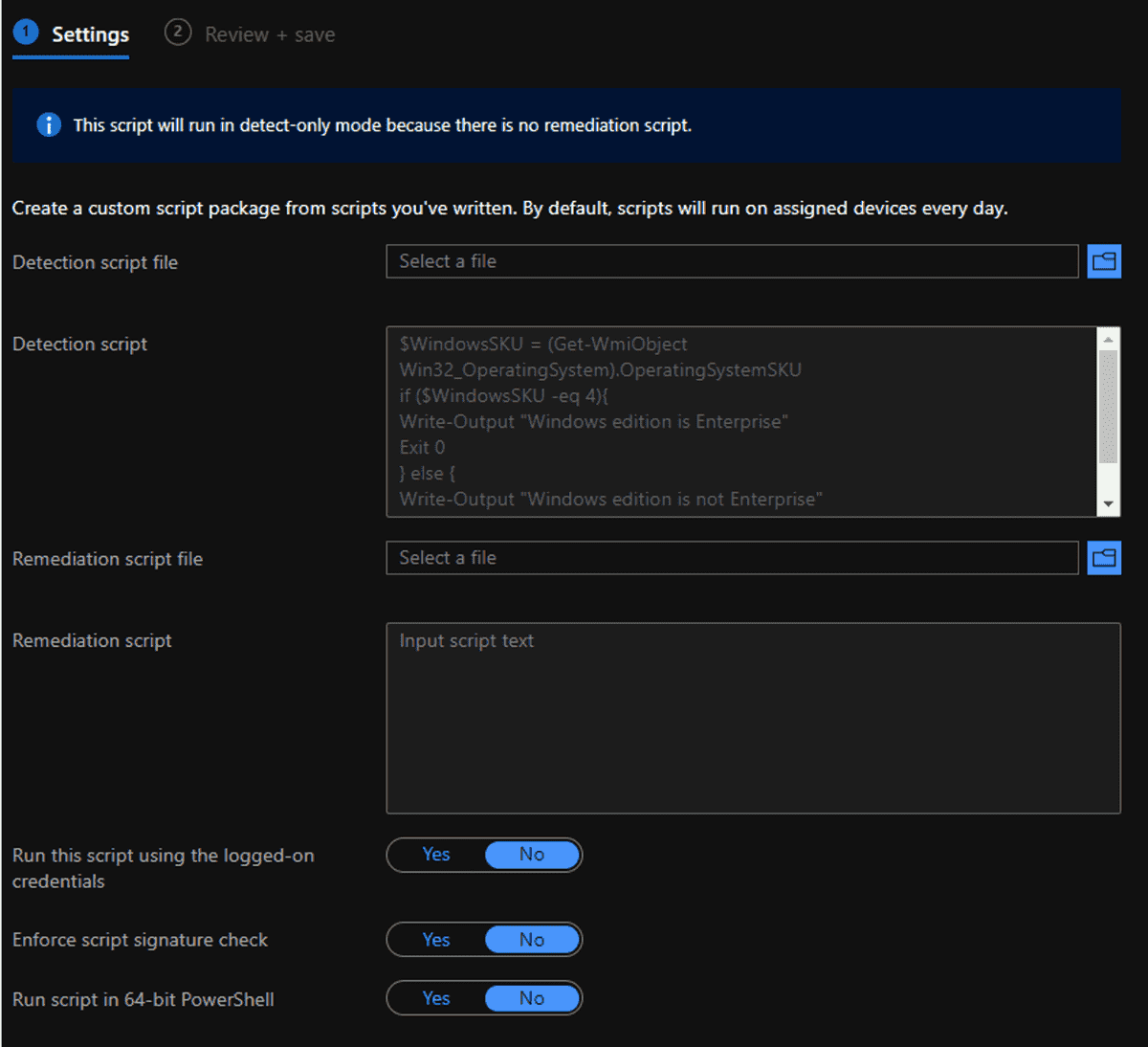 There is no easy way of remediating the activation issue, as the user has added the account themselves, but by automating the result, we could email to the end user or create a Service Desk ticket. The possibilities with PowerShell, Graph, and proactive remediations are endless.

I hope this will save time and help everyone make sure Enterprise SKU is used and Workplace Join is blocked.