Windows 10 update options – Is Windows 10 the last Windows version or not?

Home Blog Windows 10 update options – Is Windows 10 the last Windows version or not?

Michael Pietroforte  Mon, Jul 20 2015Tue, Nov 9 2021  microsoft, patch management, windows 10  0
Numerous news sites comment on the freshly updated Windows lifecycle factsheet. Whereas most journalists focus on the differences to previous Windows versions, I was somehow shocked to learn that Windows 10 appears to be just another new Windows release. I take the opportunity to blog a little about the different Windows 10 update options, that is, about Slow Rings, Fast Rings, Current Branch (CB), Current for Business (CBB), and Long Term Servicing Branch (LTSB).
Contents

Terry Myerson, Microsoft's Executive Vice President of the Windows and Devices Group, wrote a widely noticed blog post in January where he explained that, beginning with Windows 10, Microsoft will see Windows as a Service:

This is more than a one-time upgrade: once a Windows device is upgraded to Windows 10, we will continue to keep it current for the supported lifetime of the device—at no cost. With Windows 10, the experience will evolve and get even better over time. We’ll deliver new features when they’re ready, not waiting for the next major release. We think of Windows as a Service—in fact, one could reasonably think of Windows in the next couple of years as one of the largest Internet services on the planet. And just like any Internet service, the idea of asking “What version are you on?” will cease to make sense—which is great news for our Windows developers.

For me, the crucial part was the last sentence. The term “Windows version” is supposed to no longer make sense. Just like you don’t ask what version of Office 365 or Azure you are using, everyone would just run the same Windows.

Even though I loved this idea, I had my doubts about whether Microsoft is really serious about offering Windows as a Service. Why call the new release “Windows 10” and not just “Windows” or perhaps “Windows 365”?

Of course, Microsoft will change a few things about the way Windows will be updated in the future. Previously, new features were only introduced with service packs. Windows 8.1 was such a service pack. Hence, the only real new thing is that Microsoft will deliver tiny “service packs” more frequently. Perhaps Terry Myerson just wanted to say, “The question of what service pack you are on will cease to make sense.”

That’s certainly good and necessary, but it won’t really turn Windows into a service in the sense that Office 365 is a service. Software also doesn’t become a service just because you pay a monthly or yearly fee to earn the right to receive updates or continue using the product. This is what I would call “renting software.” Businesses could rent Windows before. So, there’s nothing new here.

An important characteristic about Software as a Service is that service customers don’t really have a choice of whether to update their systems with new features or not. It appears that Microsoft is trying something like this on consumer PCs. Windows 10 Home users will probably be unable to turn off Windows Update. “Windows Insiders” already enjoyed this feature.

Of course, it won’t be a big deal for IT pros to turn off Windows 10 updates anyway. However, many end users won’t know how to do this, which means that the majority of Windows users will always have all the latest updates installed. Many will complain about this kind of paternalism and, as soon as the first updates break systems, the outcry will be noticeable.

However, it seems even consumers will be able to choose between the “Slow Ring” and “Fast Ring” setting. If you are in the Slow Ring, you will receive updates only after those in the Fast Ring have already discovered most of the bugs. 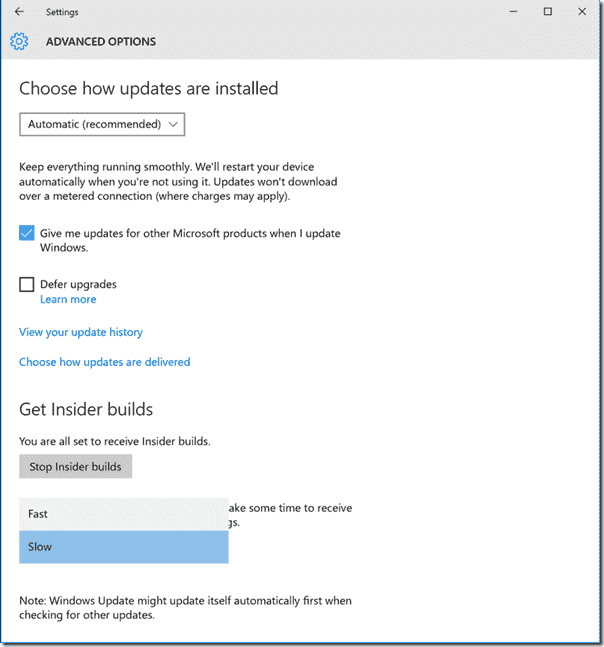 If I understood it correctly, Windows 10 Home users will be on the so-called Current Branch (CB). In contrast, businesses running Windows 10 Pro can choose to be on the Current Branch for Business (CBB) and receive updates four months after the CB users through Windows Update for Business (WUB) or Windows Server Update Services (WSUS). The point about WUB seems to be that admins have more control over the updates they install, and when.

Enterprise customers running Windows 10 Enterprise will have the greatest flexibility. They can choose to be in the Long Term Servicing Branch (LTSB), which allows them to only receive security updates but no new features. Every two or three years, Microsoft will then release a new LTSB build that contains the new features. I suppose the LTSB build will be the new service pack. So we won’t ask what Windows version or service pack you are on, but what LTSB build you are running.

All in all, things are getting a lot more complicated, which can be seen as additional proof that there is no such thing as Windows as a Service. The point about Software as a Service is that customers don’t have to deal at all with updates. However, with Windows 10, admins will have to invest more time than ever in managing Windows updates. Most of the time will be needed to decide which feature updates you deploy.

It appears that, after five years or so, you will then again have to decide whether you upgrade to the next Windows version or not. I wonder if Microsoft is already working on Windows 11 or Windows 20 or whatever the marketers believe sounds better. I am afraid a Windows world without versions might just have been a dream. Wouldn’t it have been great if we never have to deal again with the upgrade stragglers whenever the support for a Windows version ends?

Maybe I am just reading too much into this new Windows lifecycle fact sheet and Microsoft is still serious about Windows as a Service. It could be that Redmond just wants to be on the safe side. If the Windows as a Service thing turns out to be a bad idea, Microsoft could still return to the old upgrade scheme. Technically, it is unclear if it is possible to transform Windows only with updates into a completely new version.