Joseph Moody  Fri, May 5 2017Fri, May 5 2017  microsoft, windows 10  0
Microsoft has finally announced a competitor to Chromebooks or devices that can run Chrome. Windows 10 S aims to provide fast and familiar devices that are both cheap to purchase and easy to manage.
Contents

In case you were not aware, Microsoft has been taking a beating where cost is the primary driver – chiefly in the education sector. For several years, Google has provided an ecosystem that is simpler to manage and cheaper to scale. There was no need for server administration and less need for onsite techs, as everything was in the cloud.

Nothing is perfect though. Lack of customization, less than stellar reporting, and limited automation are just a few of the downsides with this approach. Overall, Google's model has merit though and one huge benefit: the ability to influence tomorrow's consumers. The Windows ecosystem faces four challenges in adopting this model: speed, cost, complexity, and the IT department. Right now, Windows 10 S addresses the first three.

The S in Windows S does not really stand for anything specifically. If you had to make it stand for something though, it would be Store or Secure. Devices running Windows 10 S are limited to running Store apps (Universal Windows Platform apps).

As a person who converted to a Windows RT OS, sticking to Store apps does not bother me anymore. Everyone in IT wants a streamlined application infrastructure but few want to admit that traditional apps stop that from happening. The fact that the Office team at Microsoft is moving the full Office suite into the Store shows how much that mindset has changed internally.

Out of the box, devices have built-in apps, Store apps, Office, and Edge. Improvements to Edge will be key to universal adoption. Microsoft has been pushing Edge to be feature par+ with Chrome in Progressive Web App support. Every app on a Windows 10 S device is managed in the AppContainer. This gives each app its own sandbox to play in. This increases security and performance by preventing application bloat on the actual OS.

The biggest selling point is cost without a huge performance compromise. We have all seen ultra-cheap Windows devices before – in all honesty, they were bad. Windows 10 S devices will start below $200 and will support 15-second logons. This is on par with Chromebooks of the same price range and light years better than many current Windows devices. Devices running Windows 10 Pro can be moved to Windows 10 S for free. There is currently no guidance on moving from Windows 10 Education to Windows 10 S.

To use an economic term, Microsoft's ecosystem has a few key moats that can keep Google at bay. Bringing the recognition power of Office into the store is one. Two others are OneNote (with Windows Ink) and Minecraft. Touch devices running Windows 10 S can use the OneNote stylus. If you have ever used one, you will understand how it seamlessly ties together the written and digital worlds. Windows 10 S devices will also come with a subscription for Minecraft Edu. 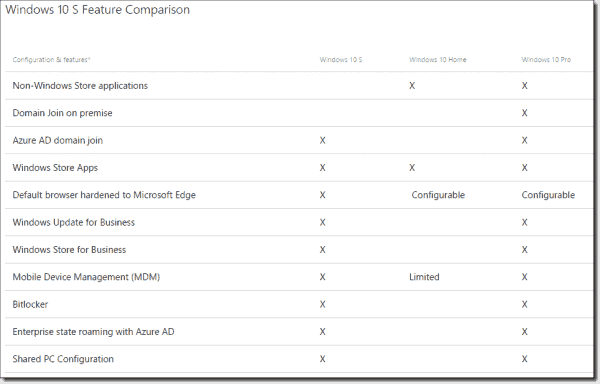 When reducing complexity creates a revolt

Almost everything above represents a huge improvement for markets like education and the public sector. Cheap devices that are somehow faster and more secure – somehow this is what makes the difference though.

Windows 10 S does not support domain join on premises. It obviously does not support resource hogs such as Folder Redirection, the System Center Configuration Manager (SCCM) client, and the Group Policy client. Instead, devices are Azure AD joined and managed with mobile device management (MDM) via Intune.

OS refresh and repair is simpler with the system image Intune tool. Windows 10 S devices can run through a completely automated image process when using a customized USB key. The process, similar to Windows Configuration Designer, can take as little as 30 seconds to complete. The out-of-box to fully useable process takes an estimated 20 minutes or less.

All of this brings us to the last hurdle – the IT department itself. For Microsoft to see widespread adoption of Windows 10 S, either they need the embrace of traditional IT administrators, or they need to bypass them all together. Organizations without streamlined infrastructure are probably invested in Chromebooks already and are unlikely to come back soon. Microsoft has to persuade organizations that rely on SCCM, Group Policy, and on-premises domains that they are not abandoning prior investments by adopting these types of devices.

Microsoft is giving several options for moving forward. This is their (first) full attempt at an ecosystem that can scale regardless of the resources in the technology department. While a savvy teacher in a small district could handle a full online environment, we all know there is a huge difference between handling and properly managing. Full-fledged IT departments can use Windows Update for Business, Store for Business, Intune, and Azure to customize their experience with Windows 10 S. They can tie all of this into existing infrastructure to provide a seamless experience across platforms and operating systems.

Obviously, Windows 10 S is not for everyone. It does provide the framework for cheap and fast devices that are Chromebook competitors. In my tinted eyes, Microsoft's online solutions are top notch – all that was missing was the device. If getting to the lower price point without a huge performance hit involves a new OS, I happily accept that change. How about you?