The live webcast will begin at 9am (Pacific) on Wednesday, January 21. Check out this link for your local time. If you miss the live event, you can watch it on demand afterwards. 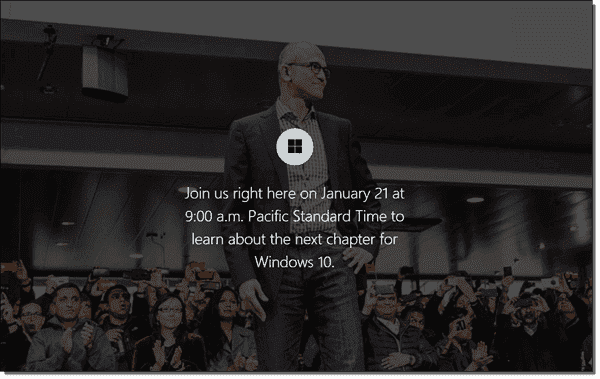 Wondering what Microsoft’s gaming boss is doing at a Windows 10 event? It appears that Windows 10 will run on Xbox. Considering that Stephen Elop (Executive Vice President, Microsoft Devices Group) will not be part of the show, Ballmer’s dream of one operating system that rules them all will probably have to wait a little longer.

Many news sites agree that Microsoft will announce the availability of the Windows Consumer Preview. Leaks of what many would call the beta version of Windows 10 have been appearing on the web for some weeks.

Maybe we will also hear a little about Microsoft’s new web browser, Spartan. When I first heard the name, I felt that Microsoft had finally found the right name for Internet Explorer—compared to its competitors, IE is the most Spartan browser because it lacks many important features, most prominently a good ecosystem for extensions. However, if all these journalists’ secret sources are right, then Spartan and Internet Explorer will co-exist on Windows 10. Strategically, this might be a bad move because neither IE nor Spartan will then lead the browser usage statistics. Regardless, we will probably receive some reliable information from official sources next week.

The support of two different browsers would align with Microsoft’s new both-for-and-against strategy regarding the Start menu. My biggest hope for the Consumer Preview is that the surprising success of Windows 8.1 will cause Microsoft to revise its decision to hold on to the Windows 95 UI. I don’t think that Redmond will dump the Start menu in Windows 10, but I hope that the Start screen will be the default app launcher. Microsoft really needs to forcefully move ahead and finally leave the Windows 95 legacy behind.

In the meantime, you might want to read up on some of our Windows 10 Technical Preview articles in preparation for the Consumer Preview event. What’s your biggest hope for Windows 10?