James Rankin  Fri, Dec 9 2016Fri, Dec 9 2016  deployment, windows 10  2
Should you do an in-place upgrade or a fresh install when applying Windows 10 feature upgrades? In this article, I discuss the pros and cons of each option.

Windows 10 brings a new set of challenges for deployment and management. Universal Windows Apps, Start menu and interface changes, user accounts and synchronization – these are a few of the areas where administrators and architects will find Windows 10 markedly different from previous iterations of the Microsoft operating system.

The largest change, though, is arguably the move from the previous updating paradigm to the new Windows 10 "servicing" model, and it is this that introduces one of Windows 10's greatest challenges. It is an important question about Windows 10 deployment, and possibly the most pertinent one for anyone adopting the new operating system. When applying Windows 10 "feature upgrades" – which are new releases of the OS, arriving on a regular basis – do you allow an "upgrade in place" to proceed, or perform a fresh install, sometimes also called "wipe and reload," each time?

This doesn't just apply to Current Branch for Business – LTSB has an update available every year, and if you wish to take advantage of the new features available in that annual release, you will need to perform an upgrade of the operating system.

When initially moving from the previous version of Windows (XP, 7, or 8) onto Windows 10 for the first time, a "wipe and reload" approach makes a lot of sense. Traditionally this is how Windows operating system upgrades have been approached, but because of Windows 10's "fast update" cadence, this may no longer be sustainable.

OS upgrades were a project that previously came along every three or four years and could be allocated the required amount of resource, but now, with potentially two releases in every 18-month period, Windows admins have reached a state of "perpetual migration." Performing the required testing, remediation, and deployment planning that goes with this puts an extra strain onto IT departments that may already be short of resources.

Seasoned IT pros on in-place upgrades ^

Seasoned Windows veterans have a very dim view of in-place upgrades. This prejudice towards performing an in-place upgrade is borne out by the statistics below (compiled from a survey of EUC staff). 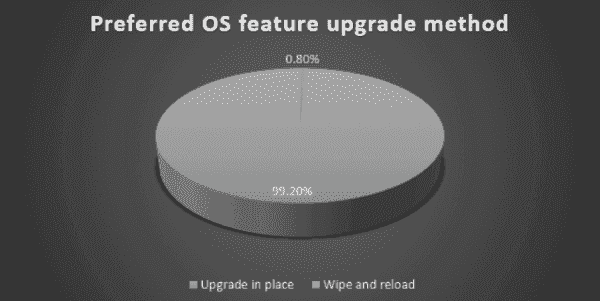 In the main, experienced administrators are worried about the potential for "cruft" from the previous user environment persisting into the upgraded one, and also the possibility for applications and/or the OS to be unstable or broken once the upgrade is completed. Incompatibilities or even security threats will be brought into the new environment if the upgrade route is taken. This has to be balanced out, though, against the persistence of user applications and data that the "in-place upgrade" provides to the user.

If you decide that the "wipe and reload" approach works best for your environment, then you need to put tools into place to persist the pertinent areas of the user experience, to ensure that your users have a smooth transition from each feature upgrade to the next. The key areas are: 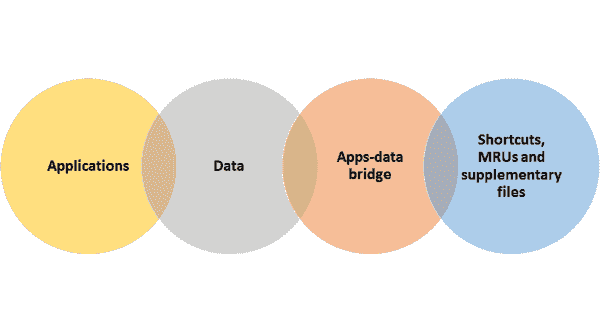 Ensuring that access to all of these areas is maintained is vital to being able to maintain user productivity once a feature upgrade has been applied. It is also vital to identify and communicate user interface changes and feature additions/removals that may have occurred during the feature upgrade application, so that users are able to effectively use the operating system from the off, and deal with any changes to their working environment.

In a VDI environment ^

If you're running Windows in a VDI environment (particularly a non-persistent VDI environment), then a fresh install may be a viable option. This is simply because VDI environments, especially non-persistent ones, often already have tools in place to provide smooth roaming between sessions, which can ease the pain of a regular operating system upgrade. Traditionally, a new OS means a new VDI base image, and there are usually already teams in place to deal with image management and updates.

If you're not in a VDI environment, then you need to decide, to put it bluntly, whether you trust Microsoft to make the Windows 10 "in-place upgrade" experience as painless as possible. Microsoft are very keen to make the point that Windows 10 is "a new way of upgrading Windows," possibly to try to combat the natural aversion that experienced Windows administrators have to performing in-place upgrades.

Certainly, the first few instances of in-place upgrades, and the associated success rates, will drive the future policies of IT departments towards them. If departments find they are performing mop-ups of failed upgrades at a rate of, say, 40% – which will probably need the wipe-and-reload treatment to fix – then it will appear more sustainable to invest in technologies that can allow for a fresh install approach.

If the failure rate is much lower, perhaps under 5%, then it may be that in-place upgrades start to be viewed as an acceptable option. However, sustaining a good user experience after the upgrades also has to be factored in, along with the fact that it will take only one major issue during an upgrade for all of the built-up trust to erode away quite rapidly.

Microsoft has to maintain a high success rate over the entire Windows 10 operating system evolution in order for people to fully embrace the "in-place upgrade" methodology – major disruptions to line-of-business applications and user productivity will not be tolerated for long.

Moving to a "perpetual migration" model is a headache that understaffed and overstretched IT departments don't need. It is very important to make the decision early on whether "wipe-and-reload" or "in-place upgrade" is the method of choice to suit your estate.

To support this, it may be necessary to adopt a tool or stack of tools that allows you to decouple the user data, applications, and "personality" from the underlying OS, so that they can easily be injected back in if the operating system is reloaded. Getting this process laid down and operating smoothly will be key to embracing the Windows 10 updating model and to providing quick and easy access to new operating system features as they arrive.