Windows 10 requires new levels of management tools and deployment practices to fully manage it. As discussed in the previous SCCM 2016 article, the ability of Windows 10 to run across so many device types necessitates these new forms of control. The evolution of deployment is clearly visible with the updated release of the Assessment and Deployment Kit (ADK) for Windows 10. The Windows 10 ADK continues to grow in scope as it incorporates these new deployment tools.

The major new addition in this release is the Windows Imaging and Configuration Designer (ICD) tool. ICD provides a smooth way to customize and roll out a Windows image across a variety of device types. It is not a replacement for MDT or the SCCM operating system deployment model. Rather, it provides a way to provision an image that does not fit neatly into the wipe-and-replace mode of deployment.

Using provisioning packages, administrators can customize a new desktop or mobile device quicker than they can create and modify a traditional task sequence. ICD is aimed toward System Builders, small organizations, or organizations wanting more control over BYOD environments. For a full tutorial of the Windows Imaging and Configuration Designer tool, check out this series. 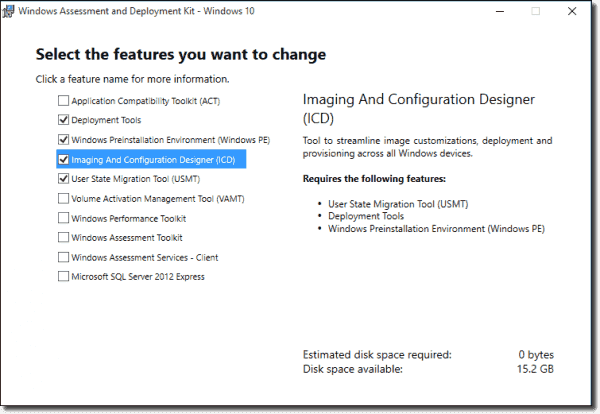 Windows 10 includes a reworked push-button reset feature (made possible in ADK). First introduced in Windows 8, push-button reset now allows for full image-less recovery of the machine. Windows 10 ADK makes recovering to an updated state possible. When a recovery is initiated, the OS and installed drivers can be restored to the most recent updated version of those files. This means that a recovered machine no longer has to install 100 additional updates on the next reboot!

Similar to the WIMBoot feature that was announced last year, Windows can now run from directly compressed versions of OS-level files. This allows Windows to install on even smaller hard drives. Amazingly, Windows installed with this method requires just 3 GB of space to operate in.

DISM has been updated with other new features. For starters, DISM can now capture in Full Flash Update (FFU) mode. This mode allows for Windows Phone deployments with this DISM architecture. Suffice to say, this still blows my mind. Package types in DISM have also been modified to allow components and languages to be installed without the need to specify a version. Finally, DISM is aware of multiple installation sources (for example, alternative source location when installing Server features). DISM can search Windows Update, a WIM, or an SXS source share within the same command.

The download for Windows 10 ADK has been brought over to the MSDN Hardware Dev Center. You can grab the online ADK setup from here. After you launch it, you can stream and install the desired components on a single computer. For future deployment, you can download the packages to a UNC. The entire installation weighs more than 6 GB. 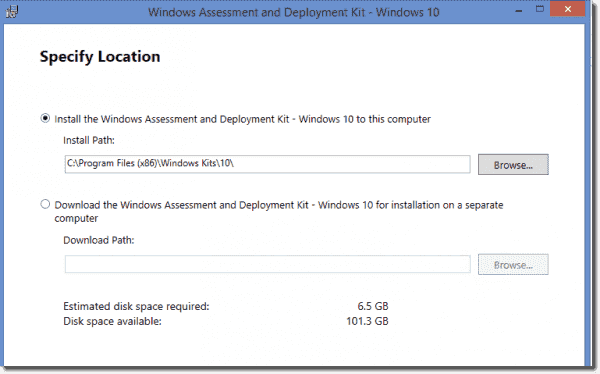 Installing Windows 10 ADK on a single computer vs. future deployments

Installing the Windows 10 ADK manually might be fine on just a few machines. Handling more than a couple, however, means you should probably deploy it instead. Launch the ADK Setup (download link) and download the source files for any component you need. Save these files on a sources/software distribution share. Ensure that the objects receiving this deployment have read/execute permission on the share and folder ACLs.

The Windows 10 ADK is setup-driven. Though it does contain unique MSIs for each feature, the installation process must initiate from adksetup.exe. The setup can be deployed quietly. Group Policy Scripts, SCCM, or other deployment applications should have no problems handling the installation. 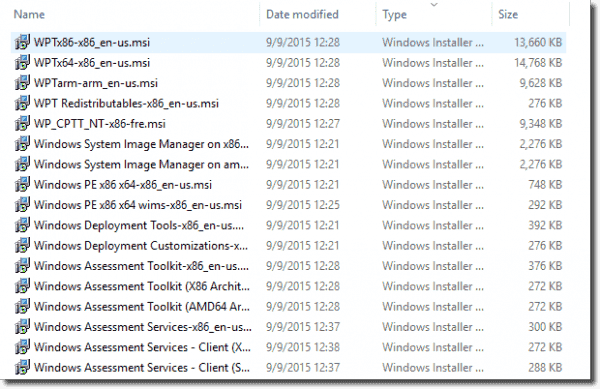 Decide on the list of features that you would like to install, as these will be added parameters to ADK Setup. You can run adksetup.exe /list to see the feature names. The command below will install the Deployment Tools, Windows PE, USMT, and ICD. Note that a space is required between each feature name.

You can now use your preferred deployment method to distribute the ADK. In SCCM, I validate the installation by checking the MSI GUIDs of my installed features. Of course, you can deploy this installer as a prerequisite for your MDT 2013 Update 1 installations.

Several critical issues have emerged around the Windows 10 ADK installation. The most notable is when an administrator attempts to remove the prior Windows ADK version. The reported error is ADK Uninstall did not complete successfully. Could not acquire privileges.

Fixing this issue is quite simple. The account uninstalling the ADK should have equal or greater privileges as the account that installed it. For example, attempt the uninstall as the local administrator of the machine. If you are unable to do this (or still experience this issue), run PsExec.exe with the -S parameter. This allows you to run the adksetup.exe /uninstall command under the System account.

The Windows 10 ADK continues Microsoft’s vision of a single OS across platforms. It enables robust deployments and varied installations. With these additions, Windows 10 is deployable to nearly any environment.