Windows 10 2004: The most important new features for professional users

Wolfgang Sommergut  Mon, Jun 1 2020Mon, Jun 1 2020  deployment, linux, windows 10  0
While Windows 10 1909 included few innovations, the 2004 release offers some new features. These include the Windows Subsystem for Linux 2 and the previously available Edge Chromium browser. In addition, there are also changes with setup and delivery optimization.

In its release cycles, Microsoft alternates between releasing versions with a larger number of innovations in the first half of the year and releasing minor changes in the second half of the year. The latter receive 30 months of support for the Enterprise Edition, while those from the first six months receive only 18 months.

Windows 10 2004 offers many changes, most of which are improvements to existing features. The major innovations are essentially limited to the Windows Subsystem for Linux 2 (WSL 2) and the integration of the Chromium-based Edge Browser.

Compared to the first version, WSL 2 is largely a new development. Similar to the Sandbox, Application Guard, or Credential Guard, it uses a lightweight virtual machine that you don't have to set up manually and that doesn't require the explicit installation of Hyper-V (see: Install Subsystem for Linux 2 (WSL 2) on Windows 10 2004).

This VM runs a Linux kernel. Thus, Microsoft no longer needs a hybrid file system in WSL 2, but uses a native EXT4 within the VHDX instead. Another improvement of the new architecture is that Windows programs, such as the File Explorer, are now able to access the Linux file system. 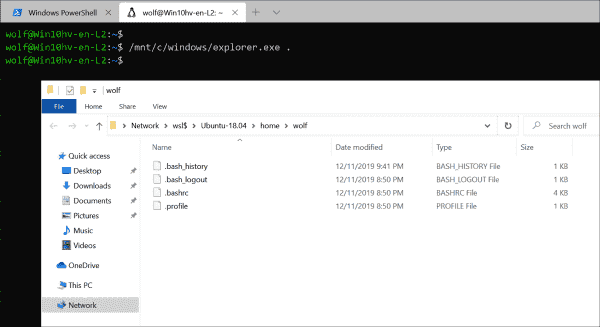 Accessing files stored in the Linux filesystem from the Windows Explorer

A further integration of the two worlds allows services within WSL 2 to be accessed from Windows via localhost. For example, you can request a page from a web server running under Linux using a Windows browser by referring to http://localhost.

At the Build Conference, Microsoft announced that a future version of WSL will support graphical Linux applications as well as DirectX.

With the discontinuation of its own browser engine, Microsoft switched to Chromium and thus back to a conventional Win32 program. The first generation of Edge was still a UWP app that only ran on Windows 10.

The new browser, however, is available for all versions of Windows, including Windows Server (Core). This decoupling from the OS enabled Microsoft to release the Chromium-based Edge in January, independent of any new release of the operating system. 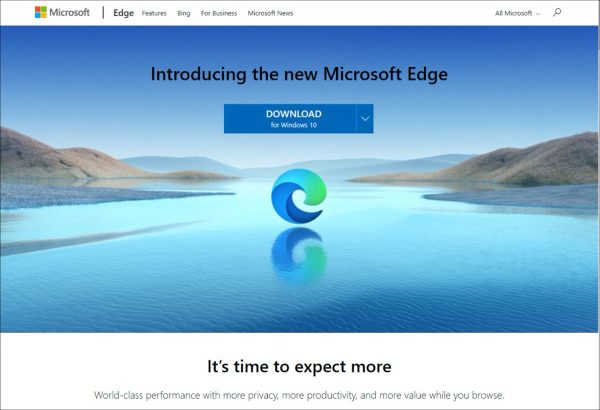 However, Windows 10 2004 still has the old version on board, which opens the download page for Edge Chromium when you first start it up. As of now, the market share of the new Microsoft browser is in the single-digit range, but this could increase in the future if no separate download is required.

To achieve the desired acceptance rate in enterprises, Microsoft allows Edge to be managed centrally via Group Policies and WSUS.

With Windows 10 2004, you can run the Chromium-based browser in the sandboxed environment of Application Guard. This feature now also benefits the Microsoft 365 Apps for enterprise if users are assigned a Microsoft 365 (Security) E5 license.

If you launch upgrades via setup.exe, three new values, ​​NoDrivers, NoLCU, and NoDriversNoLCU, are now available for the /DynamicUpdate parameter. This allows you to restrict dynamic updates so that drivers or the last cumulative update are skipped; the last value causes both to be skipped.

Another new option splits the installation into two phases. With the /skipfinalize switch, you can start the setup on the previous version of Windows so that it performs all tasks before the required reboot. The remaining part of the update can then be triggered with the /finalize parameter.

With Windows 10 1903, Microsoft introduced reserved storage to ensure that sufficient disk space is available for updates. You can now check whether this is activated with

To activate it, enter the following command:

You can turn it off again using State:Disabled. 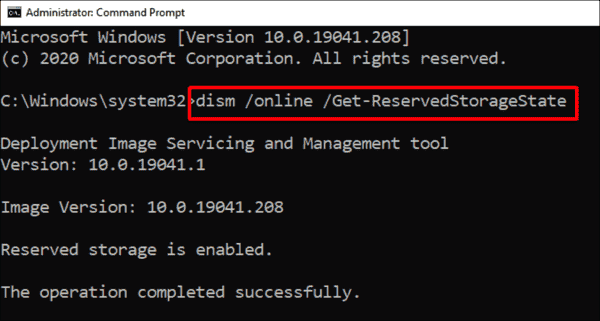 Reset the PC from the cloud ^

Windows 10 has always allowed resetting the operating system to the defaults. For this purpose, Microsoft uses the Windows files that exist locally. This process removes the installed applications and, optionally, the user data. 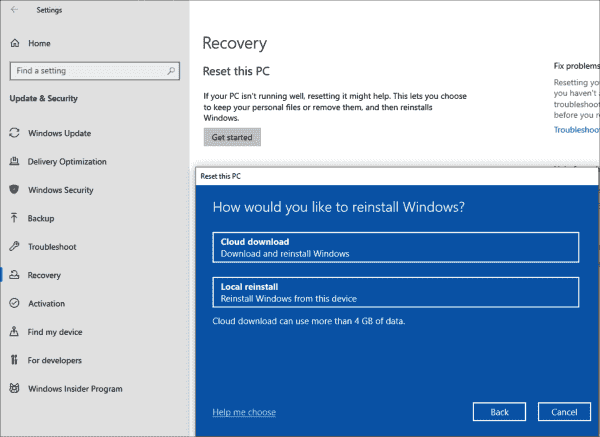 Version 2004 includes the option to download the operating system files from the internet instead. In this way, the OS can be restored if, for example, individual system files on the computer become corrupt.

Delivery Optimization (DO) is a component of Windows Update for Business (WUfB) and serves to reduce the data volume when updates are downloaded. To do this, it uses computers in the local network as a cache.

In a recently published white paper, Microsoft announced that it intends to favor WUfB over WSUS, which means that delivery optimization will become more important. Especially in companies with multiple locations that are connected via slow networks, admins often control update traffic with connected WSUS servers and distribution rings.

DO has already offered some settings for this purpose, but they were not sufficient to prevent such networks from being overloaded. Following customer feedback, Microsoft now allows an absolute maximum value in Mbps that may be used for the transfer of updates. 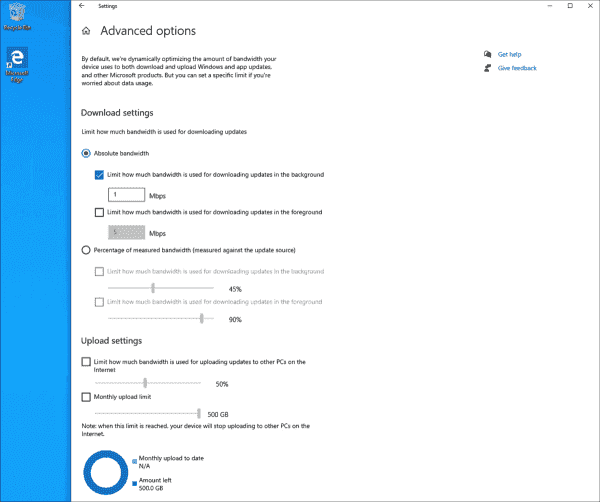 More information in the Task Manager ^

Microsoft has extended the Task Manager to provide additional hardware information. For example, it now displays the temperature of the GPU if the computer has its own graphics card.

On the Performance tab, you can also find out which type of drive the computer has (HDD or SSD). However, the tool doesn't detect the actual hardware when running in a virtual machine. 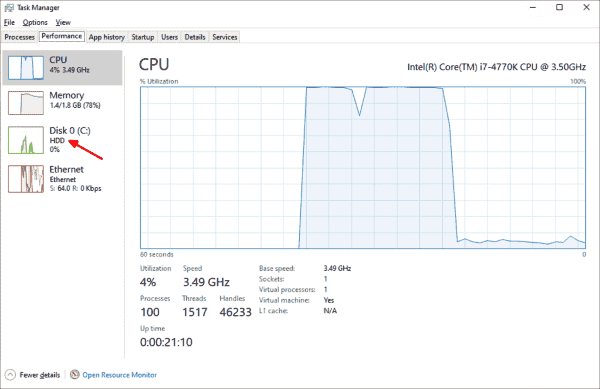 Changes in the settings app ^

Windows 10 2004 still doesn't complete the migration from the control panel to the settings app. Several links in the app still open old dialogs. As a new feature, the speed of the mouse cursor can now be adjusted in the app.

Microsoft redesigns some pages of the settings app with almost every update; this time, the update affects the configuration of the network. It also shows the data usage for the individual connections; the network profiles are located in the advanced options. 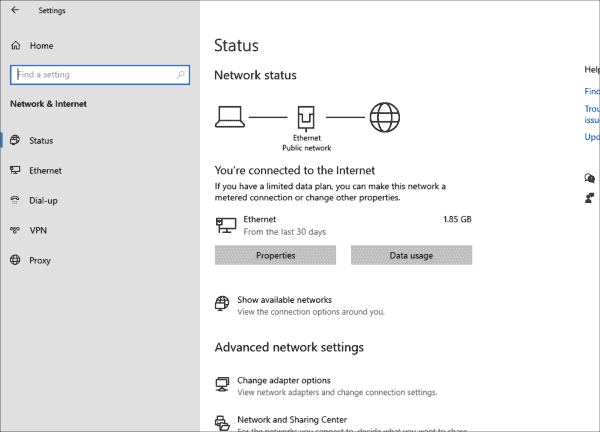 The newly designed page for network configuration in the settings app

After rebooting, Windows 10 restarts the applications that were last executed. This no longer applies only to Win32 programs, but also to most store apps. In addition, this feature can be explicitly switched on and off under Accounts > Sign-in options as of release 2004. 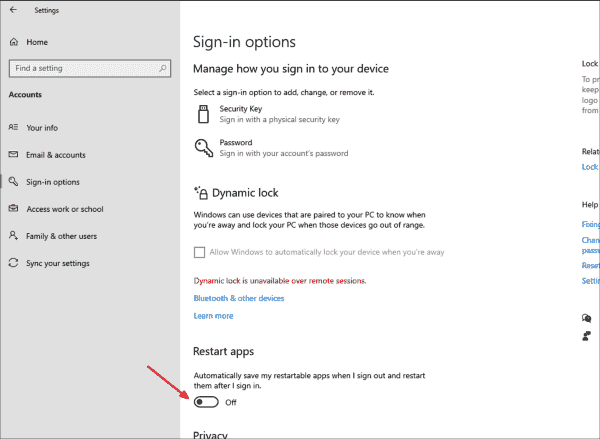 Overall, the app plays a minor role in system administration because it cannot be executed with administrative rights in a standard user session.

Windows 10 2004 brings a number of minor changes, which are mostly not very significant for professional environments: 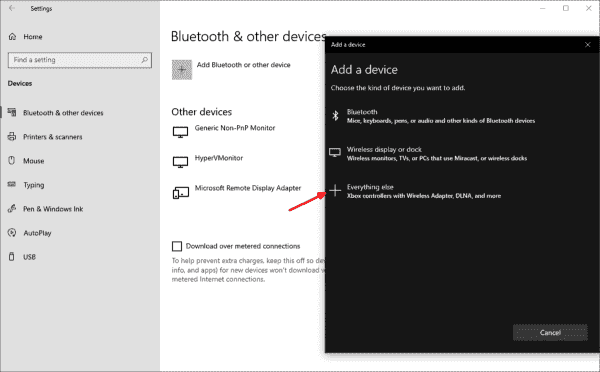 Windows 10 2004 automatically searches for compatible cameras on the network

The most striking new features of Windows 10 2004 are the integration of the Edge Chromium Browser (e.g. with Application Guard) and the completely revised subsystem for Linux. For OS deployment, this release brings new setup options.

The management of updates benefits from additional settings for delivery optimization and the possibility of activating and deactivating the reserved storage.

Many of the minor changes (cloud reset, redesigned pages in the settings app) can be useful in individual cases, but they play a minor role in managed environments.