Will the surprising success of Windows 8.1 make Microsoft rethink Windows 10?

Michael Pietroforte  Wed, Nov 5 2014Wed, Nov 5 2014  microsoft, windows 10, windows 8.1  12
According to Net Applications and to the surprise of many experts, the market share of Windows 8.1 rose by a whopping 4.25 percent in just one month. For me, this shows that patience and persistence are needed if you want to replace an established technology.

Many news sites claim that Windows 8.1 growth was caused by users who moved from Windows XP to Windows 8.1. In my view, this interpretation can’t be justified by the data. You would get the same market shares if all those new Windows 8.1 machines were former Windows 7 computers if you assume that the corresponding number of Windows XP machines have been updated to Windows 7. Of course, Windows 7 still the most dominating desktop operating system. 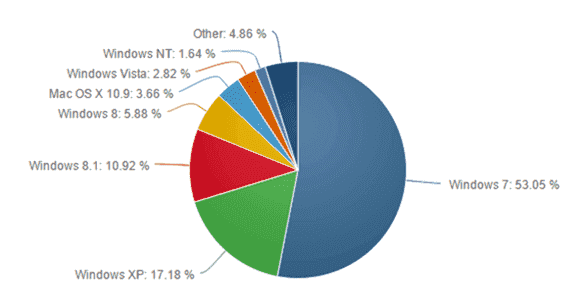 Market shares of Windows versions according to Net Applications

Nevertheless, what counts is that the Windows 8.x market share is now growing rapidly. This shows me that customers are getting used to the new UI. Man is a creature of habit. If you want to replace one habit with another, no matter how superior the new habit is, you need patience and persistence.

In the past, these were fundamental traits of the Redmond software giant. I have no statistical data, but I am pretty sure that a scientific analysis of Microsoft’s product introductions would reveal that the first version almost always fails. Windows Vista and Windows 8 are only the most prominent examples. Microsoft’s strength has been to not let itself be intimidated by those failures and, instead, persistently improve the product until customers finally accept it.

Whereas many believe that improvements are the main reason for the eventual success of a previous failure, in my view, in most cases it just took some time until customers got used to the new concepts. Windows Vista is the best example. Windows 7 essentially is Windows Vista a few years later. The changes that Microsoft introduced in Windows 7 are almost negligible. I think Joe Belfiore (corporate Vice President, Operating Systems Group at Microsoft) is right when he says that the main problem about Windows 8 was that the ecosystem just needs some time to adapt to a new OS.

Another trend I find interesting is that the growth in tablet shipments is slowing down. A growth of 11.5 percent is still a lot. However, considering the fact that tablet sales will represent less than 10 percent of all devices in 2014 and PC shipments grow as well, it is safe to say that all this babbling about the post-PC age was hopelessly exaggerated. Obviously, many tablet users found out, in the meantime, that a tablet can’t replace a PC.

In way, we can now say that a post-iPad page has been rung in. It is not just that the iPad and the iPhone are constantly losing market share to Android which has now arrived at 12.3%. (My guess is that the iOS market share will drop below 10 percent during the holiday season.) What I find interesting is that, according to a new study by J.D. Power, Apple lost the first rank in tablet customer satisfaction to Amazon. The value of the Apple brand still depends very much on the innovations of the Jobs era.

The Jobs successor, Tim Cook, is doing exactly what Jobs had been criticizing about the PC industry. New devices are just faster and bigger. Even worse is that Apple has now started copying Samsung by releasing an iPhone that looks a lot like the Note 3. That Tim Cook is proud to be gay is very "interesting." However, for Apple, it would be much better if its CEO could be proud to drive innovation in the computer industry.

What does this all mean for Windows? There is no such thing as a post-PC age, and Microsoft can stop worrying that Windows will become obsolete. The strong growth of Windows 8.1 underpins this. As long as Google sticks to Chrome OS and doesn’t aggressively push Android on the PC, Windows is not in danger.

However, if Microsoft wants to reach a market share in the tablet market that is worth mentioning, the company should not let itself be intimidated by complaints from users who refuse to give up old habits. If Microsoft keeps pushing the modern UI, customers will eventually get used to it. “Sow an act, and you reap a habit” (Samuel Smiles). Redmond just has to be patient enough and not trample over the tiny but rapidly growing Windows 8 plant with a Windows 10 that looks very much like the withered Windows 95.