Michael Pietroforte  Tue, Dec 18 2018Tue, Dec 18 2018  deployment, patch management, windows  31
Tim, I couldn't agree more. This extreme unreliability and these constant highly disrupting forced updates are the main reasons I broke with Windows. Under these conditions, I can't imagine ever working again with Windows on my own production system. This is sad to say for someone who has been a Microsoft fan boy since the early days of MS DOS and who has received 9 Windows MVP awards.

The fact that Microsoft uses customers as guinea pigs to test software is outrageous. The entire Windows Insider program is a joke. Microsoft abuses the pride of IT pros, calling them "insiders" to work for Microsoft without paying them.

Just look at the diagram below. How can Microsoft call a deployment to hundreds of millions of users a "pilot"? 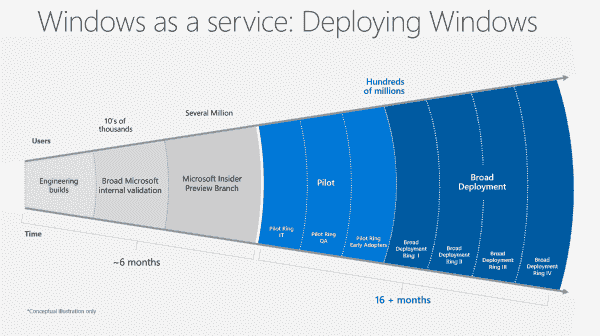 Customers as guinea pigs: Windows as a service: (with "courtesy" from Microsoft)

What makes things worse is that many third-party software makers for Windows have adopted this strategy. The entire Windows ecosystem has changed for the worse since Microsoft chose this low-quality path.

It is fascinating to see that it works the other way around in the Apple world. Updates are relatively rare because Apple takes quality serious and ensures that software works from the beginning and not just after the third or fourth update as it is now the case with Windows. And It is not just that Apple's own operating systems and applications are a couple of magnitudes more reliable and thought-through than Microsoft's.

Third-party software makers for macOS have adopted this high-quality model because they know that Apple customers wouldn't accept anything else. What surprised me the most when I moved from Windows to macOS a couple of years ago is that third-party software is more advanced, thought-through and most importantly much more reliable in the Mac ecosystem. The main reason why I now work on a Mac is software, not hardware. I don't exaggerate when I say that my productivity has been boosted and my user experience skyrocket by dumping Windows (and recently Outlook for the same reasons.) Quality is of tantamount importance when it comes to the tools you use at work, no matter if you are workman, an office worker or an IT pro.

I have been wondering for quite a while why Microsoft is desperately pushes untested updates on customer PCs. I think the main reason is that Nadella and high-ranking managers worry very much about Windows adoption. Ever since the release of Windows Vista, many consumers and businesses very reluctantly adopted new Windows versions. The solution was simply to force upgrades and updates on customers, thus creating Windows as a service.

This puts high pressure on engineers because it forces them constantly to release new updates at a high pace to justify the service model. The results are half-baked new features nobody really needs and a highly unstable operating system. The main reason Nadella had to significantly reduce quality control that Tim mentioned is because quality control slows down the update pace.

The main advantage for Nadella and his Windows managers is that they no longer have to prove their performance because there are no new Windows versions anymore, so Microsoft's customers can't vote with their purchases. However, the long-term effects for Windows are devastating. Without real feedback in terms of sales numbers tied to innovation of concrete new releases, the Windows platform will get weaker and weaker.

It is only a matter of time until a competitor will exploit this weakness and seriously challenge Windows on the desktop. Microsoft was once the undisputed king in the OS market. Since 2015, Microsoft is with Windows only third behind Google and Apple in terms of device shipments. This shows that wrong strategic decisions at the top can break a monopoly. If this doesn't encourage Microsoft's competitors, I don't know what will.