What’s new in VMware virtual hardware 15 and vSphere 6.7 U2

It's quite unusual to see the release of a new virtual hardware version with a version of vSphere that is not major but only an "Update 2." I think it's the first time in VMware's history.

Note that vmx-15 will only work on vSphere 6.7 U2 (and higher), so if you're running a lower version of vSphere, you won't be able to take advantage of the improvements present in this version. Even vSphere 6.7 GA or 6.7 U1 won't be able to power on virtual machines (VMs) configured with this virtual hardware version.

We detailed the specs for virtual hardware 14 (vmx-14) a few months ago here: New in virtual machine hardware version 14. Compared to vmx-14, vmx-15 adds only a few new features.

The table below gives an overview of support for different virtual hardware versions on different versions of vSphere. 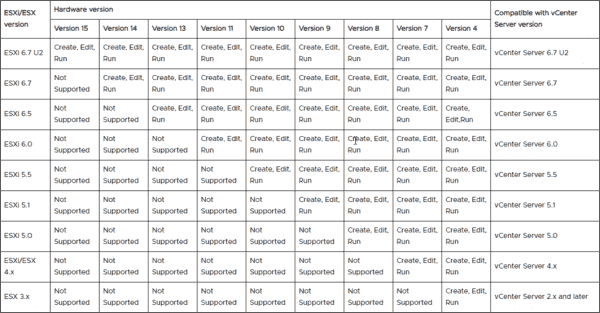 However, the strange thing is that when creating new VMs using the vSphere Client in vSphere 6.7 U2, vmx-14 is still the default version by default. But we can change this default behavior, and later in the article we'll show you how.

Now let's focus on some other enhancements found in ESXi 6.7 U2 that might be of interest.

Where to check for the virtual hardware version ^

You might ask, where can I check my VMs from a central location to see which version of virtual hardware they run? Let's have a look.

Connect to your vSphere infrastructure via the vSphere Web Client. Then select your cluster (or host) and go to VMs. Click the signto expand them and then click Show/Hide Columns. Check the Compatibilitycheckbox to add this as a new column. 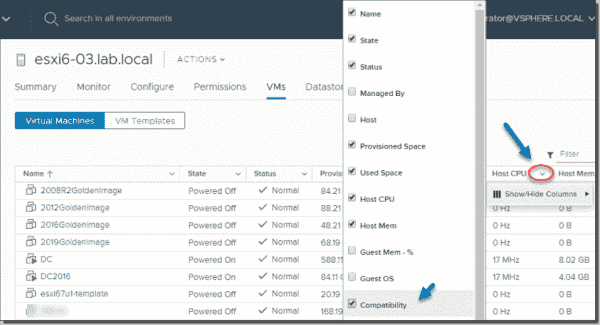 You can then drag this column to the left side for your convenience. Sort the VM hardware compatibility from the oldest to the youngest version to see which VMs might be running obsolete virtual hardware.

You can do this at the host or cluster level or at the data center level. Now if you run several clusters with different hardware, you'll need to do it on per-cluster basis.

In this case, simply right-clickyour cluster and change the setting at the cluster level. 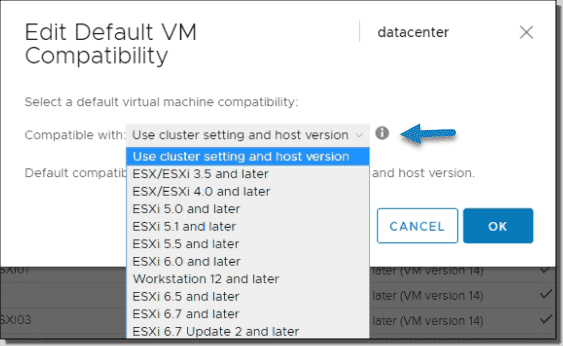 Change the default to the version you need

You should consider a few conditions. For setting the default compatibility on the cluster, the cluster must contain hosts that are connected and not in maintenance mode.

Also, bear in mind that the default compatibility setting on the host overrides a default cluster or data center setting.

As you can see, there is only a minimum difference between version 14 and 15, but when you're running some VMs on older virtual hardware and your underlying infrastructure changes drastically (such as for NVMe flash), you can benefit from the new features added in v14.