Kyle Beckman  Thu, May 28 2015Sat, May 28 2016  nano server, windows server, windows server 2016  7
After some delays, Microsoft has unveiled the latest preview for Windows Server 2016, Technical Preview 2. This release is starting to take shape and should give us a good idea of the direction Microsoft is going with Windows Server. In this article, I’ll cover some of the new features in Technical Preview 2.

Say goodbye to the GUI (by default) ^ 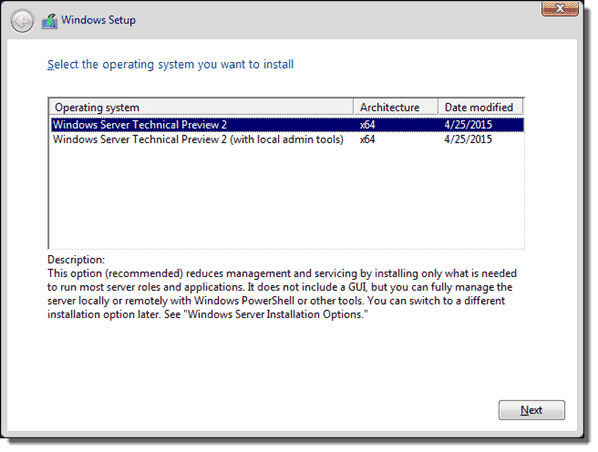 Just to show you how seriously hardcore Microsoft is about killing the GUI on servers, even the Control+Alt+Delete prompt is in a command prompt window. 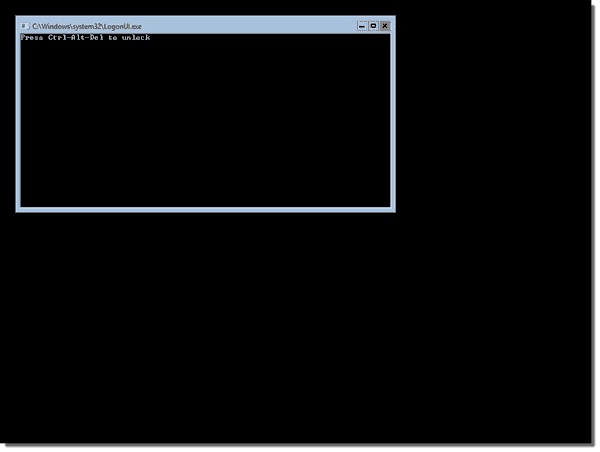 The good news is that you can still enable the GUI via PowerShell if you have applications that need features of the GUI.

Another new feature of Windows Server that was demonstrated at Microsoft Build 2015 is Nano Server. Nano Server is a stripped-down version of Windows Server that is 20 times smaller than Server Core. Because it is running only the most essential services, reboots (which are much faster) are decreased by 80% and there are 92% fewer critical updates necessary. This does come at a cost: Nano doesn’t include local console access, which means management has to be performed via PowerShell or WMI. It also doesn’t include support for installing software via MSI or support for 32-bit applications through WOW64.

Nano is currently limited to be used as a host OS for running cloud workloads as a Hyper-V host, as a host to run Scale-Out File Server, or for deploying cloud-based applications. Additionally, Nano isn’t currently available when running a manual installation of Windows Server. You’ll have to get the WIM file off the ISO and deploy it with your OSD solution. Paul will post a more detailed article about Nano Server in a couple of days

If you’re running Windows Server Failover Clusters for something like a Scale-Out File Server, Hyper-V, or any other clustered workload, you know how painful an upgrade can be when a new OS is released. Previously, nodes in the cluster had to be evicted and upgraded to the latest OS. After the upgrade, you would have to form a new cluster and then migrate services from the old Failover Cluster to the new Failover Cluster, which introduces the possibility of downtime while you had cluster nodes down.

The RDMA improvements in Server 2016 Technical Preview 2 reduces the number of NICs needed in Scale-Out File Servers from four to two. Previously, it was necessary to run dedicated NICs for your RDMA traffic. Now, that traffic can be on the same converged network as VM network traffic.

Server 2016 TP2 also includes functionality for hot adding and removing of memory and NICs, which reduces the number of maintenance events for simple hardware additions to VMs.

Storage QoS (Quality of Service) will allow administrators to control how virtual machines access storage. Doing so either ensures that VMs receive a minimum level of IOPS/access or prevents VMs from using more than their fair share of access to resources.

Server 2016 also includes improvements to storage path resiliency for VMs. This will allow VMs to better handle storage outages and failures by pausing and restarting gracefully.

Server 2016 also comes with a number of improvements to Hyper-V for organizations running their own on-premises cloud.

One of the complaints I hear a lot from IT pros in the IT community is that you can’t run Hyper-V inside of Hyper-V for lab and testing environments. Other products, such as VMware Workstation, support the functionally.

Windows Server 2016 now supports running nested Hyper-V. This functionality appears to be primarily aimed at organizations running containers, but it will be very helpful for IT organizations testing upgrades and other solutions.

Let’s all say it at the same time… FINALLY! Before Server 2016, the absence of a TPM made encrypting the boot drive (C:\ drive) of your servers unsupported in a virtual environment. Server 2016 includes support for adding a virtual TPM inside of virtual machines, which allows for support of encrypting BitLocker boot volumes on Windows Server VMs.

And this is just the tip of the iceberg! Windows Server 2016 Technical Preview 2 has many more enhancements and improvements. We’ll likely see a few more things added or updated for the final release late this year or early next year.

What about you? Are you looking forward to any other killer new features in Server 2016? Is anything missing? We’d love to hear what you think!