Parallels released version 16 of its Remote Application Server (RAS) in July 2017. The key idea behind RAS is that systems administrators can manage all of their application and desktop publishing needs from one place. Moreover, users can access these resources from their tablet devices or even their smartphones.

I covered RAS v15 thoroughly in a previous 4sysops article; you may want to check it out:

Today I will show you what's new in RAS v16. Let's get started!

RAS users can connect to hosted applications or desktops by using either a "thick" Parallels Client, or the Parallels HTML5 Client. In RAS v16, IT administrators can now apply corporate branding and other customizations to the HTML5 client.

Branding is a big deal for many businesses who want their services to reflect their own corporate "look and feel" instead of inundating their users with different vendor-specific user interfaces.

The next screenshot shows you how to get to the HTML5 client customization settings in the RAS Console: 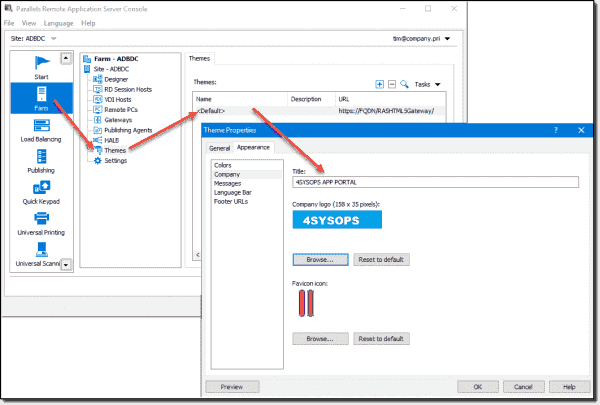 The next time users log into the Parallels HTML5 Client, they will see the customization. Here, let me show you: 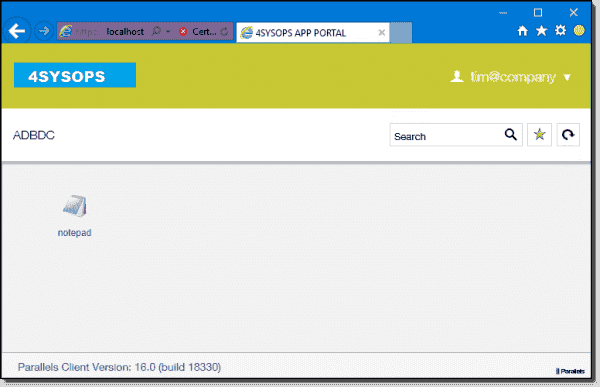 Virtual desktop infrastructure (VDI) helps businesses save money by centralizing desktop environments. In some ways VDI is a throwback to the original days of mainframe computing in which end users had nothing but a monitor, a keyboard, and a network connection on their side.

RAS v16 adds Nutanix Acropolis and Hewlett-Packard Enterprise (HPE) to its already robust list of supported hypervisors. You can see the list in the following screenshot: 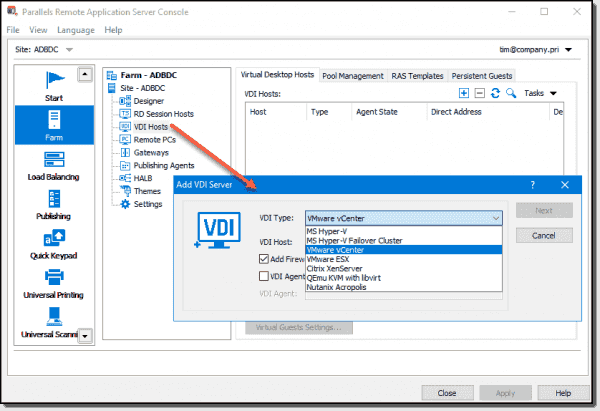 Adding a hypervisor to the RAS farm

RAS v16 generates VDI desktops on the fly and on demand by virtue of an intuitive, customizable template library.

Parallels Client for iOS and Android

As I stated earlier, one of RAS v16's value propositions is that a user should be able to access applications and virtual desktops from anywhere. Parallels HTML5 Client makes RAS v16 portable, and the updated iOS and Android applications take universality one step further.

I show you a couple screenshots from the Parallels Client running on an Apple iPhone. 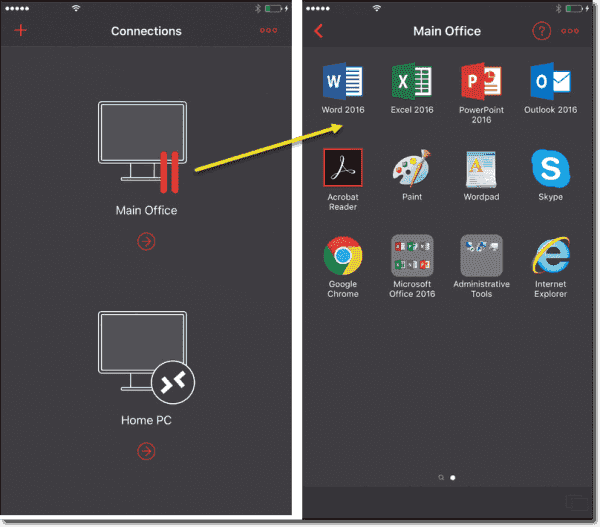 Parallels client on the iPhone

In addition, Parallels improved the usage of mobile devices by adding support for new input devices such as Quick Keypads and the Swiftpoint GT mouse.

Although RAS simplifies the process of publishing applications over your network and even the Internet, IT administrators are nonetheless required to lay the foundation for each application (preparing applications on a terminal server, for instance).

In RAS v16, we have native integration with Turbo.net. In case you've never heard of it, Turbo.net is an online repository allows the containerization and provisioning of applications.

What's different about Turbo.net is that all of its applications run as containers, or isolated instances with all dependencies stored within each container. Note that Turbo.net uses its own container engine; it does not use Docker.

The value proposition here is that it becomes a lot easier to discover apps to publish to your users. The following screenshot gives you a feel for the integration:

In 21st century IT, you won't get very far in your career as a Windows systems administrator unless you understand PowerShell. RAS v16 includes a binary module named PSAdmin that contains 110 cmdlets as of this writing.

As you can see in the following screenshot, the Parallels team took the time to document their commands—thanks for that!

To use the PSAdmin module, fire up an elevated PowerShell console and create a Parallels RAS session. Note: none of the commands work unless you've established a connection to your RAS server.

Let's check on the status of our RAS gateway:

In my lab environment, I published only one Remote Desktop Services (RDS) application. Let's check on that:

RAS v16's license works like any other software-as-a-service (SaaS) app. In other words, you pay for a one-, two-, or three-year subscription, with the license cost adjusted depending on your concurrent users.

RAS v16 is a really nice product because it centralizes disparate application and desktop publishing solutions in your enterprise into a so-called "single pane of glass." What's more is that Parallels obviously spent time making the product as easy to use as they could.

I would suggest you dive into the Parallels RAS documentation library to learn more.