What does the growth rate of Amazon’s cloud mean for IT pros?

Home Blog What does the growth rate of Amazon’s cloud mean for IT pros?

I think the vast majority of IT pros are still focused on conventional IT systems running on premises. Most companies are still brick-and-mortar businesses that keep on doing IT like it was done in the last 20 years or so. However, if you would conduct a survey among digital businesses, you would get a different picture. You will hardly find an Internet startup that is not running on AWS. This alone should make every IT pro sit up and take notice.

Internet startups consist mostly of techies who belong to the IT avant-garde. These are the guys who are not interested in continuing to do things like we always did them; they do things the way we all will do them in the future. And, even more important, they don’t report to managers who think of IT as a necessary evil. So they can use this kind of IT that is best for a growing business.

The only question is, how far in the future? I think a closer look at AWS’s growth rate can help here. Amazon is very secretive about numbers about its cloud business. The reason is obvious. They try to conceal how fast AWS is actually growing in an effort to avoid startling competitors. And this strategy has worked very well. While Ballmer was obsessed with Google as Microsoft’s main competitor, Amazon could silently build up a cloud monopoly. This is dangerous; whereas Google never was able to seriously threaten Microsoft’s core business, Amazon can. Amazon clearly targets the enterprise IT.

Lots of speculation is going on about the growth of Amazon’s cloud, and most of it is about revenues. I think those analysts miss the point, but let’s first see what data is available here. Amazon is recording AWS revenues under its “Other” category. If you look at the picture below, you get an idea of how fast AWS is growing in terms of revenue. 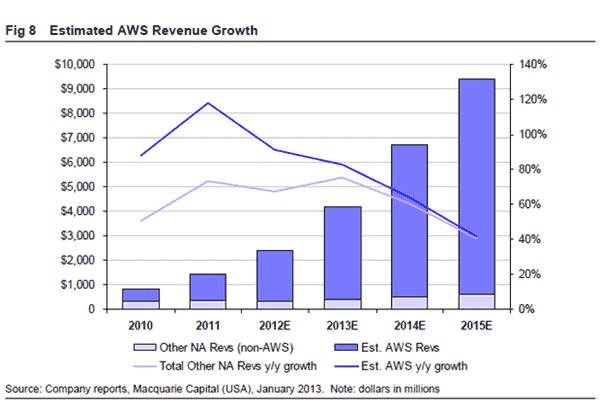 Thus, it is not the $3.8 billion (more recent estimates project $3.2 billion) in revenue in 2013 that should worry other cloud providers. What should scare them is the growth rate, combined with the fact that Amazon is now, by far, the biggest cloud provider.

As mentioned above, the revenues are not too interesting when it comes to estimating the impact on the future of IT. Considering that Amazon constantly reduces prices without real pressure from competitors, it appears revenues are not really what matters for them. Here are a few more technical numbers that help to estimate Amazon’s growth rate:

According to Netcraft, the number of hostnames, active sites, IP addresses, and computers in AWS grew exponentially since 2009. Note that the diagram below uses a logarithmic scale. 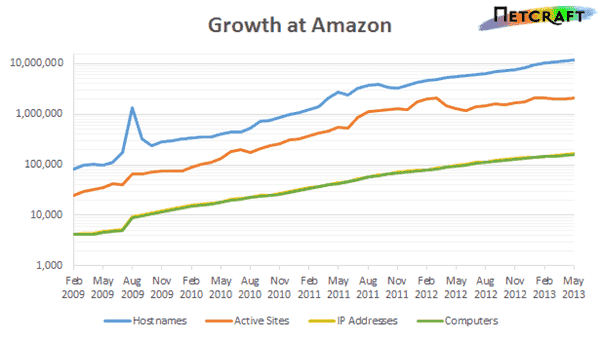 Although these numbers are certainly remarkable, there is another thing I find much more impressive. It is the pace at which Amazon adds new services and features to its cloud. If you look at this what’s new page, you will notice that Amazon adds new functionality to AWS almost daily.

While reading “The Everything Store: Jeff Bezos and the Age of Amazon” by Brad Stone (recommended), I began to understand why AWS is growing so much faster than all other cloud providers. The reason has a name: Jeff Bezos. Many old-school CEOs of other IT behemoths, most prominently Steve Ballmer, are mainly focused on their competitors. They only start changing things if certain business models have proven to be successful (search engines, gaming consoles, phones, tablets, you name it). This worked fine in the Gates era because the tech sector was changing at a comparably slow speed. Nowadays, if you are second, it is almost impossible to catch up even if you have billions of cash dollars in your bank accounts.

What is amazing about Amazon is that, even though it is a multibillion dollar business, it acts like a startup. Bezos is not afraid of doing things in a completely new way. Quite the opposite! Many of the new Amazon services and features have no counterpart in old-fashioned, on-premises IT and are not available at other cloud providers. Thus, it is not so much the growth in quantity that is decisive here; it is the progress in quality I find much more interesting.

In a way, Jeff Bezos’ attitude reminds me of Steve Jobs, who always tried to impress with new products nobody else has had in mind before. Steve Jobs didn’t listen to customers in order to find out what they want (like Ballmer); Jobs told them what they want, and many agreed with him. However, there is a big difference between Jeff Bezos and Steve Jobs. Jobs was only focused on the product. As long as the product was perfect, it didn’t really matter much if it was profitable.

Like Jobs, Bezos doesn’t care much about profits—probably not even about revenues. However, unlike Jobs, Bezos doesn’t seek the perfect product where everyone applauds and admires him for his prophetic gift. Bezos would say Amazon is customer-focused like no competitor. This might be true. However, happy customers are only the weapon with which Bezos targets his real aim. It appears to me Bezos only wants one thing. He wants BIG. Growth is all that really matters to him. Publicly, he might justify this by saying that a big Amazon has a better chance to make good profits in the long run.

However, I doubt that this is really his main motive. Billionaires seldom work like crazy to earn more money for themselves or for their shareholders. Jobs wanted to leave a dent in the universe. Bezos wants more. He wants to create a universe. Gates wanted a PC on every desktop. Bezos wants everyone on this planet to shop in his “everything” store, and he wants every company to run its IT on AWS. He probably got infected by the growth virus in Amazon’s early years, when the online bookshop was expanding beyond his own wildest dreams—which were already insanely optimistic. There is no doubt that he is now obsessed with growth.

It is his ability to convince others that growth is all that matters, combined with an inexhaustible source of ideas for how things can be done in a completely different way that will make it very difficult for all other cloud providers to keep up with Amazon’s pace. Whereas CEOs of Amazon’s competitors are mostly concerned about impressing shareholders with nice profits, Bezos doesn’t have to care much about such growth-impeding nuisances. Steve Ballmer is wrong when he says that Microsoft just needs a new CEO who can change things faster. If Microsoft wants to compete with Amazon’s cloud, it needs a real tech leader who is willing and able to create at the same speed as Bezos can. As a tech company, Microsoft really needs a super geek as CEO and not another "top manager."

What does this mean for the IT pro? Considering AWS’s growth rate, it is only a matter of time until its cloud will appear in front of your windows. Just as most IT pros have to know Windows nowadays, in the near future we probably all need to speak AWS fluently. What does “near future” mean? Perhaps three to five years, when the number of businesses that work with AWS approaches the number of Microsoft’s business clients.

Note that I am not saying that Microsoft is in serious trouble. Not in terms of profits. Microsoft's future as a cloud provider is in danger, yes. Nobody can reliably predict the outcome of this development. However, I believe that, in the future, much more Microsoft software will run in Amazon’s cloud than today. Microsoft might even benefit from Amazon’s growing cloud because it will create many new businesses with a growing appetite for IT. This is comparable to the effect that Microsoft immensely benefitted from Google’s search engine because many more people found PCs useful. All I am saying is that, at the moment, neither Microsoft nor any other cloud provider can keep up with the explosive growth of Amazon’s cloud. And this means that every IT pro who is serious about his or her career should get started now to learn AWS.

Do you agree? You think I exaggerate?