What are VMware vSphere 7 scalable shares?

Vladan Seget  Fri, Apr 24 2020Fri, Apr 24 2020  virtualization, vmware  0
VMware vSphere 7 has introduced a new feature called scalable shares, which solves a problem many IT admins have been facing. You can activate scalable shares at the cluster level or at the resource pool (RP) level.

When using RPs and when you have, for example, two different RPs in your cluster, each one has a different number of virtual machines (VMs). Each RP also has different shares configured. 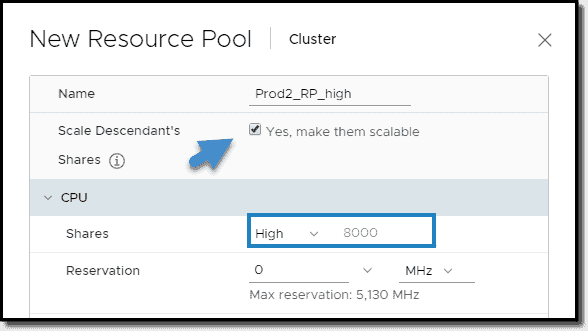 Scalable shares configuration within the RP in vSphere 7

As a result, when you divide the shares by the number of VMs per pool, you'll see that the normal RP has an advantage over the one configured with high shares. This is particularly true when the number of VMs in the high RP grows significantly. In our example, the RP has eight VMs.

Previously you'd have to adjust the RP settings to load-balance the resources accordingly. vSphere 7 and scalable shares will take care of it automatically.

Where do you activate VMware vSphere 7.0 scalable shares? ^

You can enable scalable shares in two different locations:

To enable scalable shares at the cluster level, simply select your cluster, Configure, and Edit.

Click the Additional Options tab and then check the Enable scalable shares for the resource pools on this cluster box.

To show you the option at the cluster level, check the image below.

Note: When you activate scalable shares at the cluster level, on each new RP you create, the checkbox will be activated by default (and grayed out so you won't be able to uncheck it). 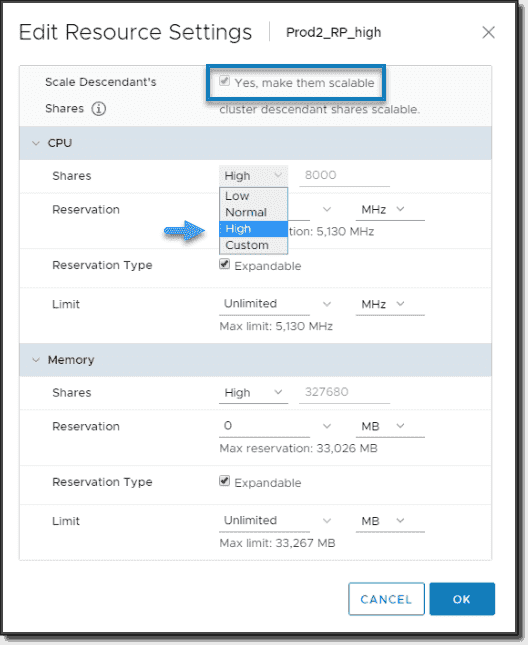 Resource Pool with high shares and the scalable option on

vSphere 7.0 has already improved DRS logic by accounting for the load on each VM in the cluster. It analyzes the execution efficiency of a VM and looks into CPU percent ready time, good CPU cache behavior, and memory swap. When the DRS score of such a VM gets worse on a particular host, DRS might consider migration to another host within the DRS cluster with more headroom.

Scalable shares also allow you to build an environment more balanced when it comes to resources assigned on a per-VM level.

Scalable shares allow RPs to have dynamic entitlement because every time the number of VMs per RP pool changes, the system will recalculate the resources to guarantee the resource entitlement.

If admins didn't recalculate the shares manually when adding or removing VMs, they most likely weren't using them they should, with poor results.

VMware vSphere 7.0 brought over 150 new features, as it is a major release from VMware. They released the 6.7 version on April 17, 2018 almost two years ago. So it was about time for VMware to come up with this new major vSphere version.