Michael Pietroforte  Fri, Jun 5 2015Fri, Jun 5 2015  android, monitoring  0
Watchdog Task Manager Lite is a free app for Android that warns you if an app’s CPU usage exceeds a certain threshold. Apps that consume too many CPU resources cause two problems: they drain your battery and they can slow down your phone.

You can easily identify apps that strain your battery over longer periods through the battery app in the Android settings (General tab on Android 4.4). The problem with this method is that it only works under normal circumstances when apps work properly. However, when an app that usually only requires a few resources crashes, it may suddenly consume large quantities of resources and deplete your battery quickly.

Sometimes you notice that an app has gone wild when your phone warms up in your pants pocket. Using your thigh’s temperature sensors is one way to monitor your Android apps; Watchdog Task Manager is another. And don’t worry, Watchdog won’t bite your leg; it only barks.

You know those dogs that bark all night because they observed a suspicious cat sneak into the garden? Watchdog also has such a persistent mode. In contrast to your neighbor’s dog, you can turn this feature off with a single tap. The app can also vibrate and blink, and you can configure your favorite bark tone—all features that your neighbor’s dog lacks. 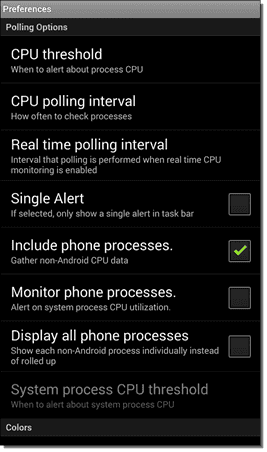 The app also lets you set a suspicion level—that is, a CPU threshold and a polling interval. Don’t set the polling interval too short; if you do, Watchdog will slurp up all the juice from your battery. This is particularly true for real-time polling. 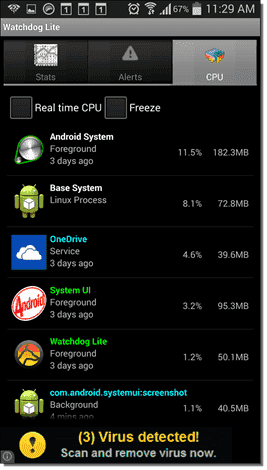 Real-time polling can be useful if you want to get an overview of the currently running apps on the task manager tab. You see the app’s CPU usage and its memory consumption. If you tap an app, you can kill, launch, or whitelist it. 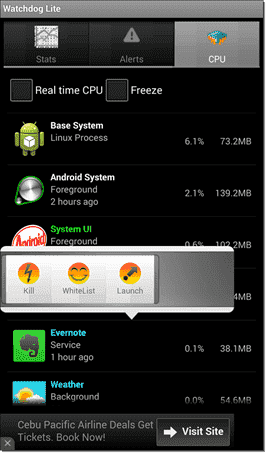 Watchdog considers whitelisted apps as friends and won’t bark at them. (I haven’t seen Watchdog wagging its tail, though.) The paid version ($3.49) also supports blacklists. Blacklists are useful for constantly misbehaving apps. If such an app reaches the configured CPU threshold, Watchdog will kill it. (Yeah, Watchdoggy can be a real beast.) The paid version also frees the app from ads. 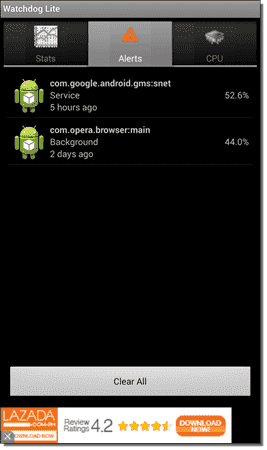 When you switch Watchdog to silent mode, you can still review apps that have been misbehaving lately on the Alerts tab. Watchdog can also add alerts to your Android notification panel. The Stats tab gives you an overview of your phone’s overall CPU usage since the last collection. 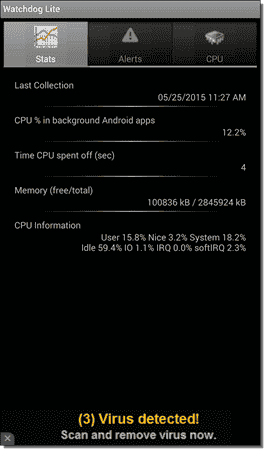