Joseph Moody  Thu, Dec 10 2015Wed, Feb 17 2016  deployment, patch management, wsus  16
Microsoft released KB 3095113 to enable future Windows 10 feature upgrades. Whether you will deploy upgrades or not, you need to know what this hotfix does and how not applying it can break WSUS.

Update: We have a new post about the broken Windows 10 upgrade classification.

Windows 10 completely changed the traditional wipe and reload method for OS upgrades by releasing regular feature upgrades. These upgrades are not your simple monthly updates or combined cumulative updates. Each new release brings new features, deeper management, and a new version number. In essence, the upgrades affect the entire OS build – not the individual components that normal updates apply to.

The first major update, Windows 10 1511, will be released to WSUS within two weeks. Deploying this update gives you an easy and automated way to take existing Windows 7, 8.1, and 10 clients to this latest OS build. To do this, though, your WSUS install will need to be patched with KB 3095113. Even if you don’t plan on deploying this upgrade, you will probably want to install this patch so that WSUS won’t break in the future. 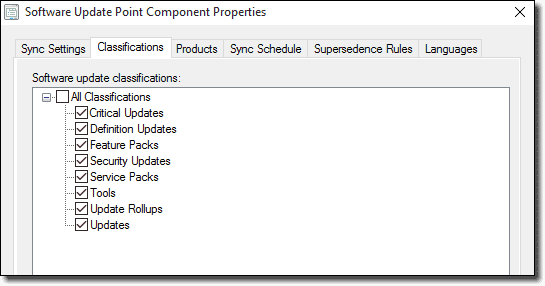 Windows 10 1511 and future upgrades rely on two core WSUS changes. The first change adds a new update content file type. The second change provides a new Upgrades WSUS classification. Both of these are handled by KB 3095113. While you read the rest of this guide, register and download the KB 3095113 hotfix here.

If you are running an earlier version of WSUS, you technically don’t have to worry about this, as Microsoft will not support these feature upgrades on those older WSUS versions. This lack of support includes SBS 2011. Regular patch Tuesday security updates (and the like) will still be deployable by these older versions of WSUS for the Windows 10 operating system.

As discussed above, KB 3095113 adds the components (and classification) needed to deploy future feature upgrades. To quote the WSUS product team blog, “WSUS [4.0] may be able to see the Windows 10 1511 feature upgrade even if it can’t properly download and deploy the associated packages.” 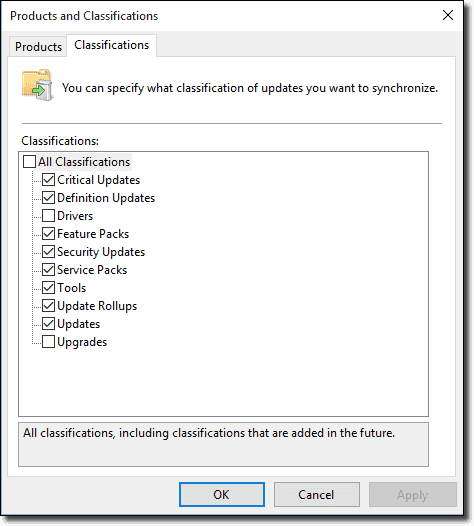 The Upgrades classification available in a patched WSUS 4.0

If a WSUS administrator checked the Upgrades classification under Product and Classifications without having this hotfix installed, the WSUS database would be populated with unusable data. In order to deploy upgrades in the future, this data would need to be removed. At the time of this writing, the steps for cleaning up this mess are not available from Microsoft.

Microsoft’s recommended guidance is that, if you ever intend to deploy Windows 10 and take advantage of these upgrades, you will have to install this patch first. Even though the update is a technically a hotfix, the WSUS team states, “We have tested it the same as we would any Windows Update release, so there is no reason to wait to install the update on your WSUS 4.0 servers.” Personally, I would install it regardless of current Windows 10 deployment plans. This bit of prevention can save you a headache later. If you still haven’t downloaded the hotfix, you can do so here.

What do you think of the Microsoft OS upgrade plan? Will you be installing this hotfix and deploying Windows 10 1511?

Update: We have a new post about the broken Windows 10 upgrade classification.