Every storage technology area has seen improvements with the VMware vSphere 7.0 Update 2 release. The detailed list of storage improvements comprises the following:

Let's detail a few of the more notable storage improvements in the list above and see how they have been implemented in VMware vSphere 7.0 Update 2.

One enhancement in traditional storage is the increased iSCSI path limit. Traditionally, VMware has supported eight iSCSI paths, far short of the Fibre Channel support of 32 paths. Many customers have found this to be quite limiting in several use cases, especially when multiple storage arrays are involved or configurations are stretched.

VMware has now officially bumped the supported iSCSI path limit to 32. This increase effectively gives customers much more flexibility in the number of iSCSI connections from vSphere clusters, which finally allows supported configurations up to the new 32-path limit.

The new VMFS snapshot improvements found in vSphere 7.0 Update 2 are interesting as well. VMware has made changes to how reads that come into a virtual machine with snapshots occur; these changes significantly improve the efficiency of this process. Before the vSphere 7.0 Update 2 release, reads had to traverse the snapshot chain and then arrive at the base disk. A special filter now redirects reads to either the existing snapshot chain or the base disk, eliminating the need for reads to traverse the entire chain. This improvement helps to eliminate read I/O latency for VMs running snapshots.

Traditional storage using NFS has also been improved with vSphere 7.0 Update 2. With the release, VMware has added NFS array-based snapshots of entire, non-cloned VMs and prevents using the redo logs by offloading this process to the NFS array's snapshot technology.

VMware vVOLs is the way forward for traditional storage arrays. VMware has fully embraced moving forward with vVOLs, as has been shown by how vVOLs is now the standard for traditional storage with VMware Cloud Foundation. VMware vSphere 7.0 Update 2 offers many notable vVOLs capabilities. VMware continues to enhance the capabilities of vVOLs with a higher queue depth for protocol endpoints in this release. The minimum queue depth is now configured by default at 256, or the maximum queue depth of the exposed LUN.

Another new enhancement is that the config vVOL has been increased from the default 4 GB in size. This new enhancement will provide new opportunities for OEM vendors to store images for builds and other purposes. With cloud-native technologies, VMware allows persistent volumes to be created as what is referred to as first-class disks. These disks are independent of virtual machines. New with vSphere 7.0 Update 2, VMware has introduced the ability to create up to 32 snapshots on these independent disks. It will open up many possibilities for creating snapshots of Kubernetes cluster persistent disks. Another new feature with vVOLs and vSphere 7.0 Update 2 is the ability to see which vVOLs are associated with each persistent volume. This gives administrators much better visibility to see this association at a glance.

There are two new features in vSAN that are certainly worth noting with the vSphere 7.0 Update 2 release. One is a feature that has been a long time coming—RDMA support with vSAN. We have been hearing a lot about RDMA for the past few years. What is it? RDMA stands for Remote Direct Memory Access. When it comes to storage, it allows for much better performance with storage devices. It enables nodes to talk directly to memory and drastically simplifies the data path. It eliminates the need to involve the processor, operating system, or other hardware in the mix. It results in much lower latency, better throughput, and performance gains. 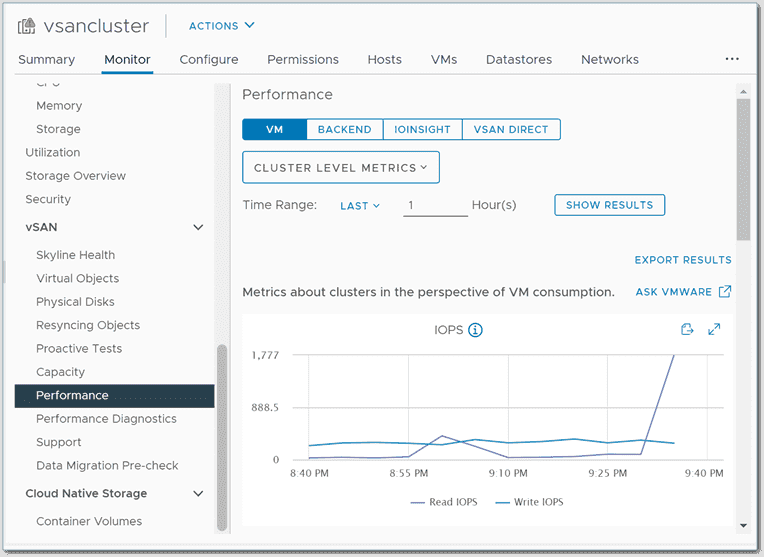 VMware vSAN 7.0 Update 2 allows the use of clusters configured for RDMA networking using the RoCE v2 protocol. RoCE is RDMA over Converged Ethernet. It is a standard by which RDMA can traverse Ethernet networks and allow transport offload with hardware-based RDMA implementations. It results in superior performance for vSAN 7.0 Update 2.

VMware has also done quite a bit of performance tuning with RAID 5/6 erasure coding in vSphere 7.0 Update 2. Improvements have been made with RAID 5/6 erasure coding to reduce the amount of CPU utilization. In conjunction with these improvements, vSAN 7.0 Update 2 also includes further enhancements to allow better parallelization, as I/Os are committed to the cache tier. This leads to better overall performance and fewer bottlenecks in the storage I/O path.

There are many great new features and enhancements with VMware vSphere 7.0 Update 2. As discussed, this is undoubtedly true in the area of storage capabilities and performance. VMware has put a lot of effort into improving storage performance and scalability in this release across all storage areas. It includes traditional storage technologies, including vVOLs, as well as vSAN performance improvements and capabilities. For some who have been looking for the release to upgrade to vSphere 7.0, the Update 2 release certainly offers excellent new features and capabilities, especially in the realm of storage.