Vladan Seget  Tue, Mar 10 2020Tue, Mar 10 2020  virtualization, vmware  1
VMware vSphere 7.0 has been announced, and it offers the new Virtual Hardware 17 (vmx-17). This virtual hardware configuration, available to the VMs running on vSphere 7.0, adds some additional capabilities, as is usually the case with major releases.
Contents

While we don't have precise information yet about scalability, to see whether there are any differences in vCPUs or vMemory compared to previous versions of Virtual Hardware, we have some news to share about what is new in vSphere 7.0's Virtual Hardware 17 as well as some news about the scalability of vCenter server 7.0

Here is an overview wizard that is used to create a new virtual machine (VM).

Let’s have a look at what’s new in Virtual Hardware 17.

Virtual Watchdog Timer – The new virtual hardware introduces the concept of a Virtual Watchdog Timer, which enables guest monitoring within clusters. Without a watchdog timer, there is no standard way to know whether the guest operating system (OS) and applications have crashed. This watchdog timer enables identifying the rest of the VMs if the guest OS is no longer responding. It is important for clustered applications, such as databases or file systems. 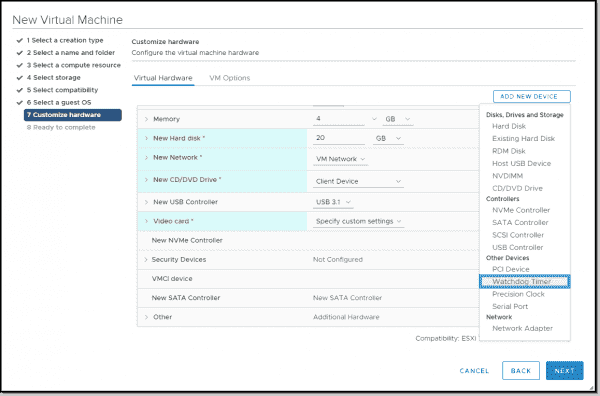 Precision Time Protocol (PTP) – This feature in Virtual Hardware 17 enables the sub-millisecond accuracy needed to ensure low latency for financial or scientific applications. To add a precision clock device to the VM, you must activate the in-guest device and ensure an ESXi service is activated on the host. You'll have to choose between NTP or PTP on your host. If you choose PTP, you should configure your ESXi host for PTP and vice versa. 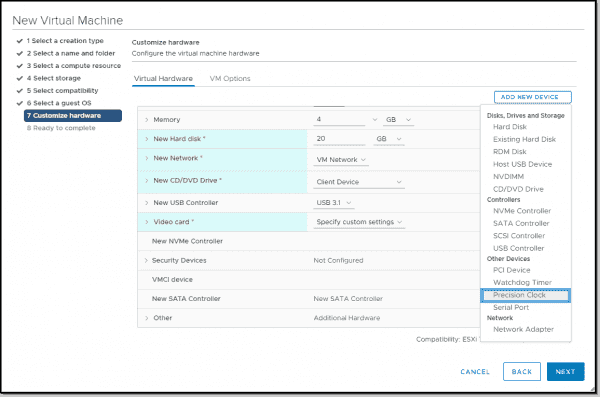 When it comes to scalability, we have some numbers for vCenter Server that indicate the improvements that have been made for the vCenter server appliance. Those numbers, along with other numbers concerning ESXi scalability, will be available after the final release of the product. Some examples include the following:

To schedule a VM compatibility upgrade

There is a simple operation where you can easily schedule the upgrade of VM compatibility. Let me briefly show you the workflow, which has not changed much since the previous release of vSphere.

Scheduling an upgrade of VM compatibility

Note that if you select a VM that is powered off, you can upgrade the VM hardware immediately. If the VM is running, you can only schedule the upgrade to be done at the next reboot. Here is a screenshot of the wizard. 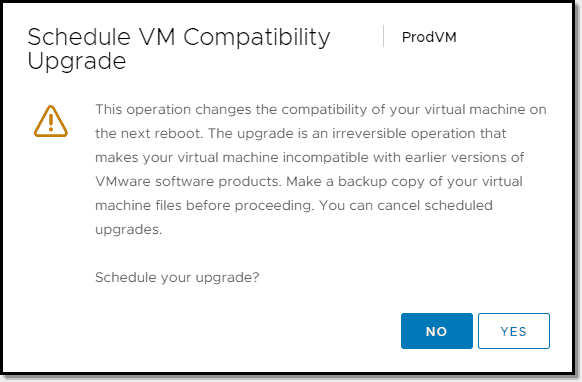 Wizard for scheduling an upgrade of VM compatibility

The wizard then presents you with the possibility of choosing a different version of VM hardware. In our case, our VM has been configured with VM hardware 15 (vSphere 6.7 U2), so we only have the option to upgrade the VM hardware to version 17. 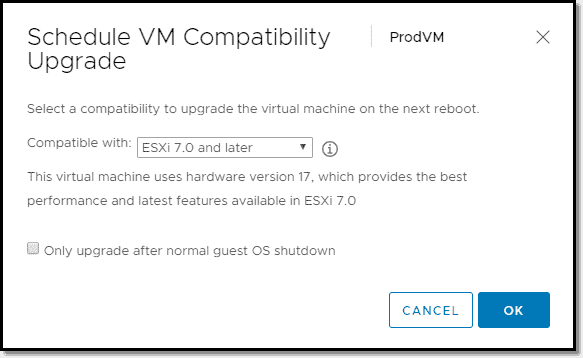 As you can see, the number of new features in the new version of Virtual Hardware will make it possible to "fine-tune" some VMs to run financial applications with Precision Time Protocol or other VMs to run clustered application or databases.

This does not mean that all VMs in your virtual infrastructure will have to be upgraded to Virtual Hardware 17, as you probably won't need these features for all your VMs. But there might be some VMs that can leverage this capability.

Upgrading the virtual hardware of a VM is like changing the motherboard of a server. The workload will be the same, but the underlying hardware changed with a completely new set of features.

VMware recommends changing virtual hardware only if you really need to. In any case, after upgrading your vCenter Server and ESXi, you'll have to update VMware tools on all your VMs. This is mandatory.