Vladan Seget  Fri, Jun 12 2020Fri, Jun 12 2020  hardware, virtualization, vmware  14
VMware vSphere 7.0 and ESXi 7.0 raised the requirements when it comes to CPU and CPU compatibility. As with any major version of ESXi, there are new CPUs that are supported as well as old CPUs that are reaching the end of support.
Contents

This basically means that if you have an older system that has an older CPU, you should check whether this system will be supported with ESXi 7.0. Today's article is focused on vSphere 7.0 and unsupported CPUs.

Before upgrading your ESXi to 7.0, you have to upgrade your vCenter Server. Here is our detailed article: How to Upgrade to vCenter 7.0

When you try to install ESXi 7.0 on a server with an unsupported CPU, you'll see a message like this.

However, there is also a workaround that allows you to bypass the ESXi unsupported CPU check. We'll talk about this later because the workaround is unsupported by VMware.

Note: Due to changes in the partitioning scheme, you can no longer revert to the previous version of ESXi (via SHIFT-R). This was always the case with VMware ESXi; however, now, you'd have to create a backup of the boot device before the upgrade.

There are two family models that are no longer compatible and won't work under ESXi 7.0. Those CPUs were basically made during the 2010 era, so it's about time for them to retire.

The Westmere-EP architecture was based on two- to six-core CPUs, while Westmere-EX was a ten-core CPU model. This was Intel's CPU architecture right after Nehalem (my first lab). It was about 10 years ago, yes.

Now you might wonder how to easily check whether the CPU is compatible and supported or not.

Check the CPU model in the VMware Compatibility Guide

You can check the CPU by going to the compatibility page at VMware.

From the list selection, you can select the ESXi model and CPU series. Then hit the Update and View Results button. 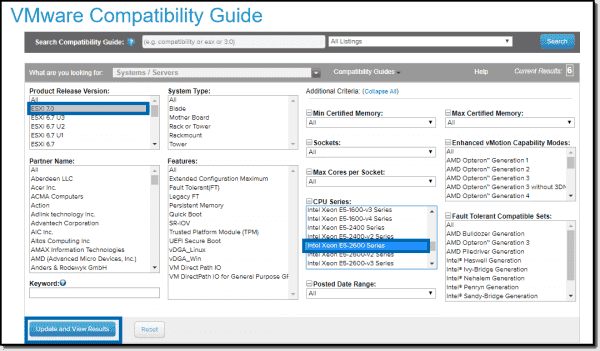 Select ESXi 7.0 and your CPU model

The page will refresh and show you the results of the server model with the CPU and supported ESXi 7.0 version.

If you don't see any results, your CPU is not supported. Try with a newer CPU if you think you're having issues.

Are there workarounds? Yes, of course. The first is advice to someone who is looking to run VMware virtualization software on older hardware. If your hardware is 4–5 years old, you might hit the limit of compatibility (or you will soon), but for now, you should still be able to run ESXi 7.0.

If your system is not listed on the VMware compatibility page, you can still run your ESXi 7.0 on it, but don't expect Support to help you out if you hit some hard problem.

You can still run some less critical production workloads or your company monitoring solution on that hardware, but most likely, you'd want to sell this hardware and purchase newer equipment.

If you still want to run an ESXi 7.0 and you know that your CPU is not supported and your installation gets you to the page with an error message, there is a solution.

Disclaimer: Note that I have not personally tested this solution as I don't have an old CPU to perform the tests. The solution was described in VMware forums and on a few blogs. So, take it or leave it.

You'll have to be directly at the server console or remotely via ILO, DRAC, or IPMI. When you run the installer, use this shortcut:

That changes the screen to the one below and allows you to enter a special parameter that enables you to bypass the validation during the installation/upgrade.

Remember that this is not supported by VMware.

Note that the parameter you entered to bypass the installer will be lost after reboot. If you want to keep this value, you have to edit the boot.cfg file, which is located on the media you're booting from. You may be booting from a local SATA drive, USB stick, or other media, so it depends on your configuration.

There is a "kernelopt" section where you can append this parameter.

This is not advice to proceed or not to proceed. It's a tip, and you can use it if you want. Personally, as I said, I would not use it to "force" a run on a production system, but this can be a perfect fit on test or home lab systems that still work and that can be used for learning or running test scenarios.

As you can see, checking the hardware for compatibility on the VMware site isn't difficult. It might also be interesting to check for network interface cards (NICs), as with ESXi 7.0, many legacy Linux drivers have been phased out. As those drivers were necessary to run, for example, many Realtek-based NICs, it seems those will no longer work under ESXi 7.0. But you can still upgrade your NICs to supported ones or seek another workaround if there is one. Good luck.