Vladan Seget  Fri, Feb 21 2020Fri, Feb 21 2020  virtualization, vmware  0
VMware vSphere Replication (VR) is a product bundled with vSphere without additional cost. The VR product works hand-in-hand with vCenter Server, so if you want to set up a replication to the remote site, you'll have to have vCenter Server installed in the same location as well. VR can replicate VMs from any source storage to any target storage such that they can be local storage or a remote array.

Vladan Seget is an independent consultant, professional blogger, vExpert 2009-2020, VCAP-DCA/DCD and MCSA. He has been working for over 20 years as a system engineer.

VMware VR is a cheaper alternative to more expensive products from vendors such as Zerto or Datacore; in some use cases, however, VR is just good enough for your replication needs. You do not always need to replicate more than 2,000 VMs and have a 5-sec recovery point objective (RPO).

VMware VR uses network replication and hypervisor snapshot technology to create copies of VMs in remote locations. These copies are maintained in an up-to-data state by sending changed blocks of the VMs between the source datacenter and the remote datacenter. The copies of the VM are in a stop state so if your main datacenter goes down, all you need to do is start the VMs at the remote datacenter manually (or via orchestrated restart if using VMware Site Recover Manager [SRM]).

The main advantage of VR is that it is bundled with vSphere and free of charge, compared to the other replication products where you have to pay for a license. However, products like VMware SRM can use array-based replication, which is more efficient (you'll need compatible hardware) and replicate whole LUNs rather than individual VMs, without causing any overhead on your production environment. SRM can also orchestrate failover and failback, and enables you to test those scenarios without affecting the production environment. 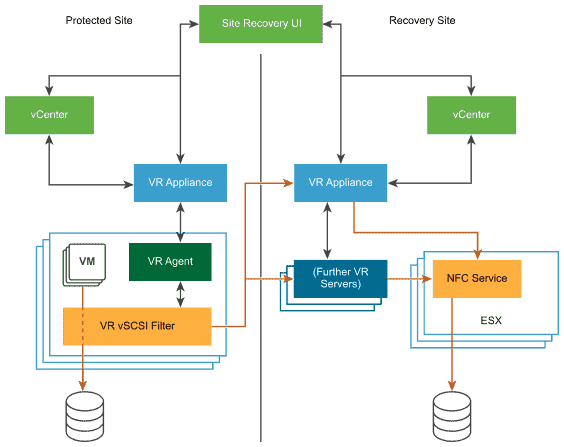 When you set up VMware VR, you'll need to determine the RPO and the retention of instances from multiple points in time (MPIT) that you would like to keep.

You can deploy VMware VR in two different configurations:

Depending on the quantity of VMs to replicate, you might end-up with a consumption of resources that you hadn't initially planned. VMware VR also runs an internal DB where the chunks of VMs are stored; altogether, the virtual appliances consume negligible CPU and memory on the source hosts.

Limitations and disadvantages of VMware VR ^

One of the disadvantages of VR is that you actually need to deploy it within your virtual datacenter and have the product to consume valuable storage, CPU, and RAM resources. VR appliances must run on ESXi hosts at the source and on ESXi at the destination.

Your backup product leverages the same technology as VMware VR to create copies of your VMs at the remote site—it uses hypervisor's snapshots.

However, your current backup product can be configured to replicate from backup files instead of creating snapshots of VMs and putting pressure on your production storage. The replication from backup operates at the block level, so only blocks that are missing are sent to the remote location.

Traditional hypervisor snapshot technology uses replication to create additional pressure on your production environment. Let's say you want to lose only 1 h of work (RPO). This means that every hour, your VMs create a snapshot, and during this time, the performance rapidly decreases and pressure on your storage arrays increases.

Too many VMs that are set with the same replication schedule might add a lot of pressure and consume a lot of resources.

When planning your installation and configuration, you should watch out for:

Let's talk about the VR appliance itself, since this VM also has limitations within the architecture. For example, you can only deploy a single VR appliance on each vCenter server.

The operational limit is 2,000 VMs per VR appliance, so if your environment has further requirements, you'd have to add an additional vCenter Server, create a separate cluster, etc. However, VR needs some additional configuration in order to support more than 500 replications per vSphere Replication Management Server.

It is more efficient to protect your data by using backup products configured either to replicate from backup files or to create additional backup copy jobs to send backups to a remote location. Replication has the advantage that the VMs stored at the remote site are in "stand-by" mode, so they are ready to be started up.

Backup copies need to first be restored to ESXi or vCenter and then only those VMs can be started up. However, backup products have built-in replication functions, and every virtual environment has a backup product already installed. So why not use a backup product for replication as well, instead of VMware VR, even if it's bundled as a free product together with your vSphere.