Wolfgang Sommergut  Mon, Nov 21 2022Mon, Nov 21 2022  virtualization, vmware  1
VMware recently announced the licensing terms, editions, and pricing of vSphere 8. All components, including ESXi, vCenter, and vSAN, are still available via perpetual licenses. However, the vendor announced a switch to subscriptions, which will be made more attractive through a subscription upgrade program.

[prolog]After Broadcom acquired VMware, the new owner said they wanted to quickly transition from perpetual licenses to subscriptions to increase revenue. While the hybrid vSphere+ (released in June) is available only via subscription, VMware currently offers only conventional licensing for vSphere 8.

The two main editions, Standard and Enterprise Plus, are licensed per CPU, but since the beginning of 2020, only up to 32 cores are covered. Processors with more cores require the purchase of additional licenses.

In contrast, there are no restrictions on the size of the RAM or the number of virtual machines that can be run on a host. However, both editions require a Support and Subscription Contract (SnS).

The Acceleration Kits are designed to simplify the purchase of vSphere and are available for both editions. Each kit comprises licenses for six processors and one vCenter instance. An SnS contract is also necessary with this purchase option.

The components contained in the kit are licensed separately so that an individual upgrade is possible.

In contrast, the Essentials Kits are fixed packages whose components may not be combined with other editions. They are primarily aimed at smaller companies. Each kit comprises six licenses that can be used on a maximum of three hosts with two processors each. It also includes a license for vCenter Server for Essentials.

The Essentials are available in a basic and a Plus version. The latter adds more advanced features, such as vMotion, HA, and vSphere Data Protection. The following table presents a feature comparison:

In addition to the main editions and kits, VMware also offers licenses for special purposes. These include vSphere Desktop, which includes all the features of Enterprise Plus but may only be used for desktop virtualization.

There are also the Standard, Advanced, and Enterprise versions of vSphere Remote Office Branch Office. As the name suggests, these are intended for branch and remote offices. Each package includes a license for 25 VMs; vCenter must be purchased separately.

Finally, there's vSphere Scale-Out, which includes all the essential features for Big Data and high-performance computing (HPC). It is sold in packages of eight CPUs each.

The free vSphere Hypervisor, which is only suitable for small environments and cannot be managed via vCenter, plays a special role. Besides the limitation of eight vCPUs per VM, it is subject to further technical limitations.

VMware sells licenses mainly through partners. A good place to look up current pricing is the VMware Store. 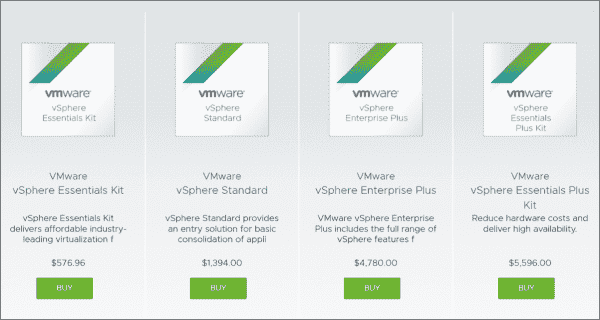 Prices for the most popular vSphere editions in the VMware Store

Prices for the most popular vSphere editions in the VMware Store

In a lengthy blog post, VMware prepares its customers for the transition of its licensing model. However, the article remains quite vague.

Nevertheless, it is clear that the vendor wants to offer most of its products via subscriptions. Customers will still be charged per core, whereby VMware plans contracts with terms of one, three, or five years.

VMware offers two license types for this: On-Premises Licensing and Cloud Connected. The latter requires a permanent Internet connection, but does not need any license keys. The on-prem variant, on the other hand, works offline but requires the management of license keys, as with perpetual licenses.

The blog post confirms that on-premises licensing will be retained for existing customers. This implies that new customers can choose only the cloud model.

In addition, VMware wants to motivate its customers with Subscription Upgrade Programs to switch from permanent licenses to the subscription model. However, the blog does not give any details as to how high the vSphere rebates will be. An older program for Horizon offered a 20–25% discount.

The switch to short release cycles also fits in with the concept of software subscriptions. VMware recently announced this in the form of a two-stage release process.