Vladan Seget  Wed, Apr 1 2020Wed, Apr 1 2020  storage, virtualization, vmware  1
VMware vSAN 7.0 (part of vSphere 7.0) brings some key improvements to this release of vSphere. VMware vSAN is a vital part of not only VMware-validated designs but also all vCloud offerings, such as VMware Cloud on Amazon Web Services (AWS).

All VMware Hyperconverged Infrastructure (HCI) offerings have vSphere and vSAN as storage, so vSAN is crucial to VMware and represents a key storage element.

VMware tightly integrates vSAN into vSphere and ESXi. This release also adds some new services, such as native file services.

The information we have comes from a blogger's briefing during the prerelease phase.

Native to vSphere, a new desired-state model monitors compliance drift from a template. Admins will be able to apply a patch or upgrade to keep the infrastructure up to date via a new tool, which replaces vSphere Update Manager (VUM).

It makes sense to have per-cluster settings because we configure VMware vSAN per cluster, and it uses similar or the same hardware across its clusters. We can now control the firmware and driver combination on every node in the cluster at the cluster level. 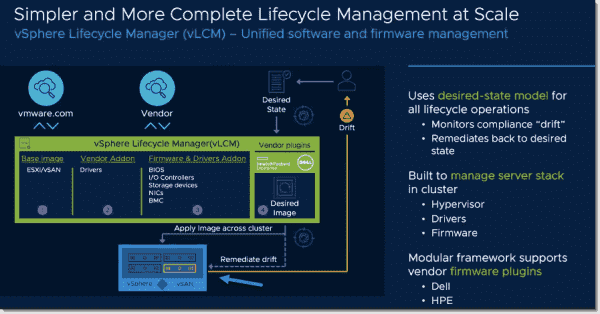 The cluster image is a new construct comprising firmware, drivers, vendor add-ons, and the ESXi image build version. The key here is the "desired state" model.

The image below from VMware shows the details. 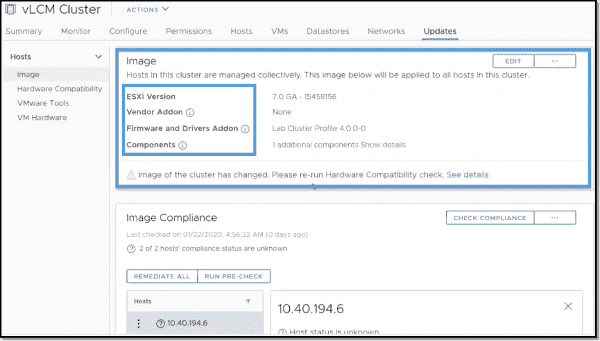 So now after you set the drivers, firmware, and ESXi image, you can remediate all noncompliant hosts.

Compared to vSphere Update Manager (VUM) in previous releases where you only managed ESXi images, vSphere 7's image management includes drivers and firmware versions. This is essential for VMware vSAN.

VMware vSAN 7.0 will have fully integrated file services with support for NFS v3 and v4.1. You can add the file services as additional storage space usable for applications. You can have virtual machines (VMs) as well as cloud-native applications needing persistent volumes running side by side on the same vSAN cluster.

The admin can provision vSAN cluster capacity and create file shares with quotas and other elements directly within the vSphere Web Client. There is no need to go out to the filer and do this operation outside vSphere.

However, vSphere file services are no replacement to your traditional large-scale filers, so you might use these side by side. 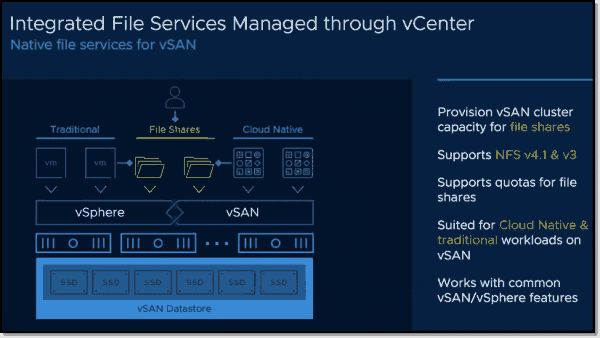 This is a cluster-level file service within VMware vSphere. It will align with the current management capabilities of vSAN and provide a better set of features for datacenter admins.

The new assistant for configuring file services looks like this (within the vSphere 7 Beta): 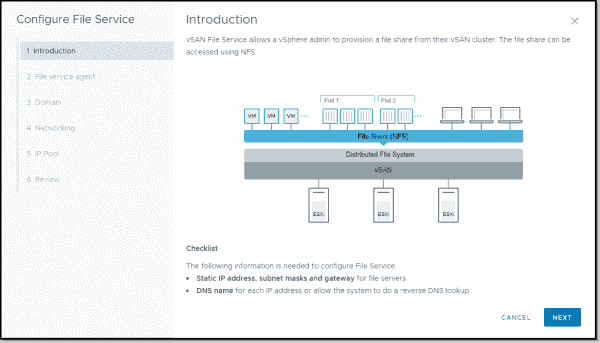 Within a vSAN environment, there will be file-based persistent volumes on vSAN. Admins will be able to integrate storage classes associated with pods and see how these relate to the assigned storage policies.

So during initial provisioning of containers with apps, you'll be able to use automated placement based on storage policies.

vSphere 7 will also support encryption and snapshots, volume resizing, and a mix of tools, such as Wavefront, Prometheus, and vRealize Operations (vROps). 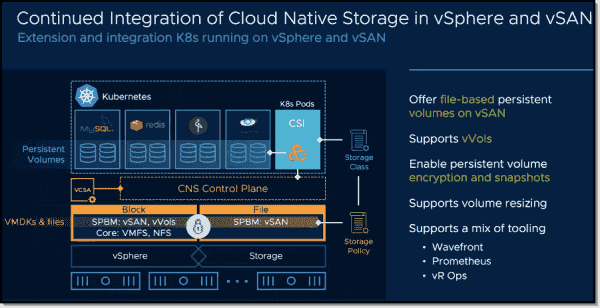 In previous releases of vSAN for two-node clusters, admins had to go to the command-line interface (CLI) and set a default getaway for hosts that were part of vSAN. The new vSAN 7.0 will have an option within the configuration GUI to set different default gateways. 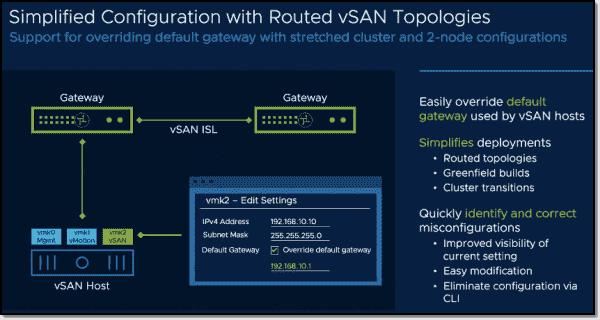 The cluster configuration with routed topologies will be easier for admins, even though the one or two commands necessary to set a static route weren't that difficult. However, the GUI will provide a way to see this configuration now, which wasn't the case before.

VMware Distributed Resource Scheduler (DRS) and vSAN are the best for VMs running in this topology when you have an outage on one site and there is, for example, a link failure. VMware High Availability (HA) will restart your VMs at the preferred site.

However, when the link came back, DRS will first let the resync between sites finish before trying to rebalance the VMs to enable equal loads on both sites. So VMware has added some new intelligence here. 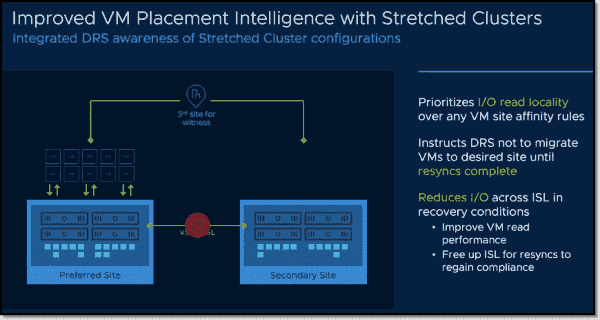 We have not talked about more added features here because we will first need to test these features in our lab and will report on that afterward.

VMware vSphere 7 and vSAN 7 is an evolution of an already mature product. It offers smooth improvements with some nice additions for file services, stretched clusters, and intelligent operations.

As they add more and more services, they can cover more use cases. Previously, one had to rely on external file services, while with vSphere 7, admins will be able to provide file services to modern applications from within the vSphere GUI. It is not a revolution, but it will be more convenient.

The firmware and driver management on a per-cluster basis for vSAN configurations will definitely ease some pain that previous releases struggled with, and many manual actions and verifications had to occur on a per-host level. With the new vSphere 7 cluster image management, we can push the same configuration to all hosts part of the vSAN cluster, thus maintaining the same level of firmware/driver combinations.