vCenter Server operations are quicker since vCenter is able to handle more operations per second. Here are the details from VMware's testing:

These optimizations will improve overall speed and latency. Clients will see reduced resource consumption due to DRS and reduced latency to generate VMotions for load balancing.

vCenter Server architecture now has a clear vision since with vSphere 6.7 update 2, VMware deprecates the use of external Platform Service Controllers (PSCs) and uses an embedded PSC installed together with vCenter Server.

This architecture is not only simpler to maintain but also supports vCenter Enhanced Linked Mode where you can link up to 15 vCenter Server instances in the embedded PSC topology. With this simplified architecture, you don't have to deploy load balancers.

VMware Quick Boot is new feature introduced in vSphere 6.7 U1. If configured, the host boots faster; it can skip BIOS POST entries and just boot without going through the slow hardware check on I/O devices.

As you know, a regular reboot involves a full power cycle that requires firmware and device initialization. Quick Boot optimizes the reboot path to avoid this, saving considerable time in the upgrade process.

It works, and it's configurable via vSphere Update Manager (VUM), so your patching and upgrades complete much more quickly. Not all servers or configurations support the Quick Boot feature. VMware is working with major server hardware vendors.

The Update Manager UI will present Quick Boot as an option for servers that support the feature. If your hardware isn't supported, the option will be grayed out.

These improvements will allow you to run very large enterprise applications, such as SAP HANA or other intensive enterprise workloads.

vSphere 6.7 has introduced persistent memory (PMem), a type of non-volatile DRAM (NVDIMM). It has approximately the same speed as a traditional RAM module, but the difference is that it can retain content across reboots—something traditional RAM cannot do. 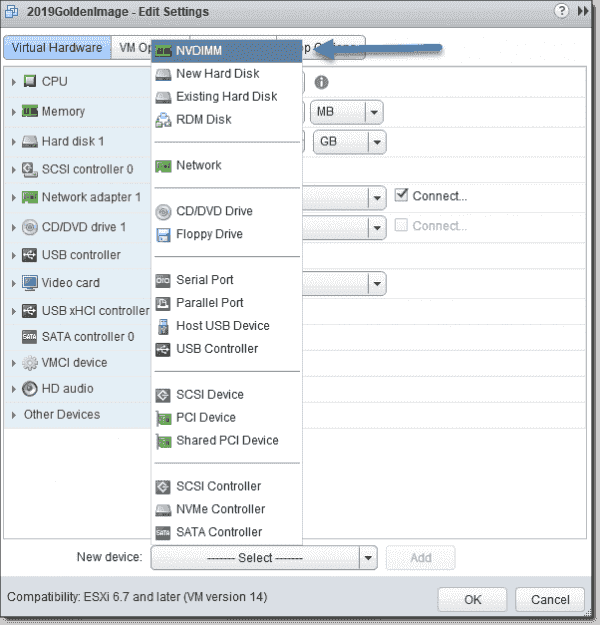 This release has some limitations, however, so if you want to use this technology, you must be aware of the following:

VMware has observed that vPMem can improve performance by up to 1.8x better throughput and 2.3x better latency compared to standard SSD technology.

As for storage, VMware has improved storage stacks by adding the possibility to connect even more devices and attach more disks, compared to what was possible in previous release.

There are some improvements to vSphere 6.7 ESXi host storage maximums, which you'll find below:

VMware vSphere 6.7 has the new vmxnet3 driver version. The latest version is version 4, supporting some new features, for example:

Offload for Geneve/VXLAN – Generic network virtualization encapsulation (Geneve) is a protocol used with the NSX-T product. So Geneve and virtual extensible LAN (VXLAN) offloading is now available in the vmxnet3 v4 driver. Performance testing of this feature showed a 415% improvement in throughput in a test that used a packet size of 64 K with eight flows.

Some of the latest native drivers support Mellanox hardware, which is very popular in enterprises.

The new virtual hardware version 15 made its appearance, which, as said, can bring some performance improvements for CPUs (up to 256 vCPUs per VM) and memory (up to 6 TB of RAM per VM).

VMware is continuously improving the vSphere suite to keep everything up to date and improve what needs improving. The vSphere 6.7 U2 announcement caught a lot of attention, but VMware hasn't specified when this version will be available for download.